b/w I’ve Been Good To You

b/w I’ve Been Good To You

The Miracles were nothing if not prolific. This was the group’s eighth Motown single, and their fourth in 1961 alone – and that’s only counting the double A-side Broken Hearted / Mighty Good Lovin’ as one. For added measure, they’d also managed to get two studio albums (Hi! We’re the Miracles and Cookin’ with the Miracles) under their belts by the end of the year; this single was the first appearance of material featured on what would become their third LP, I’ll Try Something New, the following summer.

Perhaps unexpectedly, following a lengthy series of Miracles singles which had performed respectably on the charts but failed to emulate the massive million-selling success of breakthrough hit Shop Around, What’s So Good About Good Bye was their biggest hit since then, striking a chord with fans and landing in the Pop Top 40 and R&B Top 20.

Smokey and the group had been making strides with each successive new LP, and this record certainly sounds like a(nother) step forward from their previous material. For a start, Smokey had never sounded as good as this; confident, playful and immediately likeable, and now with an added vibrato on almost every note, he gives a quite splendid vocal performance, underlining his status as both Motown’s most distinctive male vocalist and also its most promising. (Check out his totally-unexpected, takes-it-in-his-stride break into a falsetto semi-yodel at 1:38. He’s a star.)

This was also the first Motown Miracles A-side to prominently feature their guitarist, sounding board and sometime songwriter Marv Tarplin, an essential part of the Miracles mix since Smokey stole his services from friends and neighbours the Primettes (later Supremes). Marv takes his cues with panache, providing two front-and-centre guitar parts – an ominous opening plucking bit played in tandem with the bass, and then starting at 0:38 a series of twangs at the end of each line of each verse, almost country & western in their effect but totally necessary for the success of the record as a whole, slotting in as effortlessly in the foreground as he previously had in the background.

Plus, like the previous effort Everybody’s Gotta Pay Some Dues, it’s swathed in a lavish string arrangement orchestrated by Riley C. Hampton, giving the whole thing a stately, confident vibe.

As well as the guitar parts and some neat harmony touches throughout the song, it also features an extended intro – like …Dues – which marks out the first few lines before a change of rhythm and tempo brings us into the song proper. Unlike that previous effort, though, the “intro” metre comes back in for a closing coda, effectively bookending the song with a kind of framing device. Again, Smokey the songwriter was developing his craft at a rate of knots, and this development would really bear fruit in 1962. 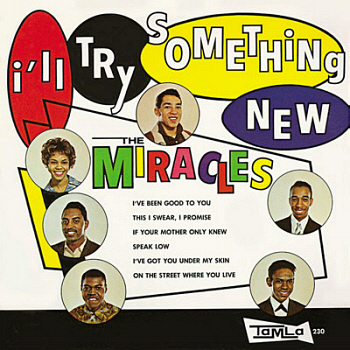 I say that because it doesn’t necessarily bear fruit here in December 1961. I’ve always found this song slightly unsatisfying, for reasons I find it difficult to put my finger on precisely; for sure it’s far less affecting than some of their best work to this point, and it certainly comes off worst when put up against the lovely …Dues.

For a start, compared to the heartfelt paternal message in its predecessor, the lyrics to this one are far more obtuse, Smokey putting a lot of faith in the listener finding the song’s best lyrical idea, the semi-pun in the title, to be witty and charming (the same semi-pun which you’ve already got bored of by the time you put the record on the turntable, that is). If you don’t find the central notion – that “goodbye” is ironic because being separated isn’t “good” – to be tremendously clever and worthy of applause, things start to unravel pretty quickly.

(Smokey breezily admits in the liner notes to The Complete Motown Singles: Volume 1 that that central conceit wasn’t even his idea, having been lifted wholesale from some film dialogue he happened to watch while working on the song.)

As a confirmed die-hard fan of Smokey’s lyrics, it comes as a surprise to discover that the rest of this song, a much-vaunted supposed early example of Smokey’s sublime skills with wordplay, isn’t actually up to much on the lyrics front – either in terms of either emotional content or clever wordsmithery. (Perhaps it’s some form of category error in the brain; this is Smokey Robinson, he sounds amazing, I’ve heard this is one of his most playful, poetic early lyrics, I hear a lot of quick-draw half-rhymes… this must be great!)

Apart from the lyrics, the other problem with this record is that it’s all surface and no feeling – a collection of neat musical ideas, smart touches, great performances, but no killer tune underneath, no moment of inspiration to build on.

Case in point: when we get to the chorus, the Miracles sing “What’s so good about it…? and a string flourish strikes up, and it sounds as though it’s going to feature the group doing a repeated melody line on backing vocals in harmony with the band (“What’s so good about… goodbye? What’s so good about… goodbye?” or something), while Smokey sings counter to the tune, much in the style of early masterpiece Way Over There, where such a trick had been employed to devastating effect – but it doesn’t. No, instead, the Miracles do sing What’s so good about goodbye?, but perfunctorily, as a second line apparently solely there to end the chorus at really high speed and get us back to middle C so Smokey can start the verses from where he needs to be. As a result, the chorus just sort of peters out, leading inescapably to the conclusion – something of a shock, too – that Smokey may have been running short on ideas when writing this particular song.

Indeed, the song has probably the weakest tune of any Miracles single since Ain’t It Baby, which is perhaps the real root of my dissatisfaction, I guess: it’s a thin, minimal number at heart, something which might have worked as a sparse, acoustic torch song for someone to strum out for an intimate audience, but absolutely doesn’t have the guts to justify such a gorgeous, full-on anthemic epic single treatment by Smokey Robinson and the Miracles.

So, yeah. It sounds really good, but stripping away the quality of the performances, it soon becomes clear it’s really not one of Smokey’s best songs. He probably knew it, too; he’d done better before and would do (substantially) better in the future. Meanwhile, there’s still plenty to be said in its favour: it was the Miracles’ ticket back into the Top 40 and back into hitmaking commercial relevance; it showed Smokey the songwriter pushing his boundaries ever further (even if there wasn’t a killer tune at the core this time); it sounds superb. It just isn’t as good as it first appears, or as it manifestly might have been, which is… Well, let’s stick with unsatisfying.