After the nadir of his last single release, a horrible whitebread cover of the Chordettes’ Mr Sandman, Marvin Gaye’s fourth single is a welcome step back towards the path which would eventually lead him to the pantheon of the all-time greats.

The parallels between this and Eddie Holland’s (If) Cleopatra Took A Chance, released the previous day, are worth noting. Both were written by the same writing teams, both recorded less than a week apart at the end of April 1962, and both rush-released virtually straight out of the studio as Motown tried to cash in on a current trend.

With Holland’s record, that trend had been the imminent release of the Cleopatra movie; this one, meanwhile, was apparently a bid to cash in on the success of the Shirelles’ lolloping, gorgeous Soldier Boy, which had just shot to the top of the pop charts. Marvin Gaye had been searching for both good material and a musical identity, having gotten sidetracked down a commercial cul-de-sac by MOR croonerisms; he’d shown he could handle music from the easy listening end of the pop spectrum, but he was also keen to sell more records, do something for the teenagers – something “in a commercial bag”, as he put it – yet without compromising his chances of being the new Nat King Cole. When Berry Gordy demanded Motown release a record to capitalise on the Shirelles’ success with Soldier Boy, Marvin was a natural choice.

(You would think, perhaps, that Motown might have learned its lesson over hitching a ride from the Shirelles, what with the expensive legal fiasco over the Satintones’ own Shirelles “homage” (i.e. unabashed rip-off) Tomorrow and Always the previous year, and maybe steered clear of this plan. But no.)

Ah, Soldier Boy… I love that record. No, you shut up, it’s beautiful; unaffected and unashamedly pretty, and if you’re going to call it lift music, it’s lift music that goes straight to the top floor. It’s everything that Marvin’s Mr Sandman isn’t. But I digress. 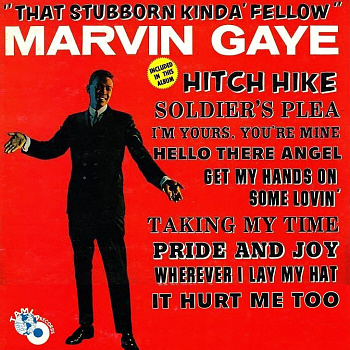 So. Marvin Gaye’s Soldier’s Plea, then, is an “answer record”, in the most literal sense. The music is similar to the Shirelles’ hit, but not so similar that it sounds like a knock-off; while Marvin’s record lacks the delicate beauty of the original tune, it has a fine and affecting tune all of its own. A sparse arrangement, opening with cod-military drum flourishes and later a trumpet solo (shades of Miles Davis’ Saeta from Sketches of Spain) and featuring minimalist deep male backing vocals and very little extraneous instrumentation, sees Marvin literally answering the Shirelles’ concerns by pledging he’ll be faithful.

It’s simplistic, and a little naïve in its unswerving patriotism (let’s not forget that Marvin’s 1971 LP What’s Going On, a concept album about the travails of a returning Vietnam War vet, could just as easily have been titled Soldier’s Plea). Importantly, though, it’s also the best thing Marvin Gaye had recorded to date, by a country mile; great big seven-league boot-strides ahead of the schlocky standards and cheesy jazz-lite of his simpering 1961 début LP, The Soulful Moods of Marvin Gaye. It’s the first really good vocal performance he’d committed to vinyl, and the first inkling that this guy was Marvin freaking Gaye, the same Marvin Gaye who, less than five years later, would cut I Heard It Through The Grapevine. His vocals are excellent throughout, but check out his delivery on the final verse (at the end of the lengthy trumpet break), starting from 1:43: “We all must do our share / And darling, I don’t mind…” – the slight, almost-imperceptible half-laugh in his voice there gets me every time – “…The only thing that’s grieving me is leaving you behind / Just say you’ll be my girl, and always be true / And I’ll be a loving soldier boy / I’ll be a faithful soldier boy / I’ll be a loving soldier boy to you.” It’s the Marvin Gaye we all know and love, ready at last.

Perhaps I’m overselling this. Time to scale back a bit. It’s not perfect, certainly not. It flopped on release, just like all Marvin’s other records had done up to that point. It isn’t even close to the best of Gaye’s later work, to the point it’s never (as far as I’m aware) been anthologised on any Best Of compilation, nor cited as a turning-point in a career retrospective. But then maybe that’s because people haven’t been able to put this in its correct setting, having been unable to look past the context – it is, after all, an answer record, and an answer record to an ostensibly-ephemeral bit of supposed pop fluff.

(I totally disagree with that, as I’ve hopefully made clear already, but even if you don’t, well, who’s to say ephemeral pop records can’t be life-changing? Not me, and not many other Motown fans, I’d wager).

People note, correctly, that on the surface this is closer to Mr Sandman than to Marvin’s upcoming raucous R&B hits (Stubborn Kind Of Fellow, or Hitch Hike, or Can I Get A Witness, for instance.) But that, to me, is missing the (turning) point.

Marvin Gaye spent his entire life locked in an internal battle, at once desperate to please a string of others (his father, his wife, his lovers, his fans, his label, God) whose approval would never give him the satisfaction he really wanted, and at the same time trying to stay true to his own deeply-held convictions without compromising his art for the benefit of others.

Posterity is a funny old game, and the pendulum of critical opinion swings back and forth most unpredictably; at the time of writing, it’s widely held that the best of Marvin Gaye’s records came about when Marvin did what Marvin wanted, and conversely that his worst efforts were when he was most obviously trying to please others.

(Me, I think Marvin Gaye was responsible, alone or in tandem with Tammi Terrell, for no less than twelve of Motown’s best singles of the Sixties and early Seventies – Soldier’s Plea certainly not being among them – and I also rank three of his Seventies LPs (What’s Going On, obviously, but also Let’s Get It On, song for song a stronger album, and the jaw-dropping Here, My Dear) as some of my favourite albums of all time. Not sure how this fits that theory, but there we are.)

Anyway, it seems to me that Soldier’s Plea is in many ways the real start of Marvin Gaye’s career, for better and for worse, encapsulating that conflict in one brief record. It’s possible to look at it in two distinct ways – either it’s a fluffy, inconsequential response to a fluffy, inconsequential record, or it’s the first actual step Marvin Gaye ever took towards becoming a bona fide chart star, and the first time he actually put his soul into a record, dark places and all.

I think that’s why I like it so much, when on paper I really shouldn’t. This actually does call for Marvin to deal with some weighty themes, not least his narrator’s possible impending violent death in the service (treated casually as a minor stumbling-block getting in the way of the main love story on offer here, but he puts feeling into his delivery like he hadn’t done before; he had in fact enlisted briefly in the Air Force, subjecting the troops to a short round of bitter insubordination before dropping out by pretending to be crazy).

I really rather like this. Your mileage may vary. Certainly, though, for me at least, this is the first really good Marvin Gaye record, and in no small part because it’s also the first one that actually sounds like a Marvin Gaye record. This marks the end of Marvin’s development from amateur MOR crooner to serious pop contender; next stop, the charts.