B-side of The Way You Do The Things You Do

B-side of The Way You Do The Things You Do 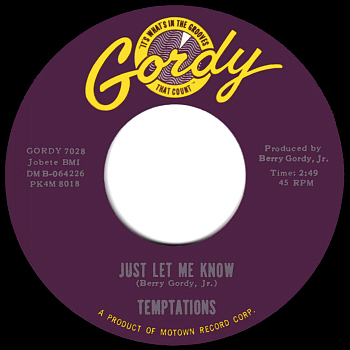 Supposedly, this was the song Berry Gordy composed especially for the Temptations’ new single, only to be outvoted by Motown staffers who preferred Smokey Robinson’s bid, The Way You Do The Things You Do. Something of a kick in the teeth for Gordy, who saw the best pop song he’d written in at least six months relegated to the flipside. This had been his bid to get back to the creative front lines, and whilst being forced to back down after a brief (friendly) clash was undeniably the correct commercial decision, it must have wounded the boss deeply. Smokey, in the friendliest way possible, had asserted his position as the songwriting top dog of the two.

Talking of laying down markers, which we weren’t really but anyway, this is pretty darned impressive from a vocal perspective too. The influence of the Beach Boys’ records up to this point is all over this in the verses, Rufus Thomas in the chorus, even if neither of these references is intentional. It’s a stomping mid-tempo pop-R&B ballad blessed with a genuinely great chorus and a bright, shining guitar part underpinning the whole thing which deserves a medal all on its own.

The real highlight, though, is Paul Williams, once the group’s de facto lead singer, here delivering one of his last great lead vocals for the Temptations.

(That’s surely no coincidence – this was recorded at the last Tempts session Al Bryant took part in, the last session before David Ruffin’s arrival in the group put the sandpapery bespectacled cat among the lead vocalist pigeons.)

Paul’s on splendid form here, his sweet-yet-raw lead presaging the great work Ruffin would turn in further on down the line, essentially doing Paul out of a job – but this is a great reminder that with their imminent new arrival and alongside the ever-improving Eddie Kendricks, the Temptations would indeed have three bona fide claimants to the title of lead singer. Paul’s interplay with the Eddie-led group sections is inspired, and this must rank as one of Williams’ very best leads.

Not as emotive, innovative or fun as The Way You Do The Things You Do, dropping it was the right choice – but had it been selected as the A-side, this would still have been the best Tempts single since Gordy’s own Dream Come True two years previously. The phrase “hidden gem” is overused, not least by me, but it certainly applies here.