b/w Go Ahead And Laugh

b/w Go Ahead And Laugh

(Released in the UK under license through EMI/Stateside Records)

Regular readers will know that, while I adore a banging 4/4 Northern Soul stomper, I’ve got a real weakness for big, grandiose ballads with pretty tunes and the turning circle of a supertanker. When they’re done well, that is – the line’s none too fine between, say, Brenda Holloway’s I’ll Always Love You and some eight-minute dirge by Celine Dion, but it’s there all the same. Luckily, Motown’s grand gestures usually earn their bombast with a lovely melody. And so it goes with Kim Weston.

Kim – who, for the uninitiated, wasn’t just Marvin Gaye’s duet partner, but a fantastic solo artist and probably Motown’s best singer – has seen action in these trenches before, her lovely rendition of Just Loving You giving listeners a hint of the remarkable power in her voice that a golden “slowie” could help unleash. This, her fourth solo single, is very much a follow-up to that record – but it’s a tidier piece, better-produced, and moreover it’s a happy song. As Marvin Gaye had already discovered, Kim always sounds great when she’s got with a smile on her face.

Motown weren’t so sure. Now that Mary Wells had left the company, there was an obvious opening for a female solo star. When Kim beat out competition from Brenda Holloway, Oma Heard and Carolyn Crawford to become Marvin Gaye’s new duettist, it must have seemed as though she had the gig sewn up. Next stop, fame and fortune.

But then the landscape changed; three Number One hits in a row from the Supremes, and big radio hits for the Four Tops, the Temptations and Martha and the Vandellas, meant that with the exceptions of Stevie Wonder and Gaye himself, Motown wanted to put its money behind groups, not solo turns. Kim and Marvin’s proposed, half-finished duets LP went back on the shelf, and this single found itself withdrawn from sale before any copies had even reached most stores. It’s now one of the rarest and most sought-after Tamla 45s.

(The same fate didn’t befall the British release, which not only appeared as scheduled, but also spawned an EP (pictured) the following year after a positive reception.)

It’s unfortunate, really, because everything about this is an improvement on Just Loving You. The tune is stronger, moving away from the lounging jazz-blues of that record and towards a new, mid-Sixties smooth R&B-pop feel instead. The whole thing’s taken at a slightly faster lick, which gives it more impetus, more of a swinging feel – it’s only being pushed along gently, sure, but it’s being pushed along all the same. If the blazing horns at the start of Just Loving You are sadly missed, they’re replaced by what sounds like a full string section, soaring into the heavens with a Hollywood overture. When the record strikes up, you half expect Doris Day and Rock Hudson to appear from stage left. 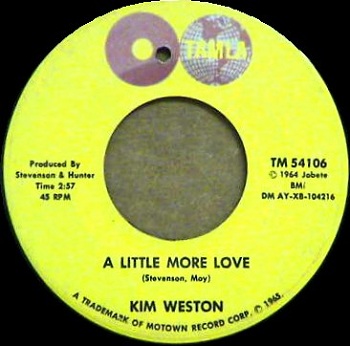 Best of all, though, is Kim herself. She’s not getting stronger or louder – oh, she’s still powerful alright (check out the full-on OH, just ignore it! at 1:50, probably the biggest note she’s yet blasted at us, followed by the throaty exclamations right after – she sounds amazing), but she already had the pipes, right from the start. No, it’s that she sounds so much more at ease with the material here, it’s a performance of remarkable judgement, showing a new level of grace and sophistication to go with the coruscating vocal. As she runs down a checklist for her partner to follow –

Just squeeze my hand instead of a mere hello
Kiss my cheek while we sit in the show
Oh, whisper softly whenever the lights are low…

– you’re right there with her. It’s not easy to deliver a line like make me know you’re mine and stay sympathetic, never mind seductive, but Kim’s got it covered.

The middle eight is just remarkable; over a bed of crashing, echoing drums, Miss Weston goes into a strange new rhythm structure where the second half of each sentence gets wrapped onto the first half of a new line, and gunned out at double speed in a staccato semi-rap that sounds even more arresting thanks to Kim’s deep, smoky voice:-

Probably Kim’s best vocal performance to date, this comes across at first like a low-key song sung in a massive style, if that makes sense – but the tune is insidious and you’ll be humming it before you realise what’s happening. I’ve found myself liking this record more and more each time I hear it.

I don’t know why Motown pulled it so abruptly before it had had a chance – maybe they were cutting back on the big ballads, following the failure of Brenda Holloway’s recent similar efforts? – but it was America’s loss, because there’s nothing much wrong with this record at all.