(Released in the UK under license through EMI / Tamla Motown Records,
credited to “The Detroit Spinners”)

Before I get into the review, a thought just struck me – is this the first time here on Motown Junkies where we’ve had two completely different songs sharing the exact same title? I can’t be bothered to check right now, but I don’t think we’ve had this situation before. Anyway, it’s worth noting that this is most assuredly a very different proposition to Brenda Holloway’s stately torch song of the same name – this one is another splendid Motown R&B-pop jewel in what was shaping up to be a whole golden summer of these things. Talk about your production line.

The Spinners’ Motown début, Sweet Thing, had been a thrilling but uneven mess – too many ideas jostling for prominence, inspired moments nestling alongside mediocre ones, and (most damagingly) a missing chorus. No such problems here; I’ll Always Love You has the kind of soaring, emphatic chorus which most groups spend their whole careers hoping to find, but which defines so many of the Spinners’ best Motown cuts. This is the first of them.

Strangely, that fantastic chorus (which erupts from nowhere in a blizzard of horns and backing vocals) feels like it’s been transplanted from another song altogether, taking us into new territory even higher above the clouds. The time signature changes abruptly, a staccato beat masking the switch as if we’re running up the steps of Hitsville – the same trick so neatly employed by the Four Tops on Ask The Lonely.

The influence of the Four Tops is all over this. Of all the Motown records we’ve seen since the Tops’ magnificent breakthrough with Baby I Need Your Loving, this one comes the closest to recapturing the best of that song: the tune, the arrangement, the sound, the feel, the rush. 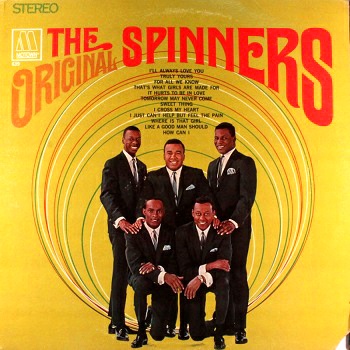 Oh, the Tops would have been delighted to cut this. Usually, encouraging a direct comparison with Levi Stubbs is a foolish move, but Bobbie Smith, at this point still the lead singer of the Spinners, was – is – one of the most underrated Motown vocalists, and this is another showcase performance. Just like Levi, he corrals the rest of the singers – the other Spinners augmented here, just as the Tops so often were, by the angelic female harmonies of the Andantes – into providing him with freedom to roam, safe in the knowledge the tune is being carried.

And then, just like Levi, he harnesses those harmonies to his advantage: two narrators, each desperate to save a relationship, each turning to the magical power of pop music to make his case, as if the forces of nature were allied with the forces of romance by the will of the pop gods.

Where the Tops’ narrator used them to bolster his desperate plea, the Spinners’ purpose is to underline the sincerity of Bobbie’s declaration of undying love. The effect is just as astonishing here; by the time we hit the magnificent coda, the buildup reaching such an intense heat that each line is stacked up ready to fire before Bobbie launches it right at the listener’s heart:

Though the sun may burn out
Though my plans may never turn out
Girl, you know that I
Will be loving you till I die!

…well, we’re clearly in the presence of a very special group indeed.

There’s not a huge amount I can say about this that I haven’t already covered when talking about Baby I Need Your Loving, as all the things that made that one great are pretty much the same things that make this one great. But it’s no mere clone, or a pastiche of a better song; the thrills and pleasures here, of which there are so many, are derived from different sources, even if the ultimate effect is the same. That it happens to remind me, strongly, of one of my all-time favourite records (indeed, using several elements directly lifted from one of my all-time favourite records!), without ever once feeling like a rip-off, a pale imitation, is to its enormous credit.

It’s the very definition of a Golden Age, when even the supposed second-string acts can turn in a record as amazing as this at any time, without warning. Motown must have wondered where all these guys were coming from.