b/w Take My Hand (promos only) 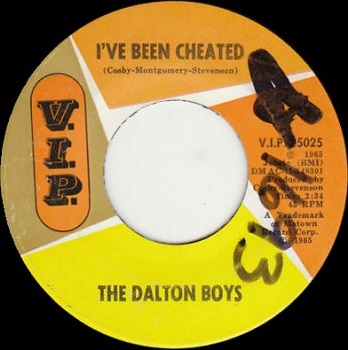 A couple of weeks ago, I read some criticism of this blog from someone I’ve never met, stating that I need my head examined because I hate all white artists who recorded for Motown, as well as most of the lesser-known black artists. Utter pish, I shouted, quite loudly. (Because it is pish, obviously.) But then I look back over the course of the blog, and I can see where they were coming from. While I’ve been happy to champion the cause of several little-known acts, it has to be said that for a lot of the more obscure would-be stars whose lives only briefly intersected with the Motown story – a group, of course, which contains a disproportionately high number of the label’s Caucasian signings – well, their obscurity is easily understood: often, they just weren’t really all that good.

And on that note, here come the Dalton Boys.

I love the way this one starts out; according to the liner notes for The Complete Motown Singles: Volume 5, these guys started out as a folk band, but I’ve Been Cheated is squalling R&B all the way. In fact, it’s even more of a blatant lift from the Supremes’ Back In My Arms Again than the Four Tops’ Something About You a couple of weeks ago: co-written by two of Motown’s top writers, this is as far from gentle folk as you can get. The drums and horns are the Funk Brothers through and through, and they drill the beat right down into the listener’s skull in fine fashion. Yeah!

But the song loses its nerve too fast; the lyrics are at odds with the weedy vocals, the chorus is limp, and the whole thing feels like a waste of an excellent band track. I want to like it, I really do, but it keeps annoying me, and it ends up as yet another substandard attempt to make an ersatz British Invasion record, just one more crappy Motown Merseyclone. Except now, we’re also wasting a fine Motown off-the-peg backing track that should by rights have ended up on a Temptations record or something, and instead finds itself the only holding up a shaky edifice like this thing. Damn it.

No, but really, what the hell is going on with these lyrics? The narrator – or narrators, as this sounds like more than one guy singing lead at the same time, perhaps in order to beef up the thin vocals in a primitive version of double-tracking – spend(s) the entire song alternately threatening their girlfriend that they’d better not leave and then calling her a no-good cheater. The message is mixed up – is this an angry break-up song, or is the narrator saying “okay, now don’t do it again please?”, or what? Either way, I’m not convinced she’s even listening any more.

Plus, whatever the message is, the Dalton Boys are too weak as singers to really get it over anyway. It’s not entirely their fault, the lyrical stresses and the vocal melody of the song are all messed up, which doesn’t help them at all (there’s an agonising bit where the Boys have to try and squeeze a multipart harmony on the words “be true to me” into a space where they just won’t fit, no matter how hard they’re shoved), and makes the song all-but-impossible to whistle or hum along.

But that’s not to say they’re absolved of their failings as vocalists, as they’re almost wheezing to keep up in places, to the point they sound taken by surprise at the pace and energy of the backing track. Most damningly, they sound neither sufficiently heartbroken to command sympathy, nor sufficiently tough to be making these kinds of veiled threats with disturbing undertones. It’s an epic misjudgement, and it renders the song profoundly unlikeable: the sound of some smug, preppy tool masking his humiliation, making himself feel big by belittling a woman.

Actually, what this is, I think, is the sound of Motown karaoke, the sound of grabbing some random bar-room singer and plonking him down in front of the Funk Brothers and recording the results. The blaring horn riffs, sax and trumpet trying to blaze right out of the speakers, and the belting drum track: those are excellent. They deserved to be used on a better record than this.