b/w It Moves Me

Two singles in, and already both Holland brothers have been featured; the roots of the Holland-Dozier-Holland hit-making machine were in place right from the very start.

Just nineteen and already a long-term project of Berry Gordy, with a major-label single under his belt (You b/w Little Miss Ruby on Mercury Records, produced by Gordy himself), Edward Holland Jr. was already well used to working with the boss, having provided demo vocals for many of the songs Gordy wrote for Jackie Wilson.

Charismatic, good-looking and possessed of a fine voice, Eddie had a promising career as a singer, releasing several singles with United Artists and Motown over the next four years, including a clutch of moderate-sized pop hits, but eventually a dislike for live performance (sometimes described as full-blown stage fright) meant he eventually moved behind the scenes with his brother and Lamont Dozier. I’ve often wondered if he was annoyed that it was Marv Johnson, and not him, who got to cut the first single for what became the Motown corporation; as it was, Eddie’s single came out three weeks after Marv’s, and thus Merry-Go-Round went down in history as the second Motown 7″, which counts for nothing. 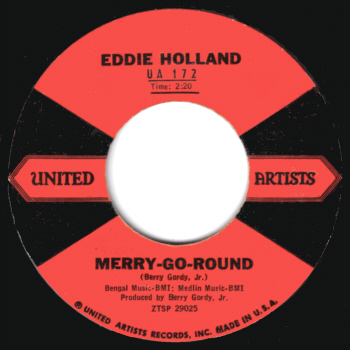 A shame, because this is probably a marginally stronger single than Marv Johnson’s Come To Me, though it was likely too much of a “slowie” for real record hop success. The similarity in Holland’s voice to that of Jackie Wilson is clear on this pretty (if rather short) bit of late-period doo-wop, which gives young Eddie the chance to show off his full range – and it’s an impressive range, too, even if it’s being put in the service of a fairly slight song. The lyrics are repetitious and mainly concern young Eddie bemoaning the fact that the girl he fancies is in love with someone else, who in turn isn’t interested in her but likes another girl, who it transpires has a thing for Eddie; our hero plaintively asks why things have to be so complicated. Verses two and three are almost exactly the same, and then it ends. Not one of Gordy’s classic songs, then, but it has a nice enough tune, and the vocal performance is excellent and more than enough to carry it through.

Merry-Go-Round did nothing commercially, though the liner notes to The Complete Motown Singles, Volume 1 note that Marv Johnson later covered the song on United Artists and got himself a hit. Like Johnson, Eddie Holland had his contract bought out by UA too, who were clearly in the market for their own Jackie Wilson, and saw the launch of Tamla Records as a good opportunity to sign up not one but two young vocalists from Wilson’s songwriter’s new stable.

However, that’s where Marv and Eddie’s stories diverge. Both men arrived at United Artists full of hope, but while Johnson racked up a string of hits for United Artists, Holland – rather fortuitously for the future of popular music – wasn’t nearly as successful, and having been dropped from UA he was re-signed to Motown just over two years later. We’ll be hearing from him again soon enough, but for now this is a pretty little calling card.