B-side of Shake And Fingerpop

B-side of Shake And Fingerpop

Or Leo’s Back, as one hapless label misprint has it. But no, it’s definitely “Cleo” – this is a follow-up, a sequel to a record we haven’t heard yet here on Motown Junkies.

It’s a slinky, loose-limbed shambles of an instrumental jam – the only human voice is a guy in the background, possibly Junior Walker himself, shouting interjections (“Cleo’s back!… Cleo’s gone!”) between verses – and it’s a definite change of pace and style from the rollicking A-side Shake And Fingerpop. Cleo’s Back is a new recording, laid down during the sessions for Junior’s Shotgun LP, an LP that would eventually yield no fewer than ten Motown A- and B-sides, but it’s a spiritual successor to Cleo’s Mood, a single Junior and his All Stars had cut for Harvey Records all the way back in in 1962 (and which Motown, who’d acquired the rights to the Harvey catalogue when they bought out the smaller label, the same deal that had brought Junior to Hitsville in the first place, had included on the Shotgun album, and would shortly be reissuing on 45.)

Well, I say it’s a “spiritual successor”; in fact it’s more of a not-very-radical re-recording, a glorified cover version, replacing some of the eerie, piercing organ that electrified Cleo’s Mood with some choppy guitars, but otherwise sounding less like a new song and more like a band revisiting something old from their repertoire, perhaps buoyed by the extra confidence born of three more years’ experience and hindsight.

Of course, Motown fans hadn’t actually heard Cleo’s Mood yet when this was recorded, and furthermore Cleo’s Mood had been a tight and professional recording in the first place (all the better for a groovy modern reworking), and further-furthermore the All Stars were never exactly in step with the rest of the pop charts anyway. (Although it’s interesting to note that however much of a lone figure Junior Walker cut in terms of fitting in with his younger, more commercially-polished Motown labelmates, he always had his finger on the pulse, dropping in several lyrical references to currently-hip trends).

With all of that in mind, the (admirably honestly-titled) retread works in its own right as well as as a supplement. Is it as good as the first instalment? Not really, but it’s a close thing, in more ways than one.

If it’s difficult to separate the two Cleos as a pair of brothers – twins, even – as they’re less two halves of the same whole and more two slightly different takes on the same idea, it’s also difficult to pin down exactly which is the brand-new recording (a contemporary of Shake And Fingerpop) and which is the three-year-old cut. Leaving aside Cleo’s Mood for a moment, the overriding experience for me when I cued up Cleo’s Back was a flashback alright, but a flashback which momentarily took me even further into the depths of Motown history, all the way back to 1959, and to the Swinging Tigers and Snake Walk.

Positively prehistoric, as reference points go, but both records share the same kind of… I don’t know what phrase I’m looking for here. “Awesome slackness”, possibly? Except that that sounds like a criticism, when I mean it as a compliment. Put it this way: both are the sound of some obviously very proficient, obviously very dedicated jazz and blues musicians getting rip-snortingly drunk, and then downing eight or nine cups of coffee to clear their heads, and then stumbling back on stage –

– and pulling it together, knocking out something with the brilliant, woozy ambience that comes from mixing a late-Fifties garage rocker with a slinky late-night soul jam. A lot of colouring outside the lines, but that’s what makes instrumental jams great anyway: the allure of pointillism rather than paint-by-numbers. 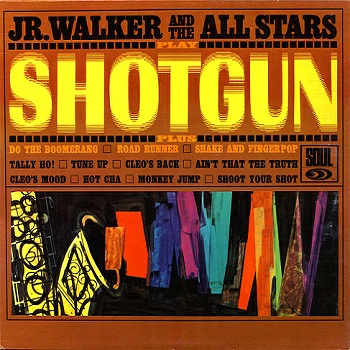 But all of that leaves aside the fact that there’s a tighter, cooler, slinkier version of the exact same song in existence; in fact, not only in existence, but on the same album (right), which can’t help but show this up, because even if you called them Cleo’s Suite Part I and Cleo’s Suite Part 2, it’s the other one that’s my favourite.

Both Cleos are very much records which highlight the All Stars as a group, rather than Junior himself as a sax virtuoso – not for the first time on an All Stars cut, the horn solos are a garnish rather than the driving force of the record, here perhaps reflective of the fact that Junior didn’t cop a writing credit for this one: Cleo’s Back was penned by the All Stars’ guitarist Willie Woods. (This makes me happy, because of my well-documented saxophobia (which still means someone striking up a sax solo causes the odd involuntary flinch), though obviously I don’t (and can’t) speak for everyone.) Essentially, the main differences between the two are that this one is a bit looser, a bit more easy-going, but that it’s also missing the riveting alto organ squalls that defined Cleo’s Mood.

Don’t get me wrong, this one’s still undeniably cool – I almost feel a compelling need to listen to it while wearing shades and cracking open a cold beer, and the punters liked it too, Junior scoring a double-sided chart hit thanks to this one’s popularity on black radio – but if you put a gun to my head and said I had to choose one Cleo, and only one, it wouldn’t be this one. Luckily, nobody’s ever going to force you to make that choice.