B-side of Love Me 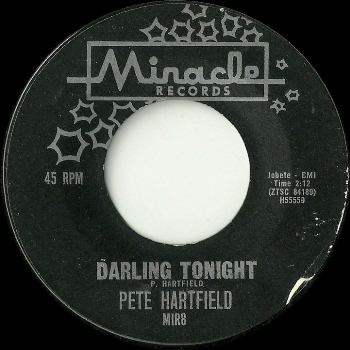 Both sides of Pete Hartfield’s one and only Motown single were written by the singer, and they both sound uncannily similar to one another; both are midtempo doo-wop ballads with the merest hint of blues, sung quite beautifully by Hartfield (who was clearly a gifted lead vocalist) but failing to really go anywhere, sticking to their rigid 50s progression chords throughout and never threatening to break free of their predictable, heard-it-all-before “plain vanilla” song structure.

This one makes more use of backing vocals than Love Me, to create a lusher atmosphere; the liner notes to The Complete Motown Singles: Volume 1 point out that it’s been postulated (though sadly without any proof) that the backing singers here are actually the Supremes, which would be interesting.

The use of any backing singers is a refreshing development, after the first few singles on the Miracle Records imprint had eschewed such embellishments – but the record is still entirely forgettable, and Hartfield’s strong vocal delivery isn’t enough to lift the song out of the realms of the merely “quite pretty”.

Lyrically it’s rather dull, too; the narrator spends the whole song telling his girlfriend how much he loves her and how much he’s going to prove it later tonight, but when pressed his ambitions apparently go no further than hugging and kissing.

Such coyness is fitting for a song like this, which could have gone for real fireworks but settles for the safe, dependable, unexciting option almost every single time. A disappointment.