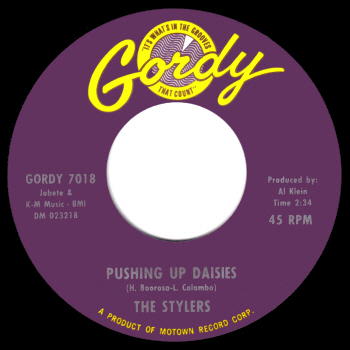 More badly-outdated fluff from the Stylers, Motown’s wettest bunch of middle-aged white doo-woppers, and it’s still awful – but unlike the twee platitudes of the cringeworthy A-side Going Steady Anniversary, this is almost endearingly (if not exactly entertainingly) silly. Only almost, though; the knowledge that they were trying to be deeply serious rather than hilariously melodramatic keeps spoiling any fun to be had from this pompous, overblown tract.

Proving the Stylers still had their finger right on the pulse of the pop music zeitgeist, this is apparently a cleaned-up, smoothed-out take on Nervous Norvus’ 1956 novelty Transfusion. It’s a finger-wagging sermon against dangerous driving, delivered by a dead narrator following a fatal car accident, complete with another knuckle-bitingly terrible spoken-word bit (our deceased hero is played by the same guy who did the similarly terrible spoken-word bit on the A-side; ironically, considering he’s meant to have passed on, he actually sounds more alive here).

In a rare moment of competence, the central vocal riff in the chorus (Well, I’m pushing up daisies (Pushing up daisies!) / Yes I’m pushing up daisies (Pushing up daisies!) / I’ve got a gal, she’s a-waitin’ for me / But the man at the gate won’t set me free…), the first and only time on these two sides that the Stylers show any propensity for harmony or timing, comes as quite a shock, a pleasant surprise that stops this getting another one out of ten. Though the Styler who plays the role of the devil (yes, you read that right) is so hammy as to almost exhaust that goodwill (“Go a little faster! Go a little faster!” he encourages our reckless hero, in order to harvest his soul from the ensuing carnage. Cheerful stuff, eh?)

Otherwise, there’s not much to report; Al Klein, who was busy turning Mel-o-dy Records into a tenth-rate country and western label and who produced both sides of this travesty, dubs in a load of squealing tyre noises to add to the atmosphere (shades of R. Dean Taylor – another white Motown act – on Gotta See Jane later in the decade), but it’s inescapable that this is destined to be a piece of short-lived novelty nonsense and not a useful parable about the importance of road safety, never mind a half-decent pop song.

Manifestly silly, despite the macabre subject matter, this is still very much below Motown Quality Control’s usual threshold, and it’s a mystery how it managed to find its way into actual record shops. The Stylers weren’t invited back for a follow-up; this was their one and only Motown release. On the strength of this, I can’t say I’m too upset.