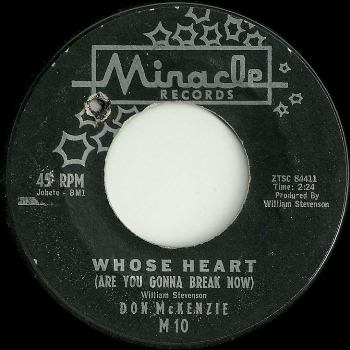 The end of the line for Miracle Records, which went out with its tail between its legs, releasing one final dispiriting flop. The label’s closing tally stood at 12 single releases and precisely one hit – the Valadiers’ Greetings (This Is Uncle Sam), a No.89 pop smash.

Miracle didn’t go out on much of an artistic high, that’s for sure. Don McKenzie is an obscure figure, who (according to the liner notes to The Complete Motown Singles: Volume 1) came to Motown having apparently cut a 7″ for Ridge Records (the label who also had some unspecified connection to both Berry Gordy Jr (sometimes described as its owner, other times as an investor) and to Nick & the Jaguars, the first white group to release a record on a Motown label).

That Ridge single (Beauty b/w Hava Nagila) apparently isn’t available for listening anywhere, but Youtube provides a different Don McKenzie record, Heart Breaking Lover on Circus, which is obviously sung – quite badly – by the same guy. The writing credit on that song, “D. Myers”, matches the credit listed on the peerless Don’t Forget The Motor City discography for “Beauty”. Perhaps “D Myers” was Don McKenzie? If anyone can help further identifying who these people were, please leave a comment!

Anyway. The record. It’s not fantastic. Mickey Stevenson’s reputation as a first-rank Motown songwriter was continuing to grow (though Mary Wells’ majestic Strange Love had been an unexpected chart flop, he’d been responsible for many fine and successful records already), but this has to go down as one of his weaker efforts.

A light bit of mainstream turn-of-the-decade pop fluff aimed squarely at white radio, it’s an uptempo number which tries to come over as energetic and youthful, but simply ends up sounding tired. Apparently trying to pick up a bit of the R&B flavour of Eddie Holland’s recent hit Jamie, another Stevenson co-write, it falls badly flat; its tune is wholly forgettable, and unlike Holland’s hit, its singer is deeply uncharismatic.

Because Don McKenzie was never going to be a star, not on this evidence. McKenzie’s voice, a high, reedy tenor, is weak, and his delivery unfortunately bland; the resulting record sounds dated and uninspiring, tailor-made for white radio at the end of the Fifties, and it just doesn’t pass muster here. Certainly the comparison drawn in the liner notes to Gene Pitney is one that considerably flatters McKenzie; they’re scarcely in the same league. He definitely doesn’t lack commitment, and gives it his all – but sadly it’s just not enough.

The backing isn’t entirely impressive either. Layers of strings attempt to add a touch of class to proceedings, but fail to elevate the record beyond the utterly commonplace. It’s as though McKenzie’s lack of oomph somehow transmitted itself to the band; the whole thing is underpowered, a would-be dance record that never once makes you want to get up and dance.

As with both sides of Bob Kayli’s then-current Tamla single, Small Sad Sam and Tie Me Tight, the young Supremes – in the absence of any hit records of their own – are drafted in to supply backing vocals. They don’t do a particularly good job, shrill and distracting, but it’s at least enough to call to mind the likes of the Shirelles and the Chiffons, and wonder whether this song might have been better suited to a girl group in the first place.

If the anachronistic bobby soxers that this record seems to have been aimed at were still out there buying records in 1961, they didn’t fall for it; the record stiffed on release, concluding the brief and unsuccessful history of Miracle Records in fitting style.

This was Don McKenzie’s one and only single for any Motown label, although he apparently recorded enough material for an album before leaving the company. Needless to say, the LP remains in the vaults. When the new Gordy label was started up in 1962, effectively replacing the Miracle imprint, Motown neglected to invite McKenzie along for the ride. The music business seems to have lost track of him thereafter; he’s now as forgotten as the label he recorded for.