b/w A Fork In The Road

b/w A Fork In The Road

While there are Miracles records I like better than this one – not many, mind you, and not by much, but I thought I should get that out of the way right from the beginning – well, in any case, The Tracks Of My Tears probably shows off just what kind of a crazed genius Motown had in Smokey Robinson.

Smokey was on a tear in the spring of 1965, and (not coincidentally) the Miracles had never been in better shape; his production, his singing and his songwriting were at an all-time high. That latter point was reinforced by his level of understanding with his bandmates, each of whom brought something new to the table, ranging from expert palette-mixing right the way through to presenting Smokey with almost-completed songs waiting only for a final polish. The Tracks Of My Tears – why do so many people leave out the The in the title? – falls somewhere between those two poles, and it’s a great example of what separates the likes of Robinson from mere “good” songwriters, never mind schmucks like me and you.

Marv Tarplin’s beautiful guitar, early morning sunlight on the water, chimes into the track and everything bursts into life. The Miracles strike up a calypso riff – Doo doo doo doo, doo doo DOO doo… – and the drums kick in with a weird syncopated rhythm, almost microscopically off-beat (and doubtless that’s on purpose, of which more later), strangely magnetic in its half-hesitancy. And then…

Well, and then nothing, as far as Tarplin and Pete Moore had got with the germ of the song. The riff, conceived as a playful variation on Harry Belafonte’s The Banana Boat Song, had evolved into the seed of something good, something full of regret and heartache, as though there were tears of recrimination baked into its very chords – but that’s as far as it went. A great intro with nowhere to go. What do you do? You do the same thing every Motown act does sooner or later, and call in the world’s greatest musical proofreader. Enter Smokey Robinson.

A couple of years ago, Smokey played a sold-out set at the BBC Electric Proms here in Britain, the entire concert broadcast live on TV. He was on remarkable form, the audience eating out of the palm of his hand, so much so that he could afford to throw in two lengthy selections from his then-current Time Flies When You’re Having Fun LP, an album which 95% of the crowd manifestly hadn’t ever heard before, and still keep their attention. When he closed his set with The Tracks Of My Tears, the punters knew every word. Every word. And in the chorus, Smokey was able to do something I’ve only ever seen a couple of times in my life: he could stop singing altogether and let the crowd take over en masse. What’s more, the singing was loud, boisterous, communal; not only has this somehow become Smokey’s My Way or Angels, it showed the magic of what he’d achieved in writing it this way: it feels like such a tender, vulnerable song, I hadn’t noticed the chorus is a football chant.

When I say “magic”, I mean something new, something different. I’ve talked on numerous occasions about the “magic” of Motown, and in particular the effortless quality many great Motown records have; equally, it’s important to note many great Motown records don’t have it at all. This is one of the ones that sounds mortal, like it’s being pushed uphill rather than rolled downhill (probably the best analogy I can make). There are lots of great Motown records that share this one’s straining physical effort – Heat Wave is a superlative example – but Smokey does a unique thing here, turning a lack of airy glide to the record’s own advantage. 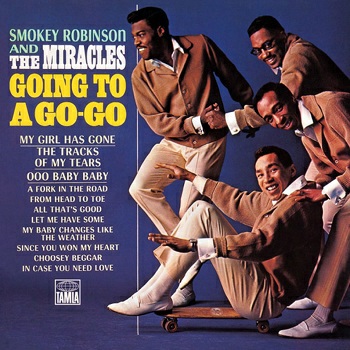 (Not that it’s a difficult slog of a song or anything – indeed, it’s one of those Motown singles where, when it’s not actually playing, I always remember it being softer and more mellow-sounding than it actually does, such that I was tempted to laud Aretha Franklin’s incredibly worthy version as more of a radical departure than it really is – but rather, that there’s a slightly forced quality to this, Smokey turning in something akin to the Temptations’ My Girl (a song he wrote, of course), only built with cinder blocks instead of feathers. Usually that would sound like a criticism, but here I never get the feeling it’s anything other than intentional; where Robinson’s It’s Growing was trying so, so hard to capture the beauty and grace of My Girl, groping its way in the dark and emerging in a slightly different place than expected, The Tracks Of My Tears is like this on purpose.)

The lyrics are full of struggle – internalised struggle, sure, and desperate for release, but struggle nonetheless, Smokey’s narrator stuck in a kind of hellish no man’s land (it’s never entirely clear whether this second-person screed is actually meant for the ears of his former beloved). The music, with its tiny pauses and its slightly leaden moments – and that chorus, designed to be bellowed by twelve thousand people – isn’t trying to be graceful and dainty, it’s reflecting the pain of its narrator. Accordingly, almost everything about this, save Marv and the Miracles themselves (whose backing vocals are as angelic as ever), is resolutely earthbound, exhilarating like a dragster rather than a rocket; heart in the clouds, feet of clay.

Does he blame her for the breakup (“since YOU left me…”)? Does he want her back (“You’re the permanent one… I need you, I need you!”), or is it just an exercise in massive, hysterical, grandstanding self-pity?

If it is meant to win her back, it’s a very oblique way of doing it; the song makes no reference to their blissful life before the breakup, not even obliquely like Since I Lost My Baby; there’s no happiness in here to contrast with his current all-consuming despair. (Even though, in common with Since I Lost My Baby, Robinson sneaks in a little chink of light for the listener: “…my hope is fading, he mourns. Fading, not dead.)

But this is the picture of a man who doesn’t know what went wrong or how to fix it, and not only is he afraid he’ll never be happy again, he’s been crying so hard his tears have left a literal mark on his face. And you’d see it, too, if you were looking hard enough, he chides her (and us). An amazing image.

The idea of a man on the edge putting on a brave face and pretending to be happy is, of course, ground which Smokey had mined before, and would go on to mine again to even greater heights, but there’s something about the way this is expressed that can’t help but strike a chord: it’s so over-the-top, it resonates, reverberates, sticks in the mind. Smokey isn’t just talking about wet tear-stains on his cheeks, he’s talking about his tears wearing actual grooves in his skin; obviously they haven’t really done that, but it’s a beautiful poetic image and one of the best high-concept lyrics Smokey ever coined.

Robinson, again, is on just spectacular form as a singer; he brings to this a kind of looseness, an intensely personal, likeable touch to what might have been a grandiose and self-aggrandising empty gesture, bombastic and uncalled for. Instead? Well, as we’ve seen, he’s able to get entire stadiums chanting along with him in an almost celebratory communal plea for a second chance, whilst never for one second making us doubt him.

It helps, I suppose, that the tune is insanely catchy; the sort of melody to be whistled and hummed in showers across the world, and (again like My Girl) it’s hard to pin down just which of the many, many hooks is the biggest game-changing moment, which bit we’ll be whistling and humming as we lather, rinse, repeat. Pete Townshend voted for the heavenly pause followed by Smokey’s pronunciation of the word “…substitute”, writing an entire song based on it; Billy Bragg (who calls this his all-time favourite song, and turned in his own stripped-down guitar cover by way of tribute) opts for the anthemic “Take a GOOD look…”; the editors of Rolling Stone, who declared this one of the fifty best songs ever written, picked up on its ability to leave audiences in tears while still managing a stadium rock hook like “OUTSIDE! I’m masquerading! INSIDE! My hope is fading!”. Me, I’m particularly partial to the staccato breakdown, as if everything in Smokey’s head just trips over itself in a bid for escape – My smile is my make-up I wear since my break-up with you!. You probably have a different pick of your own, and that just goes to show what a remarkable record this really is.

For the second time in a row, the Miracles are shafted out of a (10) simply because I’ve only got fifty to award, and I’d run out of them. But, again, if you were to say this one was your favourite Miracles single, favourite Motown single, even… I’d get it.