A belated follow-up to the Marvelettes’ magnificent début single Please Mr Postman, which had rocketed to the top of the charts since its release back in August, becoming Motown’s first pop number one.

The success of that first single had spawned a rush-job Marvelettes LP, also titled Please Mr Postman, of which more tomorrow; for today, suffice to say the album consists mainly of newly-arranged, hastily-recorded, Ondioline-heavy covers of previous singles by other Motown acts, and isn’t generally considered a masterpiece, even by die-hard Marvelettes fans.

Critical and commercial reaction to the album had been negative, punters quick to spot a cash-in job, which perhaps explains why no second single was lifted from the LP. Instead, one gets the strong feeling that Motown knew they were on to a good thing with these Marvelettes, but – as with previous Motown hitmakers the Miracles and Mary Wells before them – the label didn’t want to rush them into the post-hit marketplace without really strong material. If that meant having to wait a bit longer for a follow-up single, so be it.

Which was all well and good, except that somehow Twist mania had set in at Motown in the run-up to Christmas 1961, and a unique confluence of factors – insignificant in themselves – combined to change the master plan.

It had been a few months since the Marvelettes’ big hit had been released, but the charts moved slowly in those days; although its success had been easy to track by the standards of the time, Please Mr Postman was only hitting the top of the Hot 100 now, at the end of the year, resulting in an unexpected PR coup as Motown now boasted the No.1 group in the country – but with no new product to sell on the back of it, bar an underwhelming album which had picked up bad reviews, and was sitting resolutely untouched in the racks of the nation’s record stores. Simultaneously, the Twist craze breaking out across America – which had already pushed Berry Gordy into rush-releasing an entire album of Twist material credited to a made-up group called the Twistin’ Kings – had picked up on the Marvelettes’ first single as something that could be enthusiastically Twisted to, the rhythms of its unusual, syncopated beat lending themselves well to the dance of the moment. Finally, the Twistin’ Kings record had attracted almost no interest, meaning Gordy was about to miss out on what he saw as easy money. 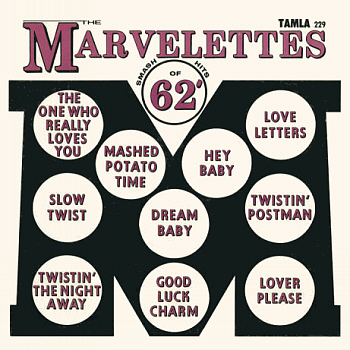 The end result of all these factors coming together was this baffling follow-up, an oddity in the Marvelettes’ canon. The only original song featured on their cheap and cheerful second album, Smash Hits of 1962, left (a grab-bag of mostly non-Jobete cover versions later retitled The Marveletts (sic) Sing, which gives you some idea of where the LP featured in Motown’s list of priorities), and wholly out of step with the rest of the group’s singles, Twistin’ Postman is a direct lyrical sequel to their magnificent début. It’s frothy and light and fun; it’s also totally inane, and an unworthy successor.

Good and bad abound here. Let’s start with the good. Despite the fact it’s often described as a soundalike sequel, a trick which Motown would come to specialise in over the next 10 years, Twistin’ Postman sounds nothing at all like Please Mr Postman. Gladys Horton again takes the lead, as she had done on the previous record, and the rest of the Marvelettes again provide shrill, shaky backing vocals, as they had done on the previous record – but other than that, the musical similarities are few and far between.

Instead, this is a full-on Twist workout, far more conventional in structure than their début but also much more direct and punchy. The whole thing is designed to get the kids Twisting for all they’re worth; if the band’s performance is less interesting than on Please Mr Postman, it’s also tougher and more muscular, the driving drum/piano beat and athletic bass work powering things along handsomely, and Gladys Horton on excellent form on lead.

Indeed, Gladys is one of two reasons to listen to this record, now that the Twist heyday is fifty years behind us in the rear view mirror. Starting the record with a near-acapella solo, accompanied only by a chiming piano, she sells it straight away – Sitting by the windo-o-o-ow / All because I haven’t heard from you… – before the band kicks in at full pelt, and Gladys kicks up a gear with it: And then my mama said look! Look!. She’s an excellent pop singer and a proper frontwoman, sassy and controlling, leading proceedings with aplomb. She even gives an appealing, apparently ad-libbed falsetto squeal of “Hey!” at 0:55 which wins over anyone in the audience who wasn’t yet convinced.

The other reason to listen is the fact that this is actually Motown’s first proper uptempo girl group stomper. The Supremes’ execrable Buttered Popcorn had had a (failed) stab at this kind of territory, but this is the real deal. The song shows the early touch of each of its writers (though Mickey Stevenson was inexplicably credited on the label as “Stevens”); it’s not as plain and straightforward as it first appears, again making use of what must count as the Marvelettes’ most distinct unique point of interest among the various Motown groups – clever interplay between the lead vocal line and the backing vocals. It’s really no less intricate here than it had been on Please Mr Postman, with the lead and backing swapping places or singing wholly different lines in nascent multi-part harmonies, and most noticeably with the lead not even singing the title of the song, Gladys instead finishing each chorus with ‘Cos he’s a… and leaving the backing singers to finish off, Miracles-style. There’s also an endearingly unpolished instrumental break at 1:12, with drums, guitars and piano all hammering away with abandon in a thoroughly modern fashion, calling to mind the early work of those noted Marvelettes fans the Beatles. The break comes complete with a really great handclaps-and-drums bit straight after it (over which Gladys delivers a neat series of spoken-word asides – uh-huh, he’s a Twistin’ postman. Look at him go. Twistin’, twistin’.), and it’s never less than thoroughly danceable.

So, that’s the good. Now for the bad. Lyrically, it’s awful. A weird running joke about a postman who does the Twist while he’s on his rounds (the cover art, left, shows him scattering letters out of the mail sack as it flies around him), tacked on to a continuation of the Please Mr Postman story about the narrator waiting desperately for a letter from her boyfriend. I wish they hadn’t done that; it’s not just that it’s meaningless pap (which it is, obviously), but also that it comes close to derailing the endless, eternal yearning of its predecessor, as (1) Gladys’ narrator gets her letter during the course of the song, but doesn’t say anything about it, preferring instead to concentrate on the titular dancing postman, and (2) she also reveals that if she hadn’t had the letter, she was about to dump her boyfriend for being such a jerk. Which is a fine enough sentiment, but wholly at odds with the character we met in Please Mr Postman, who literally begged the mailman to look again and make sure he hadn’t missed anything; that narrator never mentioned anything about it being her bloke’s last chance, or indeed being angry with him at all – so, crudely tacked on like this, either it doesn’t fit, or it takes some of the gloss off one of the all-time great pop songs. I’m plumping for the former.

It also feels very thin and slight compared to Please Mr Postman, however good some of the arrangement tricks are, and the backing vocals are again awful – grating and screechy, and also indistinct, rendering the title as Twisti-i-i-i-i-i-i-n’… POSTn.

In the final reckoning, it’s what used to be called a “grower”. Your first reaction might be that this is unbelievably disappointing garbage (mine certainly was), but repeated listens upgrade its status to somewhat better than that: happy, fun, toe-tapping, an enjoyable enough bit of well-built, meaningless froth.

Ultimately, it’s not terrible, but the Marvelettes had come down from a whole different level to get here.