b/w You’ve Really Got A Hold On Me

B-side of You’ve Really Got A Hold On Me

(Released in the UK under license through Oriole Records, who flipped the two sides)

For all its brilliance, the musical career of Smokey Robinson doesn’t ever seem to have gone quite according to plan. Throughout Smokey’s story, there are expected hits which turned out to be relative flops, little-regarded throwaway tracks which turned out to be hits, new albums introduced with much fanfare by their lowest-charting singles.

Case in point: Broken Hearted, chosen as the lead single for Cookin’ With The Miracles back in June 1961, had unexpectedly bombed, leaving it for DJs to flip the record over and propel the B-side, Mighty Good Lovin’, up the charts, turning the single into a double A-side.

Not for the first time, then, did a brand-new Miracles single arrive upside-down – but the contrast was never as starkly illustrated as with this record.

Happy Landing was the first new material released from the group’s upcoming fourth LP The Fabulous Miracles, recording for which had all but finished the previous month. Following the strange diversions and show tunes on the third Miracles album, I’ll Try Something New, the big buzz ahead of the release of The Fabulous Miracles was that for the first time, Smokey Robinson would write or co-write every song on the new LP. (He contributed eight new numbers, the album being bulked up with two older tracks). This was a bigger deal than it sounds today; if the LP is less cohesive and well-rounded than later sets recorded after the advent of the “artist album”, it should be remembered that the notion of an entire album filled with songs by one writer was still an outlandish novelty in the winter of 1962, and quite a testament to Smokey’s burgeoning reputation. The first single released from the album would indeed feature one of Smokey’s most enduring, classic songs – but not on the A-side.

Popular history has more or less forgotten that You’ve Really Got A Hold On Me started out life as a B-side. If you want a really obscure bit of Motown trivia, though, try asking what the original A-side was. The answer, obviously, is Happy Landing, the forgotten Miracles single, even among Miracles fans.

Hindsight is 20/20, and the correct choice seems blindingly obvious in retrospect, so much so that it can be difficult to work out just what Motown was thinking releasing the single this way up. The truth is that as well as Happy Landing being a good, solid record in its own right – and it is, there’s plenty on offer here – the decision to issue it as a single was a perfectly sound one, rather than some sort of legendary cock-up. 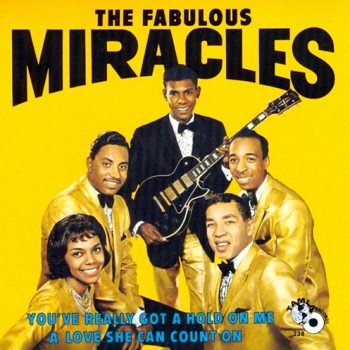 It all goes back to the great Sam Cooke. Whether or not it was intentional, Cooke’s influence is writ large over most of the new songs on The Fabulous Miracles; in the case of Happy Landing, the most obvious touchstone is Having A Party, which shares a very similar tempo, chord progression and guitar riff gimmick with this single. (Ironically, I’ve always thought that Having A Party in turn owed a small debt to the middle eight of the Miracles’ Broken Hearted, so this is really bringing things full circle).

Anyway, Cooke’s record was both a cracking song and a Top 20 hit, and Smokey’s outwardly similar song – it’s no pale imitation, being faster, tougher, more masculine than the original, and blessed with a bevy of horns and a rollicking Hammond organ part – would naturally have seemed like a good bet to score similar success. That it came coupled with one of the all-time great Motown ballads is just unfortunate, because this is a fun little single in its own right.

It all kicks off with a truly great intro, among the best Motown intros to date, organ, drums and handclaps setting the mood straight away. The song’s verse structure is actually not too different from its famous B-side, featuring Marv Tarplin doing a very similar guitar riff over the top of every second line, but it’s a neat trick that works on both records in two entirely different tempos. This one is taken as a full-throttle attack, the Miracles’ most raucous, straight-ahead rocking single since the aforementioned Mighty Good Lovin’. Meanwhile, Smokey’s having such a great time out of his mellifluous falsetto comfort zone, screaming his throat raw, and the groove laid down by the band and the handclaps is so infectious, and the rest of the Miracles, led by Claudette, singing Have a happy landing! are so entertaining… The whole thing is just a fine single.

Perhaps that was its problem; it’s just a fine single, and never a masterpiece. It’s basic, even simplistic, in its almost circular structure; the lyrics are completely anonymous, the tune unlikely to stick in anyone’s head. Plenty of fun, but a transient, temporary kind of fun, it’s better when it’s actually playing than afterwards; gleeful and accomplished but also slight and ephemeral, the sort of thing very much deserving of a place in the Top 20, but never a candidate to be Number One for six months.

In the event, it didn’t manage either of those things. Perhaps it was just starved of light in the shadow cast by its flipside. Whatever the reason, Happy Landing failed to chart entirely – even if, as seems likely, the performance was distorted by the meteoric rise of the B-side, this one still went into the books as the first Miracles single to miss the charts in over two years, and also the first time that had happened since their big breakthrough with Shop Around. A pity, as while you’d have to be mad to pick this as one of the Miracles’ best records, this is still a lot of fun, and it really deserved a better fate.

Leave a Reply to The Nixon Administration Cancel reply