B-side of Darling, I Hum Our Song 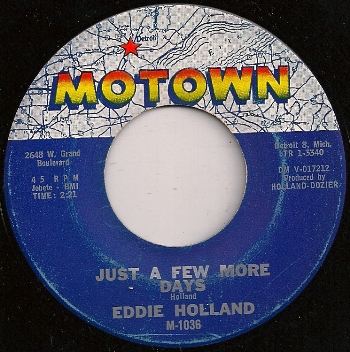 If the A-side of Eddie Holland’s sixth Motown single, the ballad Darling, I Hum Our Song, had been a slightly risky choice, this B-side sees Eddie back in more familiar territory: thin and conventional, but highly engaging, extremely likeable Jackie Wilson-esque midtempo dance pop.

Produced by Brian Holland and Lamont Dozier, but written by Eddie alone, without their input – the first such solo Motown writing credit for the older Holland – this is a fun, loose workout, and both Eddie and the band seem to be enjoying themselves with it. There are two really good bits – the plaintive intro, which features different chords (more interesting chords) to the rest of the record, and a raw sax solo at the one minute mark that gets intriguingly mixed in for an instrumental break as Eddie gets faded down. Like the A-side, the horns and drums drive this along, and if they don’t do anything terribly inventive, they keep the groove going extremely well.

It’s no masterpiece or anything – it’s very thin, there’s no chorus to speak of, and the lyrics are pretty forgettable (though the concept, Eddie lacking the courage to break up with a no-good girlfriend but telling himself he needs Just A Few More Days to get it together, is an interesting one) – but it’s good fun all the same, and combined with the A-side, this adds up to just about the best pair of sides Eddie Holland had turned in to date.