b/w A Tear For The Girl

b/w A Tear For The Girl 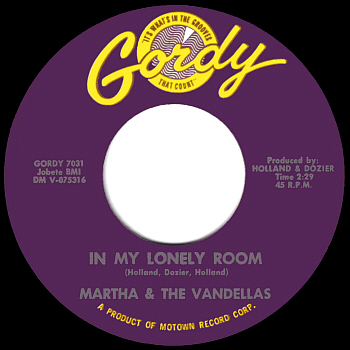 Martha and the Vandellas began 1964 at something of a crossroads. Having broken through to the big time in 1963 after being paired with the Holland-Dozier-Holland songwriting team, cutting two of Motown’s best-ever singles, Come And Get These Memories and Heat Wave, they’d attempted to follow the latter’s success with two loose variations on the same theme, Quicksand and Live Wire, with diminishing returns both commercially and critically. Now, the way forward was unclear.

The group’s line-up, never particularly solid at the best of times, was also looking shakier; at the time of this single’s release, founding member Annette Beard was pregnant, and would end up leaving the Vandellas by July. (Contrary to most published sources, she was still very much in the group at the time this was cut – as confirmed by the lady herself! – but things were definitely beginning to unravel.) Against this backdrop of uncertainty, the Vandellas convened to record their new single in January ’64, just as Live Wire appeared in stores.

This was the Vandellas’ third single in the space of four months, and in many ways, it’s a similar situation (if not a similar song) to Mary Wells’ What Love Has Joined Together, an attempt to break out of a run of “soundalike sequels” by making small but significant changes to the formula, still recognisably a sequel but hopefully fresh enough to stand on its own merits. It was met with a similar lack of commercial interest on the pop charts (again failing to make the Top 40), although it did go Top Ten on the Cash Box R&B list. Still, whatever the answer was to the problem of where Martha and the Vandellas would go next, In My Lonely Room didn’t seem to be it.

It’s a shame, because (as we’ll end up seeing time and again as Motown’s mid-Sixties Golden Age comes into its own) this is a fine pop record in its own right, only really diminished by its obvious similarities to what had come before. Every Vandellas single since Heat Wave had followed the same basic template while derivating a little more from the pre-stamped mould, and perhaps if In My Lonely Room had followed straight on from Heat Wave without the two records in the interval, it would get more respect. As it stands, this is an incremental advance, evolution rather than revolution, and as such it seems to have been overlooked by history. Quite unfairly, as it turns out, as – just as with every single Martha and the Vandellas had released to date – this is great fun, and has plenty going for it.

Let’s start at the start. Vandellas intros are always worth listening to, and this is another cracker; a high-tuned guitar, almost ukelele-like, strummed over a chiming bed of vibes for a few bars before the horns kick in; then, after a few more bars, the girls arrive at the same time as some handclaps and what feels like a rise in volume as well as a speeding-up in momentum.

It’s a really interesting development, musically, for both the Vandellas and the Holland-Dozier-Holland team; this one has much more of a clearly defined conventional verse/chorus structure compared to the pure hook lines of the last few Vandellas singles crafted by the trio, disguised in large part because it’s dressed up very much like its predecessors. It’s also a harbinger of things to come from the HDH camp, a bouncy, almost jovial tune covering up some really emotionally devastating lyrics; a process begun with Come And Get These Memories and ending with a run of Number One hits for the Supremes, but definitely underway here. Between the glistening vibes, rousing middle eight sax break and gorgeous backing vocals doing both sassy and delicate, it’s easy enough to miss – even with the excellent title – that this is a song of pure and direct loneliness.

I’ll come to Martha in a moment, but let’s have some applause for the Vandellas as a whole. More than one source states that Roz and Annette aren’t on this at all, that it’s really the Andantes covering up for the Vandellas; I don’t think that’s the case, listening to it, and I’m certain someone will be along to clear this up definitively soon! Certainly, the group singers are given more to do here than on any Vandellas record since Come And Get These Memories, floating effortlessly between carrying the main line and indulging in some great call-and-response stuff – and they sound great. It might come across as flippant on my part to praise the quality of their Ooooooohs, but overlook the brilliant backing vocals at your peril; they’re one of the best things about this record.

Time to be controversial now. I don’t think Martha is as good here as on the previous Vandellas singles we’ve covered. Perhaps it’s because I’ve listened to this so much on The Complete Motown Singles: Volume 4, where it has the misfortune to come straight after both My Guy and Oh Little Boy, both acting masterclasses, but I’ve always got the feeling that there’s something being held back here, something not quite on the raw edge that’s in all my favourite Martha records. It’s surprising, then, to learn that the lyrics actually had Martha in tears in the studio; perhaps it was just too raw to come across on vinyl, or perhaps it struck a nerve because there wasn’t actually any acting needed, causing her to withdraw a bit. Or maybe I’m just nitpicking. It’s certainly a strong, forceful lead vocal, showing that Martha was still able to do things no other Motown singers could do, so perhaps it’s best to just ignore my criticism and listen to the words.

The evocation of loneliness in the lyrics is a draw in itself, with Martha playing the part of a woman who puts on a brave face and doesn’t let the world see she’s hanging by a thread (witness lines like I just lock my door / And let myself go / Then I lay right down and cry, a real punch in the gut given the strident power in her voice). But it’s also interesting to compare the central concept with Smokey Robinson’s later lyrics like The Tracks Of My Tears and The Tears Of A Clown which follow the same idea; it’s every bit as heart-wrenching here as it is there (and Smokey would have been proud to have written a line like I push my pride aside, which is treated as an almost ad-libbed interjection), only the angst is played against the music in true HDH style.

I’m not really surprised that this wasn’t the big hit to revive the Vandellas’ commercial fortunes – it’s just not that kind of a song, greatly enjoyable though it is – but that doesn’t mean it’s not both a fascinating listen and a super dancer. Another really difficult one to mark, too; giving things grades is usually a lot of fun, but there are occasions when it just seems impossible to settle on something and strike the right tone. In the end, I flipped a coin to decide between two numbers; I’ll let you decide whether tails was higher or lower.