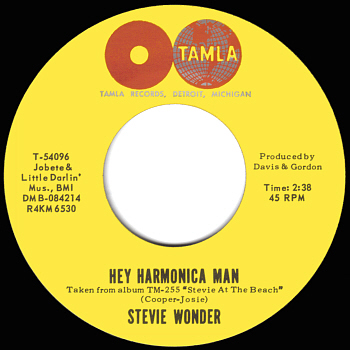 Stevland Morris Judkins was 14 now, and the last single Motown had released under the name “Little Stevie Wonder” – the rather pretty Castles In The Sand – had been an attempt to move him away from the kiddie novelty trappings of his raw earlier work, and towards a more mature, contemplative sound. Strange, then, that once Motown pushed ahead with that process by getting rid of the “Little” prefix, the first thing they did was to release another throwaway track from the Stevie At The Beach LP, one which – the word “Man” in the title notwithstanding – is as juvenile a novelty as anything he’d put out in the last two years.In later years, Stevie has poured scorn on his pre-’65 Motown output; whenever he’s asked about these records, he seems to lump them all together as a collection of juvenilia. Perhaps surprisingly, it’s Hey Harmonica Man for which he reserves particular criticism, describing it on more than one occasion as “embarrassing”.

That’s not really fair, but I can see his point: at a crucial, sensitive time in his life, coming off the back of an unexpected Number One hit record in Fingertips and searching for both credibility and direction, having finally thrown off half of the marketing department’s condescending nickname, he’s suddenly saddled with something which paints him right back into that same corner he’d been trying to climb out of. It’s not that Motown were treating him as some sort of freak show, but it’s not too far off either; it’s somewhat galling to observe that, two years down the line from Stevie’s Motown début 45 I Call It Pretty Music But The Old People Call It The Blues, the label’s basic strategy hadn’t changed: look at this blind kid! He can sing *and* play the harmonica! Often quite well! Have we mentioned he’s only fourteen? Gather round, everyone, and have a good gawp.

The more of these early Stevie sides I listen to, the more Fingertips feels like an anomaly, a burst of freeform creativity amidst the rigidly-controlled confines of most of his other efforts to date. Hey Harmonica Man sounds like Fingertips as rewritten by someone whose favourite Stevie Wonder record was actually his long-forgotten duet with Clarence Paul, Little Water Boy. Accordingly, it features long call-and-response vocal sections (most of the vocals are done by the backing singers, cast here in the role of an adoring crowd, rather than by Stevie himself), of which more later, interspersed with lengthy and frequent bursts of harmonica – but the latter are stuck in some weird halfway house, the spontaneity and uncontrollable joy of Fingertips replaced by a more carefully-managed, self-conscious sound, presaging Stevie’s later mature work, but a sound that doesn’t jibe with the rest of the shambolic, self-consciously rambunctious track.

A West Coast production like the rest of the Stevie At The Beach LP, this is a record that wants to have its cake and eat it, tugging the heartstrings of the punters drawn in by the novelty value (played up by the sleeve, above left) while also getting the Fingertips crowd’s vote by providing good dance material.

It worked relatively well, if not artistically then at least commercially (the single hit the R&B Top Five and the pop Top 30, by far Stevie’s biggest hit since Fingertips, helping him continue to earn his keep while his labelmates started to hit the charts with increasing regularity), but it’s not a record to linger in the mind. The lyric is a bit of self-mythologising, ostensibly building Stevie up by having him wow a rubbernecking surf party crowd (played here by some nasal-sounding Los Angeles backing vocalists), but actually playing to the exact same stereotypes he’d pandered to on his début:

The overall impression isn’t helped by Stevie giving a strained, wavering vocal performance that suggests his voice was in the process of breaking (check out the piercing squeak and subsequent growl at 2:04) that – ironically – actually makes him sound even younger than on his previous records.

It’s not awful – the harmonica parts, the best thing here by an absolute mile, are excellent, even if they sound like they belong to a totally different record (and that in itself is pretty bad, given the rest of the record is really just a series of extended, skit-like setups for Stevie to do yet another harmonica solo, but anyway) – but it is a difficult listen. In spite of some great work on the mouth-organ, there’s an argument to say it’s as embarrassing as Stevie makes out; it’s just that it’s not Stevie who should feel bad about this, but rather the label that was forcing him to jump through this particular set of hoops.