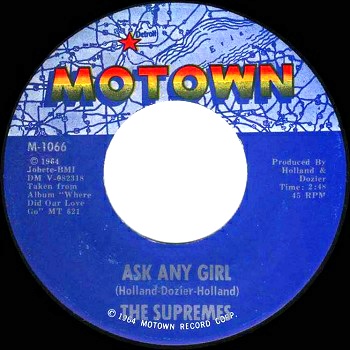 Further evidence of just how confusing it must have been to be around Hitsville in the autumn of 1964. The Supremes had toiled in relative obscurity for three years as the runts of the Motown litter before becoming, almost overnight, the hottest ticket in town.

The girls’ second LP, Where Did Our Love Go, captures the group right in the middle of this transition. Most of the album was recorded after they got assigned to the crack Holland-Dozier-Holland team, but before they hit it big, and so it’s replete with leftfield ideas and a kind of try-anything spirit, honing skills and juggling identities in the chase for that breakthrough.

Ask Any Girl, the dramatic closing track of the album, is a great example of this. In contrast to the precise pop perfection of the A-side, Baby Love, here we get something like a mix of operetta overture and demented bossa nova flamenco. It’s both completely representative of the “new” Supremes sound, and at the same time a relic of a time being left behind.

It feels strange to be dissecting this as a standalone 45 side, rather than the string-laden finale and coda for the Where Did Our Love Go album. It was actually re-used, for some reason, as the opener for the Supremes’ next “proper” LP, More Hits By The Supremes, neatly underlining how it forms a bridge between two eras. On Where Did Our Love Go, it closes out a side full of slow and midtempo numbers, all solid enough but slightly alien in feel, most of which we’ve already met here on Motown Junkies – I’m Giving You Your Freedom, A Breath Taking Guy, He Means The World To Me, Standing On The Crossroads Of Love. On More Hits By The Supremes, Ask Any Girl goes straight into the driving physical thump and clatter of track two, Nothing But Heartaches. It doesn’t feel out of place in either context, which I suppose illustrates the transitional nature of the song.

This is just about teetering on the edge of greatness. It’s roughly two thirds killer, one third ungainly plod, but it’s impossible to separate the good and the bad. The girls are almost, almost the group America would come to know and love, the harmonies in places are exquisite, and at times, it soars right into the realm of the best Supremes material.

At others, though, it falls flat; under the skin, it’s not a great song, and after a huge, dramatic orchestral intro (where Diana sounds fantastic), the rest of the tune is driven by the string section more than anything else. Meanwhile, the lyric is both messy and difficult, the haphazard scansion reminiscent of Holland-Dozier-Holland’s earlier efforts, Diana Ross audibly struggling to shoehorn all the required syllables into their awkward allocated spaces. I don’t know if there is a graceful and well-packaged way to stretch the word “neglectfully”, say, into seven syllables, but the way it’s done here isn’t it.

According to the liner notes to The Complete Motown Singles: Volume 4, this was originally earmarked for Kim Weston, which might explain the “bigger” sound (for want of a better word) in play here. It’s clearly outside Diana’s range, but she gamely gives it a good go anyway, and her much higher, thinner voice serves her exceptionally well right from the start, Ross absolutely nailing the song’s very first line – Being hurt by the ONE you love…

But the gods of music give with one hand and take away with the other. That same quality in her voice which makes the intro so remarkable also gives the verses an unintended, shrill kind of fragility that both contrasts and clashes with the banging, non-stop 4/4 tambourine beat that dominates the record. I can’t shake the feeling that this is unintentional, that – unlike the A-side – the clash of form and meaning has no significance and this was meant to sound, well, “bigger” (again) than it already does.

So, does that mean it’s not very good, then? Heavens, no, it’s definitely good. There’s so much to admire once you get over the sloppiness that holds the record back – that intro, the sheer rush of hearing the Supremes drenched in a lavish string-laden production, that incessant 4/4 beat that you can’t help but dance to, the first appearance of the cooing backing vocals just as Diana hits the all in “Who’s often left alone, all by herself”, the chord change on the second line in each verse… all special stuff. It’s just all tied up inextricably with the fiddly, inflexible main vocal line and the occasional ungainly moment of total bombast, and so I can’t separate it out. A shame, as this could have been a great pop song with a bit more work on everybody’s part.

We’ll never hear the Supremes do anything like this again here on Motown Junkies – they’ll never have the time or the freedom, instead hemmed onto a different path by their big break. But it’s a gas alright, alternately charming and thrilling even as its faltering structure trips over its own feet.