b/w He Holds His Own

b/w He Holds His Own

When the Supremes notched an unbelievable fifth US Number One single in a row with Back In My Arms Again, Motown for some reason became uncharacteristically tentative in choosing a follow-up. There was a wealth of great new Supremes material available, much of it recorded for the group’s magnificent new album, More Hits by the Supremes, and any number of potential singles among the bunch – along with stuff like Honey Boy which we’ll never get to meet here on Motown Junkies (but which I have a lot of time for, a record managing to be both Motown-by-numbers and magnificent), there were two particularly obvious picks to be had: the first was The Only Time I’m Happy, the second Mother Dear.

To their credit, Motown did slate both of them as singles – but perhaps the company got cold feet, perhaps their confidence wasn’t quite high enough in either song becoming the group’s mythical sixth Number One in a row, or perhaps there was just too much choice, so many temptations to second-guess one’s hitherto-reliable gut instincts for picking winners, that paralysis struck. For whatever reason, neither of those tracks – great songs both – became the next Supremes single proper. Instead, the final choice was bestowed upon Nothing But Heartaches.

This is an interesting one. In terms of its musical style, it owes little to the Supremes singles that had gone before – and indeed to those two would-be singles already mentioned – and far more to the physical thump and clatter of the work Norman Whitfield had been pioneering with the Velvelettes, taken up so readily by the Marvelettes and Vandellas, a new, more muscular Motown sound. What’s more, it throws us right in at the deep end, as though it’s missing an intro, as though we’ve opened the studio door to find the Supremes already in mid-flow; after a brief guitar riff, there’s almost no time to catch your breath and get your bearings before the song sweeps us all along in its pummelling, tunnelling tow. It’s absolutely remarkable.

But it’s not a single.

I’ve never quite understood how to fit this into the Supremes narrative as far as the pop charts go, and it seems America agreed with me – Nothing But Heartaches not only didn’t become the girls’ sixth Number One in a row, it didn’t even make the Top Ten, a faintly astounding stat when one considers how huge they were in the summer of 1965. It’s very hard to argue Motown didn’t make the wrong choice.

That said, it’s not a bad pick because it sounds so little like the Supremes’ previous singles – indeed, one of the things I found least appealing about Back In My Arms Again was that it was so comfortable, and not enough of an evolution of the group’s sound. This is an evolution alright, tougher and meaner and louder than any Supremes record we’ve yet covered, and I applaud that wholeheartedly – it sounds fantastic. The problem with Nothing But Heartaches, for me, is that it’s a great rendition of a song that’s barely there. 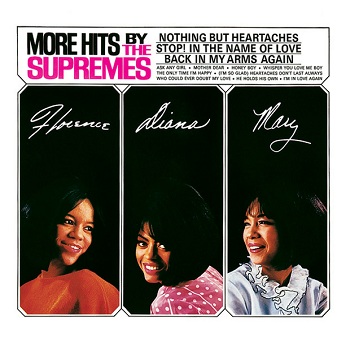 In short – and I can practically feel Supremes fans’ blood pressure rising through the screen as I type this, but then I’m sure people know to expect me to speak my mind here by now – in short, Nothing But Heartaches just isn’t a very good song. It’s a mood piece, a series of hooks stitched together with no great care and no greater purpose than to get your attention and get your feet moving. On the album, where it forms the second half of a killer opening diptych with a demented remix of Ask Any Girl, Nothing But Heartaches is magnificent, a towering overture summing up what’s around the corner: these girls have grown up and they’re ready to knock you on your heels.

The sheer drive of it, not just the barrelling drums and the wailing backing vocals and the unexpected quick repetition in the chorus but also the sense of urgency that runs throughout the track, is absolutely exhilarating; you can’t help but be pumped up after hearing it. It papers over its own cracks as it heralds the coming glory to be found later on the album. And the power of some of those hooks can’t be denied – two moments in particular, the three-line pre-chorus breakdown of “Just keeps me / Keeps me crying / Myself to sleep” with the chorus following right after the third line, and the repeated growling bass sax riff that ends each verse line and then sends Diana back to start the next one, like a typewriter carriage return (a reference for the kids, there), would rank right up there for me.

But as a single? By the Supremes? With the hope of hitting the very top? There’s not enough here. I wouldn’t say it sounded half-formed or unfinished, as in the context of the LP, it clearly does what it wants to do; it’s more that this is a great riff and a couple of great hooks in search of a song. Every time I play it on its own, divorced from the surroundings of the album, I keep expecting there to be more to it, something extra I’d remembered in my mind, and every time it ends I’m faintly disappointed… was that it? Are we sure there’s not something more to this?

A truly great Motown single, and in particular a truly great Supremes single (more so in light of Berry Gordy’s famous declaration that from now on Motown would only be releasing “Number One product” on the Supremes), is something that grabs you, moves you, sweeps you away until you find yourself standing in the record store with money in your hand: something to be taken as a self-sufficient little bubble, an inlaid miniature jewel, something you can play to anyone and say: this is what pop music is about, listen to it, isn’t this incredible?

This one doesn’t do that. Nothing But Heartaches is no masterpiece – the chorus after the main refrain drags on for what feels like two lines too many, running out of ideas before the next blazing moment, and the verses chug along to no particular end. Now, I should be clear that it never comes close to being a bad record. It’s easily as good as something like Needle In A Haystack or Mickey’s Monkey, and just like those two, it’s entirely serviceable as a stopgap single – it’s just never a Supremes 45, never in a million years.

To reuse a phrase from when I was talking about Mother Dear, it’s not what we came for. I don’t mean it’s too much of a wild departure from what Supremes fans might have been expecting; I don’t even mean to suggest that a wild departure wouldn’t be welcome. What I mean is that the last seven Supremes singles, including that run of five Number Ones, were all perfectly formed pop songs (even When The Lovelight Starts Shining Through His Eyes, the messiest and rowdiest Supremes 45 before this one; even Back In My Arms Again, the most plodding.) All of them, for me, have something about them which I can’t quite pin down, but which lifts my soul, warms my heart, shows the hand of genius at work, reminds me again and again how good the Supremes really were. This one doesn’t do that; it’s a riveting record and I can easily see why Motown were seduced into thinking it would work standing out on its own, for people who hadn’t heard the full album, hadn’t got the rest of the pieces of the Supremes’ 1965 jigsaw to be able to process the magnitude of what they’d achieved here. Instead, what this is is their equivalent of Needle In A Haystack, a bold experiment, a bunch of disparate elements that haven’t quite interlocked yet, the glue not quite dry, the finished product not polished up enough to work as a single. It sounds better than Needle In A Haystack ever did – it sounds fantastic, to be fair – and yet it’s built on much softer sand, there’s just not enough song going on underneath the stylistic trappings, threading the hooks together. As a result, while I think it’s good – it’s definitely good – it’s also my least favourite Supremes A-side for almost two years in either direction.

A genuinely thrilling album track, and that’s where it should have stayed.