Canadian singer-songwriter R(ichard) Dean Taylor, who we’ve not seen here on Motown Junkies for the best part of two years (since the heartily stupid but sneakily likeable novelty rocker My Lady Bug Stay Away From That Beatle, a record Taylor himself has since disowned), probably wasn’t expected to resurface. But resurface he did; he’d go on to become a valued writer and stalwart recording artist in the late Sixties and early Seventies, and Motown were surely glad to have him around.

Still, there’s precious little evidence of what’s to come on Let’s Go Somewhere, which is awful. R-Dean (as I’m going to call him from now on) re-emerges from his long hibernation, bleary-eyed in the dazzling light of Motown’s Golden Age (which had sprung into life without him), clutching a new song co-written not only by the label’s golden boy Eddie Holland but also introducing one of the most underrated of all Motown writers in James Dean, and proceeds to make an embarrassing, cheesy stab at getting “down with the kids” delivered in the exact vocal style of Howard Crockett. If there was ever an R. Dean Taylor record that deserved to be disowned by its creator – every tape wiped, every music sheet burned, every vinyl copy buried in a landfill in Arizona – it is surely Let’s Go Somewhere.

The thing is, I generally really like R. Dean Taylor. I’ve seen him sneered at by Motown fans, some of whom didn’t want a pasty, pullover-wearing white guy claiming to make soul music, some of whom can’t forgive him for his country-tinged turn-of-the-decade output, but most of whom just find him too cheesy and mainstream for Motown. I’m going to defend him from those kinds of attacks when we get further down the line, because I think the guy had – has – plenty going for him: an ear for a tune, a knack for coming up with interesting ideas for songs, a nice voice. But then you come to something like Let’s Go Somewhere, which gets it wrong on almost every level, and you just cringe; the sound of R-Dean giving his detractors a free swing.

Briefly: this is a song where R-Dean’s narrator says he wants to go away, him and his partner, to a place where they can be free from discrimination. Instantly intriguing, right? Is this a daring social statement – an interracial relationship, a gay relationship, just a plea for tolerance in the face of prejudice? Nope, it’s R-Dean complaining that he can’t get a fair shake in his boring old straight-laced home town, because he’s a daring young man, a wild free spirit, a long-haired hippy. 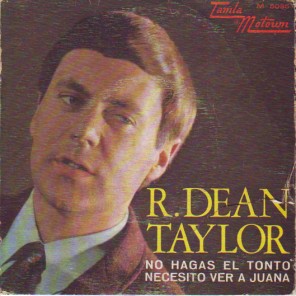 It’s the least convincing thing in the world, and what’s worse is that I can’t work out whether it’s meant to be funny or serious, whether R-Dean is siding with – or poking fun at – the workshy hippies or the button-down squares. Either way, the implications are horrific; either it’s a feeble, cack-handed comedy record, the likes of which we’ve not seen on Motown since the long-gone, unlamented Chuck-a-Lucks, or else it’s sincere and this is what three of the best writers in Motown history really thought hippies sounded like. Leaving aside the wisdom of what is a second novelty record from R-Dean attempting to cash in on a newsworthy trend, it’s a colossal misjudgement, underlining its own deeply square credentials at every turn.

Also, it’s a powerfully annoying tune in its own right, blaring and bothersome and just plain irritating, capped off by a high-tempo bashed tambourine which skitters its way through the entire track, setting teeth on edge right the way along until you wish someone had put their fist through the sodding thing. And R-Dean’s spoken intro is some of the worst acting we’ve yet seen, emphasising just how badly miscast he is, what a terrible idea this all is. And it just sounds unbelievably patronising – not to hippies, I doubt many of whom heard this, but to its intended audience. I don’t just mean lyrically (although, bloody hell, come on), but musically too, the sort of obvious chord progression that any of the Motown musicians could have knocked out in their sleep. That ear-bashing tambourine is just the rancid icing on the inedible cake.

It sounds like someone’s first attempt at writing a song, the product of a jam session, something that should have been played through once for a laugh and then binned forever. Instead, like that tambourine player, everyone seems to have decided the best way is just to commit to it, to put their heads down and grimly plough along in the hope that it’ll turn out okay. It doesn’t – it’s probably the least cool thing we’ve seen here on Motown Junkies in at least three years, not to mention the musically sloppiest, and it only gets worse with repeated plays.

This would have struggled to scrape a couple of marks in 1961 – the backing vocals are quite pretty, and that’s about it – but here at the end of 1965, amateur hour is over, I’m afraid. Just dismal. Sorry, R-Dean.