B-side of I Want A Guy

B-side of I Want A Guy

If the story of the Supremes’ signing to Motown as told on the I Want A Guy page is really true – that Berry Gordy wasn’t interested in the group to start with – then he was certainly won over fast, writing and producing this splendid B-side less than a month later.

Because splendid it is. Not as ambitious as I Want A Guy (with which it would appear on the Supremes’ début LP, Meet The Supremes, the following year), it’s less experimental within its structure, a more straightforward slow-tempo 6/8 doo-wop – but it’s still really good. For a start, the band sounds better than ever; they’d had a lot of practice doing straightforward doo-wops, and they had it down pat by now, with beautiful guitar, Benny Benjamin on brushes and James Jamerson on autopilot. It sounds great.

Diana Ross again takes the lead vocal, and just as she did on I Want A Guy she takes it high and strong. The melismatic opening from the A-side is reprised, a sweet, cooing “ooooh” this time, and again I’m won over straight away.

When I say “won over”, I mean it. I didn’t want to like these two songs. A quick browse around the Internet reveals that nobody else seems to like these two sides. Critics seem to universally describe I Want A Guy as simplistic, ruined by the keyboard part and Ross’ lead vocal. The same critics dismiss Never Again with a contemptuous wave of the hand as a forgettable bit of straight-down-the-line Fifties doo-wop. This is exactly what I wanted to think about these two records before I actually listened to them. As it turns out, these people are so wrong that they deserve medals for their epic levels of wrongness.

Consider: I find Diana Ross a supremely (ha!) unlikeable character. I remain firmly of the opinion that she wasn’t the “best” singer in the Supremes, and while I don’t wholly subscribe to the oft-expressed view that the group were nothing special by themselves, just vehicles for Holland-Dozier-Holland’s best songs, handed their stardom on a plate, empty vessels etc etc, I do often wonder whether given the same material, attention and marketing push, any number of other groups not featuring a Diana Ross front and centre might by and large have achieved comparable results; I tend towards “no”, but I don’t think there’s necessarily anything that admirable in being so determined and bloody-minded and fixated on stardom that you claw your way to the top. And yet because of the frankly astonishing records they made, and the world-conquering success of those records, the Supremes must be considered as one of the greatest groups of all time, regardless of the ingredients for that success. Contradictions, contradictions. 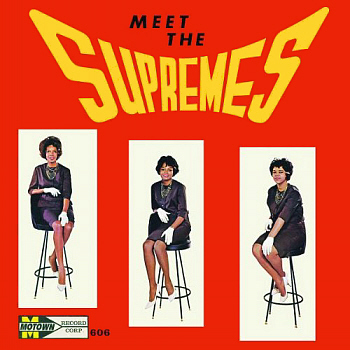 I really, really wanted to hate this record, especially seeing as how negative reviews always single Ross’ voice out for criticism – high, reedy, piping, thin, screechy, you name it. Only the first of those labels actually applies here; I find her lead vocal perfectly-judged and utterly charming, oddly confident (possibly that’s just bravado, trying to impress the crucial judges and secure more leads in the future) and I think it’s unique, possessed of an unschooled, untrained character which brings life to a song that in more polished, more experienced hands might otherwise have just disappeared into the background.

Supposedly, the three other Supremes at the time thought Ross’ lead vocals on these sides were rubbish. They really aren’t, but oddly, when she got a bit more training and experience, her lead vocals in 1962 and 1963 by and large were rubbish – it’s as though this first Supremes single captures something of the group’s “early” sound, before Artist Development and assiduous grooming flattened them out into a tabula rasa for HDH to sculpt back up into a great pop group again.

Consider: The great thing about these sides, the thing that everyone seems to miss, is that they’re young songs, filled with the brio of youth, side A featuring a girl wishing for a boyfriend and kissing her posters at night, side B the same girl trying to cope with being dumped by some callous prick she’d pinned her hopes on (and quite possibly even slept with). The two faces of pining, solipsistic teenage love, you can play them in either order – she gets dumped, she wishes for a better guy, or she wishes for her dream guy so much she shacks up with someone who turns out to fall far short of the mark – but the key thing is that they’re both believable, and they’re believeable because of Diana Ross.

I did everything you wanted me to / ‘Cos I thought your love was true / But I was blind, and I couldn’t see / Why did you do this to me?! / But I still love you, and I always will / I still thrill to your kiss / But I’ll never come back to you, when I get over this / Never again will I fall in love… 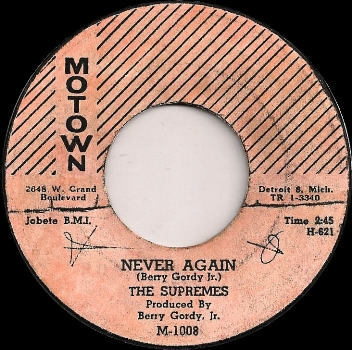 Someone else could have sung that “better”, as in technically better, but they wouldn’t have been a heartbroken sixteen-year-old girl, and they wouldn’t have been able to fake it, so the song wouldn’t work properly. It would be professional and smooth and you’d think “this is nice”, and then you’d forget it and never listen to it again. Whereas this is totally – totally – on the raw edge. You feel it. And when all is said and done, what else do you want from a pop record?

Anyway. The single stiffed, and the Supremes had their crucial self-confidence, so evident and infectious on these sides, knocked right out of them. They’d spend the next two years being shuffled around writer/producer teams, pumping out nervous-sounding, thoroughly mediocre records without ever getting close to having a hit record, enduring jibes and hostility from their labelmates, taking solace only in the long contract which kept them in work during those two long, lean years but which ended up costing them most of the royalties they’d earn when their ship came in. Not coincidentally, their breakthrough came when – at HDH’s urging – Ross made a return to the “girlish coquette” act which would end up making her a superstar; but the beginnings of that are very evident here, and all the more fascinating because in this case it’s actually for real.

I really, really like this record. Does it show?