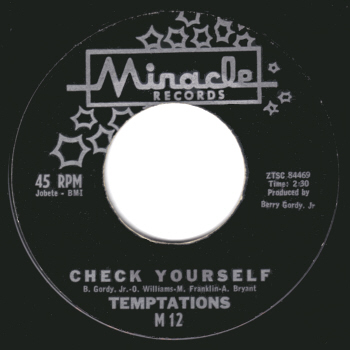 The Temptations’ début single, Oh Mother Of Mine, had been a promising and fun (if hardly earth-shattering) upbeat R&B dancer; a calling card which caught the ear of company president Berry Gordy Jr., whose interest was piqued enough to produce and co-write both sides of this follow-up. As with their début, the Temptations themselves again also pitched in with writing credits.

The resulting single is a stop-start, multi-part multiple-metre R&B piece, probably the most musically-daring thing Motown had released in its three years of existence. It’s certainly the Tempts’ most leftfield, audience-baffling single until Cloud Nine some seven years and a thousand musical lifetimes later.

It’s almost defiantly uncommercial, though it seems certain that it was never planned that way. It makes no sense at all, and repeated listens don’t get the record to open up its secrets any more easily – but it sounds like three different songs clumsily stapled together, and none of them a likely hit.

“Part one”, such as it is, runs from the opening to around 0:20, and features a standard doo-wop backing with the 50s progression being pounded out on the piano, albeit the drummer twice (presumably intentionally) misses the backbeat, as Otis Williams gets into the strangeness right away and delivers an opening line in a different key to the backing – “by and by-y-y-y” – giving the record a haunting, other-worldly quality. Just to add to the weird, Melvin Franklin then starts reciting the words Williams just sang, in his unbelievably deep bass. “What the heck?”, you think, but suddenly the record sits up straight, changes direction and bolts off into the hedgerows.

“Part two” is the meat of the record, and the part which bears the closest resemblance to Oh Mother Of Mine, to the point where the two records seem to have at least been made by the same group; but it’s still far from conventional, featuring a circular high backing vocal riff of check yourself, check yourself, multiple vocal harmony parts (most of them in unfamiliar or unexpected keys, and for unexpectedly short or long durations, to the point where your ear simply can’t follow the changes any more) as well as some perplexing off-beat drumming at the 1:20 mark, what sounds very much like a ukelele part in the background, and a complete breakdown and brief change in tempo and metre at 1:40.

If this weren’t all confusing enough, the minor-key “chorus” (which almost overlaps with the verses it’s so quick and slight – indeed, it might not be a chorus at all, it’s nearly impossible to work out what was meant to go where) offers the listener nothing to grab onto as you’re left bobbing hopelessly along. The song looks to be developing into one long round of that endless check yourself, check yourself vocal riff, while Paul Williams (who it must be said is really good here) delivers a variety of vocal styles over the top of it, alternating from an attractively deep baritone to a bluesy throat-burning squeal to an almost spoken-word drawl.

Suddenly, at 2:09, the music just stops altogether, and instead we’re given a lengthy interlude of long stretches of silence punctuated by staccato piano stings – the tune on these actually sounds quite a lot like the intro to their next single, the tremendous (You’re My) Dream Come True, but it’s impossible to tell whether that was an intentional thing – before the song wanders back into its Part 2 would-be groove (check yourself, check yourself) to fade.

It never sounds bad, as such, not at all – in point of fact, the group are all in fine vocal form throughout the record, and supposedly Eddie Holland was drafted in to provide more vocal cover – but it’s a complicated, difficult listen nonetheless, and it doesn’t reward the effort it asks of the listener. So if a judgement has to be made, if we’re splitting records into “good” and “bad” piles, then Check Yourself has to go down as a bad single, simply because it fails to be a good one. Still, “experimentally bad” is always far better in my book than “blandly bad”, and I applaud the effort; rather this than a million bog-standard off-the-peg doo-wop clones any day of the week.

It’s not just me that thought so, either; both sides of this record ended up being compiled on the Temptations’ crazy grab-bag of a début album, Meet The Temptations, three years later in 1964.

That decision must have been artistic, rather than commercial. Obviously, Check Yourself wasn’t a hit single; I can’t imagine such a weird record with so many varied tempo changes from an unknown group finding much favour on the radio in 1971, let alone 1961 (although supposedly it did get quite a bit of play around Detroit, where the Primes and the Distants (the two groups who eventually coalesced into the Temptations) had been well-known on the live circuit).

It also ended up being covered in 1963 by Gene Chandler (“Duke of Earl”) for Vee-Jay, over in Chicago; despite coming two years later, Chandler’s version actually sounds less alien and unconventional than the Tempts’ original. The cover wasn’t a hit, either.

Even if the Temptations’ single had been more commercially-minded, it probably didn’t stand much chance anyway; Miracle Records was all but finished, and would be folded within the month, its only two bankable acts (the Temptations and the Valadiers) transferred to the new Gordy imprint the following spring.