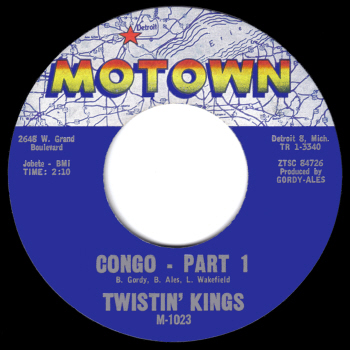 The last flourish of Motown’s ill-fated attempt to jump on the bandwagon of the Twist craze sweeping America. This was the third Twist single the company had released in less than a month, and the second to be credited to The Twistin’ Kings.

As was explained when discussing their previous effort Xmas Twist, the “Twistin’ Kings” were in fact the Motown house band, the legendary Funk Brothers. They’d hastily recorded an entire LP of Twist music, rush-released as Twistin’ The World Around with the Twistin’ Kings just in time for Christmas, but it was a saturated market and Motown’s “me-too” effort had failed to find favour.

The album is a heady, frequently-silly mix of novelty Twist tunes, featuring the aforementioned single Xmas Twist, its B-side White House Twist, and the likes of Old Folks Twist, Mexican Twist, Flying Circle Twist. Most of these songs feature lead vocalists (whose identities remain unconfirmed, though many sources state they’re actually various members of the Temptations) fronting the Funks in an attempt to pass the “Twistin’ Kings” off as a real band, and most of these songs are pretty generic; the band do sometimes get to cut loose, but on the whole it’s a novelty album through and through. (I’ve still got that stupid BOOGEDY BOOGEDY BOOGEDY! vocal riff from White House Twist stuck in my head, several days later.)

The one track on the album which sounds completely out of place is the track which takes up most of side two, labelled Congo Twist. It’s a freewheeling instrumental number which begins with a shout-out to murdered Congolese leader Patrice Lumumba before launching into a seven-minute jam session. Ostensibly “written by” Berry Gordy, Motown sales department guru Barney Ales and Berry’s sister Loucye Gordy Wakefield, it doesn’t really sound “planned” at all; it’s effectively a spotlight showcase for the great drumming of Benny Benjamin, who pretty much carries the record with an extended drum solo in a massive performance.

Supposedly, during Motown’s live engagements, Benny Benjamin would refuse to take breaks between acts while most of the other musicians popped out for a fag and a drink, instead staying on stage doing impromptu drumming displays for fifteen minutes to keep the crowds “up”. You can totally believe it listening to this; the motif is supposed to be redolent of sub-Saharan Africa, but really it’s just Benny pounding the life out of his skins the whole time and daring piano, bass and tambourine to keep up. One gets the impression he’d have quite happily kept it going for the entire duration of the album had he been allowed. I rather wish he had, it would have been quite fascinating.

Quite what in the name of love it’s got to do with the Twist is anybody’s guess; Benny sort of sticks to a Twist-able tempo and rhythm while displaying his prowess, but really this is just energetic, sweaty dance music, and you could conceivably show off whatever moves you wanted while it was playing in the background.

With the inoffensive novelty tunes failing to make a dent on the radio, and thus holding back sales of the Twistin’ Kings LP, Berry Gordy decided to take a different tack altogether, and released Congo Twist as a single. The track’s duration was too long to fit on one side of a 45rpm 7″ single, so he cut it almost exactly in half, cropped out the Lumumba reference at the start, faded out the last minute or so of each remaining piece, and then put them on either side of this, the third Motown single release for the Funk Brothers. Congo (Part 1) thus became the first instrumental Motown single since Nick and the Jaguars’ Ich-i-bon #1 over two and a half years ago.

The limitations of the 7″ vinyl format mean this can’t properly take off as a single. Most of the weird vocal interjections from the album cut (of which more tomorrow) are saved for Part 2; Part 1 is literally just over two minutes of piano, bass and tambourine, anchored by that hair-raising drum part that overshadows everything else on the record, but it’s over before it’s had a chance to stretch its legs, and isn’t long enough to either grab your interest or get a proper dance going before it fades out. You can almost hear dancehall audiences groaning Awwwww! as the fade slashes in; we were just getting into that, they’d have grumbled. It’s just too short, and divorced from its proper context (and two-thirds of its length), it doesn’t have the chance to make an impression. 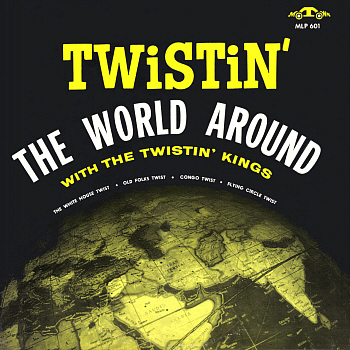 Of course, it was possible to “continue the party” (as the liner notes for The Complete Motown Singles: Volume 1 box set, of which this is the final pair of tracks, put it) by getting up and flipping the record over, but who’d want to do that in the middle of a full-on dance workout, interrupting busting their best moves?

It’s easy enough to discern the purpose of putting this out as a single: to advertise the merits of the album, only one aspect of which had been shown off by the previous single release of Xmas Twist, and give it a bit more credibility with audiences of a less white and middle-class bent. Sadly that’s its only real use; it’s great, but technical limitations mean it’s too short and too quickly over.

The Funk Brothers wouldn’t be granted another single release together for almost three years (by which time new bandleader Earl Van Dyke would be the headlining name on the record), but a few individual Funks did cut both singles and albums for Motown’s new Workshop Jazz label. And of course, they’d be heard – anonymously – on dozens of bona fide classic hits in the meantime. They certainly don’t let themselves down here, though, on the one musical achievement which means the whole Twistin’ Kings project was worthwhile.