b/w Request Of A Fool 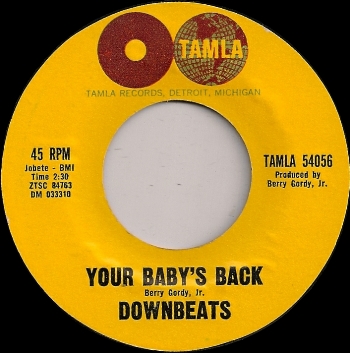 An interesting one, this, albeit less for the record itself and more for the people who made it. The Downbeats, here making their one and only appearance on a Motown record under that name, are the same guys who’d eventually become the Elgins, one of the best unheralded groups of the mid-Sixties Golden Age of Motown.

(I say “guys”, because the mid-Sixties Elgins’ focal point lead singer, Saundra Mallett (Edwards), hadn’t yet been added to the Downbeats mix; this is an all-male vocal group.)

The Downbeats, as they were, were the end product of a series of mergers and line-up changes from a number of local doo-wop groups (the Sensations, the Five Emeralds), and were well-known in Michigan both as a live act and as session backing singers. They’d done some session work for the Lu-Pine label, and at least cut demos with Marv Johnson at United Artists (whether they’re heard on any of Marv’s released UA sides is a matter of debate). This latter bit of hack work seems to have paid off, as it put the Downbeats in touch with Johnson’s regular producer at UA – none other than Motown owner Berry Gordy Jr., who was impressed enough to sign them to his own label, and write and produce this single to showcase their vocal talents.

In the absence of the recently-departed Satintones, Motown lacked a throwback doo-wop harmony group (the label’s other male vocal groups, the Temptations and the Contours, were never really in the same bag, Motown’s initial attempts to market them that way notwithstanding), and maybe Gordy thought the Downbeats could be the group to fill that vacancy. Accordingly, he provides them with a sparse, slow-burning bit of doo-wop balladry, in which band and backing vocals are stripped right back in order to showcase the splendid voice of lead singer Johnny Dawson.

Dawson does well enough (certainly more so than the rest of the Downbeats, who fare no better on backing vocals than the weaker moments of the Satintones before them), but the song – while certainly pretty – is dated and slight.

It’s quite a haunting little tune – a lot of minor chords, little instrumentation to speak of other than a plinky-plonky tack piano, a half-hearted vibes part which can’t seem to decide whether to join in properly or not, and some standard-issue metronomic drums and bass – and it’s appealing in its way, but it’s more of an album track, or an intimate, contemplative number for live shows; it’s never a hit single.

By 1962, doo-wop as a major commercial and cultural force was dying out, supplanted by R&B and rock and roll; any number of great Fifties vocal groups that didn’t move with the times would find themselves sidelined in the Sixties as yesterday’s news. The Downbeats themselves were also victims of this cultural sea-change; the single failed to chart. Berry Gordy Jr. was no mug, astutely spotting the way the wind was blowing, and so however well Johnny Dawson sang here, the Downbeats weren’t offered a follow-up. They’d have to undergo a complete metamorphosis before they emerged again as the toe-tapping R&B Elgins more than three years later.