b/w Baby I Need You 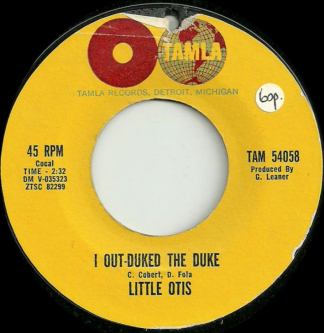 This is a follow-up / homage / rip-off (delete as appropriate) to Gene Chandler’s Duke of Earl, a Number One mega-hit which had risen quickly to the top of the charts; this Motown riposte, one of a whole clutch of “me-too” efforts saturating the market, appeared less than a month later.

Pretty much every review of The Complete Motown Singles: Volume 2 out there singled this track out for special mention, held up as an example of Motown (now well into its fourth year) still putting out shoddy product in the hope of making a quick buck off the back of another record’s success, a habit Berry Gordy Jr. should really have grown out of by this stage.

And, well, maybe that’s true. However, it should be noted that this wasn’t a Hitsville production; “Little Otis” was no Motown artiste, but rather one Otis Hayes, a Chicago songwriter and occasional novelty turn (though he didn’t have a hand in writing this song, the liner notes to The Complete Motown Singles: Volume 2 note his association with various brilliantly-named, idiosyncratically-punctuated indie labels of the Sixties, including One-derful!, M-Pac! and Mar-V-Lus).

This record – originally titled “I Out-Duked The Duke Of Earl” (see the promo label scan, left), before someone in marketing decided that was a bit too on the nose – was given to Motown as a finished master, already recorded and mixed, ready to go; hard to blame Berry Gordy for taking a chance on a cheap and cheerful answer record if one quite literally landed on his doorstep.

It is fairly shoddy, though, there’s no real arguing with that. Opening with a wince-inducing, off-key burst of the main melody from Duke of Earl itself, it very quickly settles into a wearisome pattern of “Little Otis” bragging about how he “stopped the Duke” (a direct response to Chandler’s repeated line “Nothing can stop me now” from the original), mainly focussed on crude physical violence, interspersed with a really forced “Whoa-OH!” before every chorus, over some pedestrian music.

It’s probably supposed to be a laugh-along riot, but it’s not witty or charming enough – it ends up just being boring, a diatribe about our Otis beating up a fictional character for no explained reason. His vocals are grating and tuneless, and the “story” wears thin very quickly indeed, far too quickly for you to get any real enjoyment out of it.

A historical artefact and nothing more, then; not worth seeking out unless you really, really like Duke Of Earl, and even then it’ll probably just annoy you. Two out of ten, and that’s only because the sun is shining and I’ve had a good day; it’d be getting one star if I was feeling less generous (and only then because the system doesn’t go down to zero). Next!