b/w While I’m Away

A second single for the Valadiers, Motown’s first all-white vocal group, following their #89 smash hit (Greetings) This Is Uncle Sam, the only hit record on the short-lived Miracle Records label.

Miracle Records was long gone, but Motown boss Berry Gordy Jr. clearly believed these boys had potential; not only were they transferred to the new Gordy Records label, but Berry personally wrote and produced this follow-up record.

Not that it was written expressly for the Valadiers, mind you. This had originally been one of the handful of songs Gordy had written and produced for Eddie Holland during the latter’s short, unhappy stay on the United Artists label. It had originally been the first “exclusive” UA release for Eddie, following the leasing of his early Tamla single Merry Go Round back in 1959. Like all of Holland’s United Artists releases, it had stiffed – which was lucky, in retrospect, as a lack of sales was the reason Eddie was dropped by UA and came back to Motown.

Perhaps sensing an opportunity, Berry Gordy decided to dust off the old song and revamp it for the young Valadiers. Nonetheless, his willingness to get involved, and his presence in the producer’s chair, speaks volumes about how committed Motown was to the group; proof again, perhaps, of Berry Gordy’s loyalty to those who scored hits for the label, regardless of colour.

Anyway. Sad to report, this record doesn’t come close to either Eddie Holland’s original version or the Valadiers’ previous single – not that that was a particularly great record in the first place. 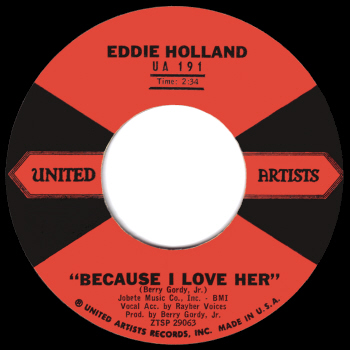 The Internet doesn’t seem to have a readily-available copy of Eddie Holland’s version of this for you to listen to, and so you’ll have to take my word for it when I say that in Eddie’s hands this was a soft, smooth ballad, complete with haunting, echoey female backing vocals (very much in the style of Joe Meek’s production on Johnny Remember Me), plus flutes, brushed drums and plaintive strings. It’s not fantastic, but it’s pretty, and charming, helped along by Eddie’s strong, charismatic vocal, doing his best impression of Jackie Wilson in full-on torch song mode.

In the hands of lead Valadier Stuart Avig (who would later become semi-famous to UK soulies on the Northern Soul scene in his solo career as “Stewart Ames”), however, it’s much less compelling. This version drops a lot of the subtle instrumentation, the female backing vocals and all the other soft touches from the original, instead going for a flatter, bongos-and-horns calypso-inspired sound, much in the style of the excellent Motown releases that had recently been crafted by Gordy’s protégé Smokey Robinson (Mary Wells’ The One Who Really Loves You, the Miracles’ I’ll Try Something New, the Supremes’ Your Heart Belongs To Me).

However, strangely, despite having been substantially rearranged, this version actually sounds less well suited to a group vocal than a solo delivery, and so it comes over much more like an Avig solo record than a Valadiers harmony job. Also, despite the new arrangement, Avig still does a reasonably faithful impression of Eddie Holland’s performance, meaning that this sounds like a third-generation copy of a Jackie Wilson B-side.

I’m being unduly harsh here – this is by no means a terrible record. There are some neat touches, the harmonies (when they appear – they’re little more than glorified backing vocals to Avig’s lead) are better than on (Greetings) This Is Uncle Sam, and the pretty little organ flourishes that flicker throughout the song are redolent of Chuck Jackson’s excellent rendition of Any Day Now – but overall, it’s not especially memorable, nor especially well-performed.

It wasn’t a hit, and Gordy’s interest in the Valadiers waned as quickly as it had reared up. The group would have only one more Motown single release, some eight months later, but they’d already have broken up by then; indeed, the group had just one final, half-hearted recording session at Hitsville before going their separate ways.