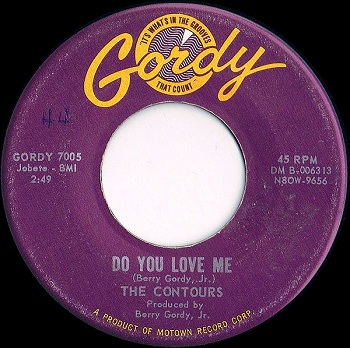 The Contours’ third single, and far and away their best-known record, this blazed its way up the charts and became Motown’s third R&B Number One hit, before being goosed all the way up the charts again more than twenty years later thanks to its prominent inclusion in the film Dirty Dancing.

You probably knew all that, though.

Whenever the time comes for me to have to write something about a really popular song, I’m always at a bit of a loss as to what to do. From looking at the visitor stats (like the obsessive nerd that I am), it would appear most people stumble across this site looking for information about the really obscure stuff. Henry Lumpkin, Nick & the Jaguars, Sherri Taylor, Eugene Remus, the Satintones – they’re all popular choices with visitors to Motown Junkies, probably because there’s been very little written about them in the past, and so there aren’t seventeen pages of Google hits to wade through before you find this place. And when you do, here I am with the information you were looking for. Public service blogging – bam!

Do You Love Me, on the other hand, is one of the best-known of all Motown hits (even if, like the previous two big smashes the label had had prior to this one, Barrett Strong’s Money (That’s What I Want) and the Marvelettes’ Please Mr Postman, many people might not realise it was a Motown record at all). I’m not sure I can really say anything about it that hasn’t already been said already. But for the benefit of regular visitors, and people arriving from page 18 of the Google search results, I’ll give it a try anyway.

This record is a real anomaly, in a number of ways. A big hit for a band who didn’t have any other big hits, an enduring classic that took a lot less time to write and record than many Motown flops, a rough, raw-edged screaming rocker from a label that would come to stand for almost the opposite of all those things.

It wasn’t even intended for the Contours at all; the story goes that Berry Gordy had already sketched out a rough demo with the intention of offering it to the Temptations, then started doing some more work on the song at Hitsville one night, got progressively more excited as he worked, wanted to record the song right away (shades of his middle-of-the-night phone call to Smokey Robinson after he got the idea to re-record the Miracles’ Shop Around), couldn’t find the Temptations, and ended up grabbing their newly-signed Gordy Records labelmates the Contours as they happened to be passing through the building and shepherding them into the studio. The released take of the record was apparently cut right there and then. 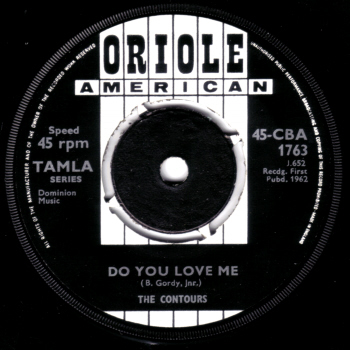 It’s a nice story, and if it’s true then it’s fascinating to wonder what might have happened to the Temptations had Berry Gordy been able to find them and get them to cut this song. As it happens, it suits the Contours down to the ground: the amiable chancers of the Motown family, better known for their (incredible) dancing than their (limited) harmonies, belting out a raucous dancefloor hit. Whether it would have suited the early Temptations half as well is another question (I’m thinking no, personally). The fascinating part is that the barnstorming success of this record, quite unforeseeen by anyone at Motown, ended up hemming the Contours into a restrictive mould, forced down a path of endless virtual remakes and rewrites for the next two years, while the Temptations – much better singers – ended up cutting a string of classic singles under the tutelage of Smokey Robinson. If the roles had been reversed… who knows? The Temptations weren’t really rockers, and the one previous time the Contours had tried to cut a harmony ballad, the result had been the genuinely godawful Funny, one of the worst records in the Motown canon. So if history had played out the way it was apparently supposed to, we might have ended up with a sub-par, quickly-forgotten Tempts rendition of Do You Love Me and never had, say, The Way You Do The Things You Do. Instead, we got dozens of great Temptations records, and one splendid Contours track out of the bargain.

Because this really is splendid. Billy Gordon, who’d lent his awesome raw R&B sandpapery pipes to the Contours’ excellent debut single Whole Lotta Woman, here gives a reprise on lead, and he’s perfectly suited to this song. The slightly baffling speech patterns of the intro (You broke my heart / ‘Cos I couldn’t dance / You didn’t EVEN / Want me around / And now I’m BACK / to let YOU know / I can really shake ’em down), delivered over a bed of high plucked guitar that sounds more like an Italian mandolin mixed with musical saw, are endearing more than anything else. Then the song proper kicks in, and it’s irresistible, carried by two things, Gordon’s screaming vocal and the soaring, Twist And Shout harmonies of the chorus. (They still can’t really sing, but on this one song, it doesn’t really matter.) There are also some other nice touches – infectious handclaps, a sneaky false ending at 2:27 where the music fades down before crashing back in unexpectedly, a lengthy, silly bridge where the backing vocals are buttressed by a series of Brrmm bom bom bom throat noises – and the whole thing really screams “throwaway fun”, a mix that couldn’t help but become a success on the dancefloors of America.

All of that being said, it’s very simplistic and surprisingly dated, even by the standards of the other stuff Motown was putting out in the summer of 1962. A rough and ready R&B attack combined with a Fifties rock and roll setting, a variation on something old rather than a first appearance of something new, this was actually following what turned out to be a musical dead-end, though obviously nobody knew it at the time. This is pretty much the furthest Motown would end up going in this particular direction before all possibility of further development was exhausted.

Despite the litany of varied dance crazes reeled off by Gordon during the course of the song (I can mashed potato, I can do the Twist), at its heart Do You Love Me is really just some Twist music, dressed up as a raucous R&B/rock ‘n’ roll freak-out. This isn’t so surprising when you consider less than six months had passed since Motown had poured a not insubstantial amount of time and money into chasing Twist craze dollars, knocking out three different singles in short order all based on the Twist phenomenon, not to mention the Contours’ previous single, The Stretch, an engaging but ill-advised bid by Berry Gordy to kick-start his own nationwide teenage dance sensation. Ironic, then, that Gordy should tap into that market with a light-hearted, hugely entertaining throwaway record like this.

A cover version by white British band Brian Poole and the Tremeloes, re-timed slightly, with a rockier arrangement and omitting the false ending, shot to Number One in the UK (where the Contours’ original was picked up for release by Oriole Records, but did nothing), the first Jobete song to do so, and it was only the release of Dirty Dancing and its two mega-selling soundtrack albums in the late Eighties that made the Contours’ version the better-known of the two here. So, if there was ever a reason to be grateful to Patrick Swayze, this is it.

The Temptations themselves never ended up cutting a version of Do You Love Me (a ropey 1990s tribute album job notwithstanding), though the Miracles and the Supremes both later had a go; like the Tremeloes’ effort, all three versions seem artificial and contrived in the face of the unbounded joy and exuberance of the crazed original.

No, this is the definitive version of this song, and a good example of an inspired match between performer and material; the Contours’ performance makes a thin song into a super record, while Berry Gordy’s song briefly makes a bunch of tone-deaf dancers into a star recording group. A musical dead end it might be, but it’s excellent fun all the same.