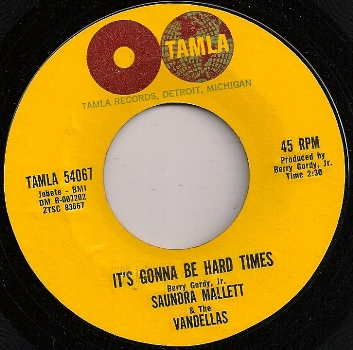 The B-side of Saundra Mallett’s one and only single with the Vandellas is a bit of a strange case. Whilst the A-side, the slightly lumpen dancer Camel Walk, sounded more like a Vandellas record which happened to have Saundra (later of the Elgins) singing lead on it, this B-side is more like an Elgins record which happens to have the Vandellas singing backup. Indeed, four years later, Motown would include this recording on the Elgins’ début LP Darling Baby in 1966, listed as an Elgins track, with no mention of the Vandellas at all.

I have to say, this one is definitely the stronger song of the two sides, a restrained, downtempo jazz-tinged bluesy number with a pretty tune. Not a single, and hardly a classic, it’s still a nice song. It’s also a better recording than the A-side; the band sound good, with warm guitars and trilling, tinkling piano riffs echoing in the background; the Vandellas sound good, Martha and the girls giving deep and robust backing.

Surprisingly, what lets the record down somewhat – and very much against expectations, for anyone who’s ever loved an Elgins record – is the performance of Saundra Mallett, who turns out to be a bit inconsistent here. Opening with an acapella reading of the title, she starts out in sultry jazz mode and looks set to take the song home – but her throaty, sexy, melodious mid-Sixties “Elgins voice” apparently isn’t quite all there yet, and so her delivery is patchy, becoming a little thin and reedy in places; perhaps it’s just the presence of the Vandellas on the track, but I find myself wishing for Martha Reeves to come in and take over. (Or someone like Kim Weston or Brenda Holloway, who this song would have suited almost perfectly.) Saundra was a great singer with the Elgins, but her performance here is all over the place, sailing a little too close to piping and whispery when she tries for sultry and playful, and the instrumentation and backing isn’t ever fully in tune with her. (In fact, the music forces Saundra into some weird vocal gymnastics to try and avoid going into the wrong key, so that she spends quite a bit of the song pitched about an octave too high for her natural range.)

It’s far from awful, and I’m sorry if I’m making it sound that way – it’s not, it’s just a poor match of vocalist and material. The song calls for a coy but earthy lead with lots of quick changes and big high notes to hit; in 1962, on this record, Saundra just can’t quite pull it off.

There would be no more records for Saundra and the Vandellas, but Ms Mallett (later Mrs Edwards) stuck around anyway; once she united with the all-male Motown group the Downbeats to form the Elgins, she would find her rightful place. As for the Vandellas, with Martha Reeves front and centre, they would be riding high in the charts less than a year later as one of the hottest groups in America. So perhaps, given the benefit of hindsight, it was a blessing in disguise that this single didn’t do any business, thereby allowing both singer and group to go their separate ways – just imagine what might have happened if this record had been a hit!