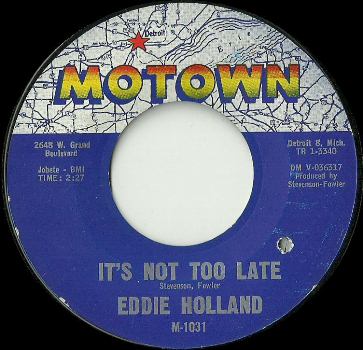 Like the A-side, this is another track from the previously-released Eddie Holland LP picked up and re-used on a single.

This is rather less impressive fare than the enjoyable Jackie Wilson-esque pop of If It’s Love (It’s Alright), instead falling somewhere between a loose, doo-wop influenced rocker (along the lines of, say, the Downbeats’ Request Of A Fool) and a more genteel, restrained Fifties teen ballad, as if the song can’t quite work out what it wants to be.

To that end, we get a politely-pounded piano providing backing; horns and backing vocals so low in the mix that they’re preposterously quiet, almost genteel, seemingly afraid to intrude on proceedings; and Eddie himself also caught in two minds, first threatening to scupper the record with his overly-precise enunciation, and then finding himself unable to keep his performance under control, cutting loose while the band fail to keep up. Frankly, it’s a bit of a mess.

The tune is quite pretty, but all told this is a repetitive, thin, flimsy bit of late-Fifties uptempo doo-wop, a throwback to the sort of material Eddie Holland was already leaving behind at the time of this single’s release.

(POSTSCRIPT (February 2011): Five months after writing the above, with the balance of “agree/disagree” votes below currently poised at a narrow 0-12 against, I thought I should probably dig this out and listen to it again, to see what I was missing. So I did, repeatedly.

And… Sorry, I’m just not hearing it. Commenter “bshoup” below asks whether the apparent disconnect between Holland’s smarmy braggadocio (I didn’t really talk about the lyrics first time around, but this is Eddie’s narrator telling some lucky girl she’s made a critical mistake in dumping him, but that It’s Not Too Late to change her mind, not yet at any rate – You’ll want me, but I won’t be there, he whines), and the jaunty backing music and the mannered, precise diction he employs in his delivery, is an intentional technique. If I understand correctly, the theory is that by adding a mocking undertone to the narrator’s words on the page, Eddie (i.e. the singer himself, not the character he’s playing) is telling us we’re not to take this character piece seriously – that the narrator is meant to come across as a little bit pathetic, a wounded man puffing himself up, playing down the impact of her walking out.

It’s possible, and I’d like to believe it was all intentional, but I’m not really convinced; there’s the whole bit in the middle where he states The day you left me, something happened to my mind! / You left these memories and teardrops behind… I never realised that I loved you so much before, which – while it could fit that theory – strikes me much more as just a string of “songs to the ex” platitudes in a throwaway attempt to add to the genre. Still, I’ve always said dissent is encouraged – and there’s plenty of it here, because I’ve listened to It’s Not Too Late seven times in a row now (it’s playing right now, as a matter of fact) and I still don’t like it.)