B-side of Your Love Is Wonderful

Motown boss Berry Gordy Jr. wrote and produced both sides of this, Hattie Littles’ official début single, following the cancelled Back In My Arms. If the A-side, the engaging Your Love Is Wonderful, had seemed like a conscious attempt to reposition Hattie away from being a blues artist and towards a more R&B/pop place, then this takes things considerably further: it sounds like something that could have been cut by the company’s biggest chart star of the era, Mary Wells.

(Indeed, in several places on this record, Hattie actually sounds almost exactly like Mary Wells – it’s most noticeable in the throaty, come-hither voice she uses to start a mid-song verse (“and then-uh, here you come) at 1:45, but the whole performance is very much in the Wells mould.)

This is a good thing in my book – I love Mary Wells – and it’s done in the service of a really good pop song. Written in the same midtempo style that Smokey Robinson had scored so many songwriting hits with in the spring and summer of 1962, this tale of falling for with a man who’s recognisably bad news (shades of Martha and the Vandellas’ Love Bug Leave My Heart Alone) has a great tune, with each verse leading into a rousing, climbing buildup that crashes into an irresistible chorus – a call-and-response of “Misery!” between Hattie and the backing vocals. 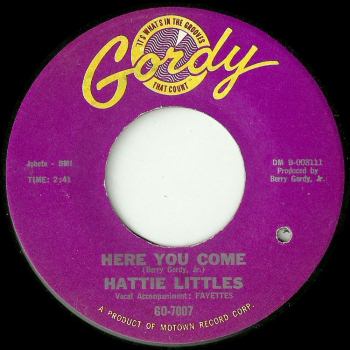 Those backing vocals – credited on the label of some pressings to “the Fayettes”, whoever they are (the recording dates show this was done in July 1962, right in the middle of the Vandellas’ brief stint as Motown’s female vocal backing group; while the vocals here don’t really sound like the Vandellas to me, Rosalind Ashford (see comments section below) has confirmed it is indeed them) – are slightly flat, but that’s really just nitpicking – they do well enough, and reinforce the impression that putting Hattie squarely in a more commercial setting was a great decision.

Mary Wells would have been proud to have made this.

This record in itself throws up a bunch of interesting theories – Berry Gordy wrote and recorded it on Hattie after her previous single release had been cancelled, so was this ever considered as a possible A-side? Did Gordy, who spent 1962 becoming increasingly involved as a full-time businessman (and thus further and further removed from the coalface of songwriting and producing), and who’d long since relinquished artistic control of Mary Wells herself to Smokey Robinson, want to develop Hattie as a project of his own? Or was he just looking to show what he could still do in the R&B/pop crossover stakes? Interesting questions (to me anyway), none of which have ready answers. Whatever the motivation, though, this is a really good record.

Indeed, good though Your Love Is Wonderful is, there’s little doubt in my mind that this would have been a better choice for the A-side. Or perhaps it should have been held back for a follow-up single – Motown would release no further singles on Hattie to follow this one, an extremely belated attempt in 1965 resulting only in another cancelled release.

A pity; perhaps the company simply didn’t know what to do with her, perhaps Hattie (a committed fan of the blues and a keen performer of the kind of big-voiced, jazz- and gospel-tinged R&B that would later be termed “deep soul”) simply didn’t want to play the pop game in the way Motown wanted to package her. Who knows?