Motown’s biggest solo star Mary Wells had enjoyed a spectacular 1962, with two masterpiece singles in The One Who Really Loves You and You Beat Me To The Punch, the fruit of her association with Smokey Robinson as her producer and writer. The third single the pair had created together, Two Lovers, had shown signs of staleness, of Smokey’s midtempo calypso schtick wearing thin; although the record sold handily, hitting number 1 R&B and cracking the pop Top Ten, Robinson couldn’t have failed to notice that the concept was starting to run out of steam.

During the same session as Two Lovers, they cut another song in a slightly different vein – this one. Perhaps this was done with a view to picking an A-side and a B-side; instead, Motown decided both recordings had topside potential, and so Laughing Boy was held back to become Mary’s follow-up single. Here, Smokey tries to freshen things up by adding some newer elements – more guitars, more reverb, echoey drums, female backing singers (the Andantes now credited alongside the male Love-Tones, who’d done so well on Mary’s previous singles) – whilst keeping the same calypso-inspired rhythms and percussion, but the mix still isn’t quite right, and accordingly this turns out to be the weakest of their collaborations to date.

That’s up against some pretty stiff competition, of course, so it’s not to say that this is bad in any way. The band are on splendid form, opening the record with a burst of strummed guitar and tack piano that catches the interest straight away, while the guitar licks that run throughout are perfectly judged. The tune – an expansive midtempo ballad – is something a bit different, a mix of Mary’s earlier calypso hits and Smokey’s dreamlike ballads for the Miracles, while Mary herself is, as always, reason enough to stop by here. She’s asked to do something a bit different to what she’d previously been used to in Smokey’s sessions – this is full of long, difficult notes, and would perhaps be better suited to either a group (you can imagine the Marvelettes absolutely killing this), or someone with a “bigger” voice, in the style of Etta James – and she’s out of her comfort zone, but gives it a great shot nonetheless. Her breathy, sultry style isn’t really right for the song, but it is captivating. 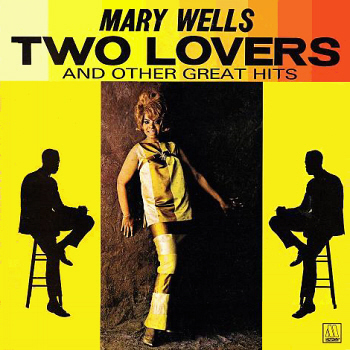 Ultimately, though, the song just isn’t as strong as some of Mary’s previous A-sides. The central refrain – the Laughing boy bit itself – is enchanting, especially the second time around (Your new love, and the guitar riff straight after); but for the first time with a Mary Wells record, I’d really struggle to sing any of the rest of it back to you. (Well, that’s not entirely true, there is one other part that sticks in the mind, but for the wrong reasons – the tacky backing vocal refrain of Ha-Ha-Ha-Ha-Ha! that strikes up right at the start of the song, calling to mind the similar “ha ha ha”s Mary gamely gave in Strange Love but executed very poorly here; an awful idea which doesn’t work at all, and which should have been dropped immediately when Smokey heard how it didn’t fit).

Lyrically, it doesn’t really hang together either – Mary doesn’t believe that her friend and ex-boyfriend (for whom she still harbours strong feelings) is happy in his new relationship, and she thinks that he’s trying too hard to make a public show of being happy when really deep down he’s miserable, but it’s unclear as to whether we’re meant to be on Mary’s side when she asks him to “come back home”. Is the titular laughing boy really miserable, or is this just wishful thinking from Mary’s bitter narrator? We aren’t given enough information to know, or enough reason to care.

Lacking a strong chorus and lyrical hooks, the record failed to match the commercial performance of Mary’s 1962 hits, missing the pop Top Ten and stalling at a still-respectable number six R&B; but the lustre was definitely starting to wear off, and for the first time there were elements of doubt that Smokey knew just how to turn things around.