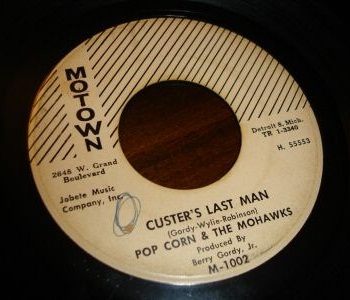 Richard Wylie, known universally as “Popcorn”, was an interesting bloke; a strong pianist, he played with the Funk Brothers on several early Motown hits before leaving in 1962 to further his own recording and songwriting career with various labels. He returned to Motown as an artist in 1971. He was also responsible for bringing his schoolmates James Jamerson and Norman Whitfield and jobbing session guitarist Eddie Willis to Hitsville as part of his band, the Mohawks; Jamerson and Willis were among the earliest Funk Brothers and would play on literally thousands of Motown recordings, while Whitfield became one of the company’s greatest producers and songwriters.

Before any of that, there was this novelty comedy record, an unabashed attempt to cash in on the success of Larry Verne’s Mr Custer, which had been a number one pop hit a month or so previously.

The line between parody and outright rip-off is teetered on dangerously throughout this record. It sounds almost exactly like Mr Custer – the reworded cowboy movie chant intro is almost identical, the repetitious bass/guitar/drum backing – which plays the same riff throughout the length of the record – is very similar (although well played, and much superior to Verne’s), and at one point the similarity is explicitly acknowledged with a direct lift of Verne’s line “Please Mr Custer – I don’t want to go”, sung in exactly the same fashion, in case anyone hadn’t got the joke by then.

This is a long record – almost four minutes, although the pitiful “comedy” drags so much it actually feels even longer – and it tells the story of a modern army patrol touring the battlefield site at the Little Bighorn and coming across an apparent survivor of the battle, still alive, digging a gigantic hole in the ground. The entire record is a dialogue between the modern soldiers and the old man in the hole, identified early on as the same guy as in Mr Custer with all his lines sung in the same comic voice.

The song is effectively a novelty “cut-up”/”break-in” record, a bizarre Fifties/Sixties phenomenon whereby a story – usually narrated by a straight man – would be punctuated by snippets from hit records, often supposedly in response to the narrator’s questions, either providing an incongruous or surprisingly appropriate answer and thereby deriving painfully weak comedy. This one is a bit different in that it doesn’t actually use real bits of other records, instead just referring to the songs, having the snippets be sung by the “old man”.

The songs referred to are, in order (deep breath): Mr Custer itself; Etta James’ All I Could Do Was Cry (written, not coincidentally, by Motown boss Berry Gordy who also co-wrote this nonsense); Brian Hyland’s terrible Itsy Bitsy Teenie Weenie Yellow Polka Dot Bikini; one of the two then-current hit versions of Tell Laura I Love Her; Yogi by the Ivy Three; and finally Move Two Mountains by Motown alumnus Marv Johnson, another Berry Gordy composition.

Actually, the last of these adds a surprising note of poignancy to this otherwise totally throwaway novelty artefact, whereby it is revealed the old man is still alive because he is toiling under a curse placed on him by a Native American shaman, allowed to live but condemned to spend eternity trying to literally move two mountains, and he begs the soldiers to leave him alone to keep digging his hole and complete his task – a strangely deep, contemplative, Sisyphean note on which to end this outstandingly stupid comedy record.

Obviously, the record sold very poorly (obviously), though there was some modicum of success in the fact that those involved don’t appear to have been sued. Listen once, let it raise a faint smile or two, be bemused by the surprisingly downbeat ending, and then forget all about it.