b/w Locking Up My Heart

B-side of Locking Up My Heart

The Marvelettes’ magnificent third LP, Playboy, had been released to general acclaim in July 1962. When Motown struggled to push the newly-released follow-up, The Marvelous Marvelettes, the following February – the lead single, Strange I Know, hadn’t exactly set the world on fire, and Locking Up My Heart wasn’t looking like doing much better – they opted to go back to the Playboy album for the latter’s B-side.

It seems like a cautious, hedging-their-bets kind of move on Motown’s part, belying a conservatism that would crop up time and time again throughout the Sixties and Seventies, with singles from brand-new albums routinely paired with B-sides from two, three, four years previous if the company got cold feet over how the fans might react. In this instance, however, it’s a blessing that Motown chose to package Locking Up My Heart with Forever; this is one of the Marvelettes’ best records, and it deservedly hit the charts in its own right.

(It did so very possibly at the expense of the A-side, incidentally, DJs tiring of the strident screeching on the top side and flipping the record over to get to the dreamy ballad; both sides ended up within one place of each other on the R&B charts, this one going one better than the A-side by reaching number 24, although Forever stalled at number 78 pop while Locking Up My Heart limped up to 44. But I digress.)

One of a clutch of songs written for the Playboy LP back in the spring of 1962 by Brian Holland and Lamont Dozier with their then-lyricist Freddie Gorman, this is maybe the standout track on an exceptional album. Notably, it’s also the first truly great lead vocal ever laid down by Wanda Young, who would later go on to become the the group’s undisputed leader throughout the mid- to late-Sixties, but who usually played second fiddle to Gladys Horton at this point in time.

A lot of Wanda’s early vocals are shrill, screechy showcases for the very high falsetto she thought she could do, sometimes bordering on the unlistenable (Eddie Kendricks of the Temptations was suffering a similar fate over in the boys’ camp at the same time), but not this one. Here, she delivers a beautiful lyric with such grace and maturity that it’s almost impossible to remember she was sixteen at the time of recording.

(Indeed, quite honestly, in her lead outings up to this point she’d given no indication whatsoever that she even had a performance like this one in her – I don’t know if it was Holland and Dozier’s idea to coax her a few notches down the scale, or whether it was Wanda who surprised them by coming out with this, but it’s startling.)

Here, though, she’s amazing, delivering the lyrics in wholly convincing fashion, lyrics that are quite different from anything the Marvelettes had really tackled before now – an honest, soul-searching examination of what it means to really be in love with somebody:-

Darling, forever, forever / You can break my heart / I’ll play the part of a fool / Just to be with you, forever… You can torment me / Take my love for granted / But I’ll always be just a fool, if I could be with you… I’ll be your slave for the rest of my days… Just to be with you thrills me through and through… 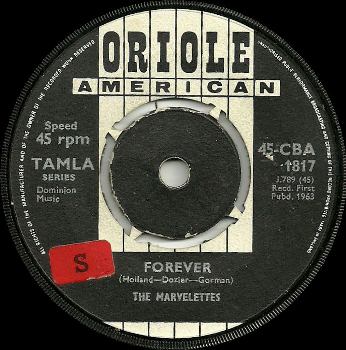 It’s extraordinary, something you’d expect from the finer moments of Smokey Robinson, or his work for Mary Wells – but not from the Marvelettes, and certainly not from Wanda of all people. And yet here it is. Prior to the Playboy album, a lot of people would have underestimated her, and the group, as a bad singer and a thin, one-dimensional pop act; they wouldn’t be making that mistake again. Wanda is so good here mainly because she’s so restrained – Mary Wells, or Kim Weston, or Diana Ross, or (more pertinently) Gladys Horton, might have been tempted to really attack this, with a big-voiced approach, wearing their emotions on their sleeve; instead, Wanda gives this an almost eerie calmness, spelling out just what lengths she’ll go to in a completely matter-of-fact way that sends chills down the spine. It’s perfect.

The tune is quite, quite lovely, too, a slowly-rotating piano-led ballad, rooted in doo-wop, with tasteful brushed drums and barely-audible organ in the distance, while the hushed tones of the other Marvelettes are kept right down in the mix, giving the whole thing a delicate, almost dreamy atmosphere – the perfect vehicle for Wanda to lay her soul bare. The whole thing is really just beautifully done.

If anything, it’s actually a kick in the teeth for the A-side, because it sets an almost impossibly high standard that Locking Up My Heart, passable but ordinary, can’t hope to live up to.

It’s not a single, mind you, not by any stretch of the imagination, and certainly not a Marvelettes single. This would never hit the Top Ten; it’s too slow, too billowy, the lyrics are too disturbing. But to quibble over what this record is not is to miss the point. What this record is is quite, quite magnificent; the Marvelettes would never really revisit this kind of territory, and it would be years before Wanda managed anything on this level again, but it remains remarkable, and wholly excellent.