(Reissued as a B-side for a later single)

Brenda was the second Motown song Edward Holland Jr. wrote on his own (the first, the engaging Just A Few More Days, was also a B-side recorded by Eddie himself), and it was liked well enough to be used twice, appearing as the flipside of two different Eddie Holland singles during 1963.

It’s a completely different side of Eddie than had been displayed on the A-side, the uptempo Fifties-flavoured rock & roll/R&B stomp Baby Shake; instead, this is a slow-paced ballad, again with more than a hint of the Fifties about it, and not dissimilar to Eddie’s previous single, Darling, I Hum Our Song, except not as catchy or likeable.

None of which is to say it’s really bad or anything, it’s just kind of nondescript. Lyrically, it’s more about the narrator than the titular “Brenda”, apparently his ex-girlfriend; but lacking insights into his character on any deeper level beyond “I wish we hadn’t broken up”, it comes over as a meaningless ode to a girl we still know literally nothing about by the end, apparently so christened just to rhyme with “tender”. 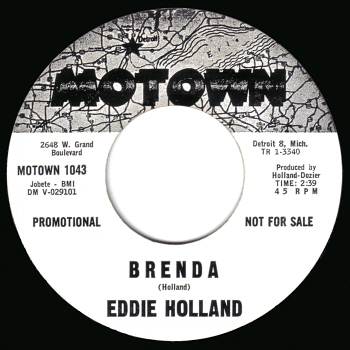 Musically it’s nothing special either; apart from a few little flourishes of horns and a couple of pleasing counterharmonies from the female backing singers near the end (Can’t carry on without you, Brenda), the best you can say about it is that it’s just, well, there, really.

It’s perfectly inoffensive, indeed it’s quite pleasant as background music, but that’s about it. Not only does Brenda not sound like it came from the pen of one of the all-time great songwriters, it doesn’t even sound like it belongs in the top ten records of Eddie Holland’s career as a singer.

Even more bafflingly, having made absolutely no impression on anybody when first released, this wholly nondescript B-side was then dusted off and resurrected eight months later, pressed into service as the flip of Eddie’s long-awaited comeback hit single Leaving Here. As with its initial appearance as the underside of the hip-jerking Baby Shake, one can only assume that Brenda was chosen to back up Leaving Here because it shows off a completely different side of Holland’s repertoire, both as singer and writer. That the “different side” in question turns out to be a knack for slightly insipid MOR was apparently not deemed worthy of consideration; the end result is that this is one of a tiny handful of pre-1964 Motown tracks to feature on more than one Motown single, a distinction that makes this appear far more notable than it actually is.

You wouldn’t turn the radio off to avoid it, but you probably wouldn’t go out of your way to hear it (or intentionally play it very much) either; nice enough, utterly forgettable, time to move on.