It’s one of the great ironies of music history that Jackie Wilson, the superstar vector for Berry Gordy’s big break into showbusiness as a songwriter, never himself got to sign to Motown. Wilson remained under contract to Brunswick Records – just where Gordy had left him – throughout the Sixties and early Seventies, the entire duration of Motown’s time in Detroit.

Meanwhile, Edward Holland Jr., who had first come under Berry Gordy’s wing doing demo vocals for the songs Gordy wrote for Jackie Wilson, thanks to Holland’s uncanny similarity to Wilson in voice and singing style, was now making a name for himself as a highly regarded songwriter; but in spite of the success he was starting to enjoy, “Eddie” (as he was always billed on his own records) was still plugging away at a stillborn singing career, with grim determination but limited commercial reward.

As 1963 progressed, Holland was starting to pull away from the performing side of things and towards the more lucrative business of songwriting, encouraged by the fiscal success his little brother Brian and writing partner Lamont Dozier were having, while Eddie struggled to make ends meet with his performance royalties. Eddie’s own records between the summer of 1962, when his one and only solo LP Eddie Holland was released, and the end of 1964, when he called time on his singing career, were increasingly carefully-crated affairs, usually written by Eddie himself alongside Brian and Lamont, usually produced by Brian and Lamont, usually identifiable somewhere in the archaeological record of the Holland-Dozier-Holland team’s mid-Sixties heyday. But to Berry Gordy, and thus to Motown, Holland’s songwriting career and his singing career were two quite separate things; Eddie Holland, the artist, was a commodity just like any other Motown performer.

Much had changed in the years between the late Fifties (when Eddie, then an unrefined, gawky teenager, had done all those Jackie Wilson demos) and the spring of 1963, but Wilson remained commercially relevant; indeed, “Mr Excitement” had just released a barnstorming new dance record, Baby Workout, which had set radio alight, and which was on its unstoppable way up the charts (making Number One R&B and peaking at #5 pop).

Berry Gordy could never be accused of failing to jump on whatever the latest bandwagon appeared to be, and the early years of Motown are filled with his attempts to ride the coat-tails of various passing trends, artlessly and shamelessly; one gets the impression that if a group of Inuit throat singers had somehow scored a pop hit in the summer of 1962, Motown would have had their own version in stores within a month. And so it was with Baby Workout and Baby Shake; Gordy would hear a hit record, commission (or in this case, write himself) a soundalike, pick up sales, pay the bills. It was a tactic which resulted in very few big hits, but plenty of steady, unspectacular income. 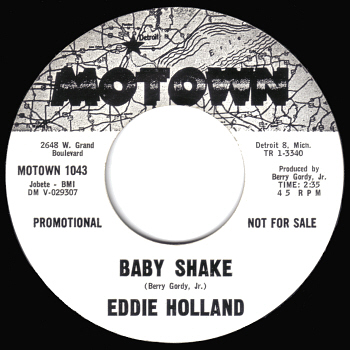 Eddie Holland was the obvious choice to record Gordy’s soundalike – not only was he possibly the world’s most qualified Jackie Wilson impersonator, he was a Motown artist who hadn’t had a hit record in a year and a half, and a company man to boot. Eddie had a history of being very pliable when told to record what the boss wanted him to record – see (If) Cleopatra Took A Chance – and he didn’t balk at this latest request, the track cut and in stores within two weeks flat.

I can’t find a video clip of the actual Jackie Wilson record (though the live performance linked to above is plenty of fun, right?), so you’ll have to take my word for it when I say that Baby Shake is a pretty brazen soundalike (down to the off-tempo burst of brass at the start before the record proper starts up), with similar tempo and (mostly) similar instrumentation; there are female backing vocals doing a lot of the heavy lifting, keeping things bouncing along to free up the lead, just as they had on Wilson’s record, but here they do it in a far more dated style – a style that sounds like they’re recording a 1948 radio commercial for toothpaste or something.

It all just sounds slightly anaemic compared to the infectious energy of Wilson’s record, missing especially the stand-up bass that dominated Baby Workout (and which you can’t really hear on the live version I linked to above, but trust me, it’s excellent). Coming full circle back to where his career began (and presumably not delighted with the idea), Eddie nonetheless gamely gives it his best shot, but his strangely clipped, mannered diction never really approaches Wilson’s loose-lipped fervour, and his performance seems slightly restrained, as though he’s always holding something back; there are none of the whoops and screams from Wilson’s record, and the semi-shouted attacks Eddie employs in their place (I wanna see ya on the floor!), ever so slightly out of tune, are engaging but not really the same.

It’s fun enough in its own extremely limited way, and as always you can actually hear the smile on Eddie’s face, which is always endearing; but it sounds much more dated and much less vital than the record it’s trying to copy, and it’s not something I’d expect people go back to very often. (Then again, I thought that about It’s Not Too Late, a review which at the time of writing has nine “disagree” votes – so maybe Eddie’s fans are more persistent than I’m giving them credit?)