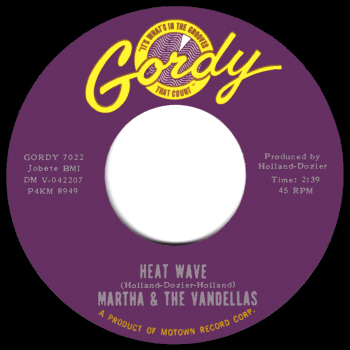 When I first bought The Complete Motown Singles: Volume 3 (which, for the uninitiated, comes with a working replica 7″ copy of Heat Wave strapped to the front), it arrived on my desk at work. Every person who came into my office that day and saw it there began spontaneously singing Heat Wave. Every single one.

If I had to sum this record up in one word, it would be “confidence”. The band are confident, trying out all manner of new things – layers of baritone sax, horn crotchet notes on the beat of a tambourine, a different rhythm pounded out on vibes and piano together – all of which would come to be ingredients in the so-called “Motown sound”. The producers and songwriters are confident, happy to leave all vocals off what should be the entire first verse and chorus of the song, introducing America to the record as an instrumental. Rosalind Ashford and Annette Beard are confident, providing some of the best backing vocals in Motown history with laser accurate precision. Martha Reeves is confident, sounding like a veteran with fifteen Top Ten smashes under her belt, rather than a 21-year-old relative newcomer who’s had one solitary Top 30 hit single to her name. And, most importantly, the tune is confident, barrelling along and charging up the scale: young, brash, energetic, optimistic, unstoppable.

That first, instrumental “verse” is remarkable enough; opening with a crash of drums leading to a barrage of guitars, handclaps and saxophone, the sheer momentum of it all demands attention. That probably explains the decision to keep the vocals under wraps for such a long time; it’s the sound of the Funk Brothers showing off everything they’d learned so far, and just how far they’d come. (Nelson George: “The melody and lyric ride over a rhythm track clarly derived from the interplay of the musicians among themselves. That record is imbued with the spirit of a lively, fun-loving musical ensemble. It is not a producer’s record; it’s a band record, though HDH gave it structure.”)

But then, after almost half a minute of instrumental fun, the band trading blows and licks, up steps Martha Reeves. No warm-up needed for her, she starts off at top volume. Sure, you were enjoying what the band were doing, but they’ve had their showcase. Pay attention to me now.

You’re singing it to yourself now, aren’t you? The way Martha delivers her lead fastball-style, it sounds like every line should have an exclamation mark at the end. It’s particularly appropriate with lyrics like these – the whole song is full of visceral, energetic imagery, a reinterpretation of falling head over heels in love by some people who’ve thought about what “falling head over heels in love” might actually look like, especially if it happens on a flight of steps. But the real hook hasn’t even been introduced yet.

I know what Nelson George means, and in many ways he’s right – this has the carefree exuberance of a freewheeling jam session mixed with the professional rigour of a rigid studio chart – but the Vandellas’ vocals don’t merely “ride over” the rhythm track, they bolster it, augment it, become part of it. Where the band have already introduced us to the rising scale of saxophone, piano and vibes, reaching a pounding plateau before the whole thing starts over again, producers Brian Holland and Lamont Dozier are clever enough to (a) allow the listener to hear what it sounds like without the Vandellas first, and (b) then have Roz and Annette go up the scale with the instruments, creating an unstoppable rise to the top for Martha to blast that line without stopping for breath, ready for all three Vandellas to get to the summit together and shout “HEAT WAVE!” in unison. Killer hooks don’t come any better than this – momentum, anticipation, reward. The first time it happens, the listener’s attention is grabbed, almost forcefully; the second time, the listener knows what’s coming well in advance, and feels not only entitled but encouraged to join in with it.

Picky critics have rounded on Heat Wave in the past for not employing more musical diversity – and they’re not wrong, as it’s really the same verse/chorus structure, rhythm and melody used throughout the entire song, masked by some neat tricks in the arrangement and by Martha and the girls’ clever vocal shifts. But they’re missing the point. Once the basic structure has been established by those first two verses and choruses (one instrumental, one vocal), the listener can use that knowledge to hold on to the song while HDH and the Vandellas throw everything at them. You never know exactly what’s coming up next, while never losing your grip on the relentless rhythm or the song’s basic structure; whatever happens, whether it’s a saxopone taking over for Martha for a verse, or the climactic weaving of shouted voices and harmonies, you know there’s going to be another “HEAT WAVE!” coming along soon. A clever trick, straight out of the Puccini playbook, and for that reason, it’s among the catchiest pop records I can think of – which explains why all those people sang it in my office that day, and why you’ve probably got it in your head right now.

It’s just such a buzz, this record. You’d have to be made of stone not to crack a smile by the time we get to the middle verse and Martha exclaims:

I can’t explain it / Don’t understand it / I ain’t never felt like this before!

But then she ups the ante even further. “Now that funny feeling has me amazed / Don’t know what to do, my head’s in a haze, it’s like a heat wave… and Martha’s voice tails off quietly, for the first time on the record. She doesn’t fully engage with the shout of “HEAT WAVE!” this time, and you’re wondering what’s going on, until she instead reappears off the beat a split second later with a full-on shout of YEAH YEAH!, which signals the start of the busy, almost overloaded later phase of the record. A series of interlinked vocal lines all ducking and dovetailing in and out of one another, seamlessly picking up on the main line or the backing refrain, switching between patterns with no notice whatsoever given to the listener… I love it.

So did the American public, sending this right up the charts to blast a hole at the top; Motown’s eighth R&B Number One and a Top Five pop hit to boot, some of its success has traditionally been ascribed to the actual heat wave that struck the USA during the late summer of 1963 (and the record’s use on weather bulletins reporting on it), but I can confidently state that this sounds good whatever the weather (it’s absolutely pelting down outside my window here in Wales at the time of writing, and Heat Wave still has me dancing). Yet it’s still unmistakeably the sound of summer – turn this right up when the sun is shining on the grass on a beautiful July day, there’s simply nothing to beat it.

A remarkable record, and one of the best singles Motown ever released. There wasn’t any doubt as to what mark I was going to give it, was there?