B-side of Just Loving You 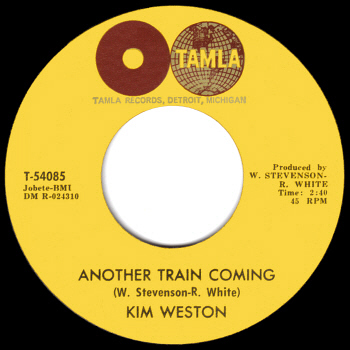 Of course, it’s now widely known that Kim Weston didn’t go on to become a superstar; Motown never even released an LP on Kim, and she’s best known today for one much-played, long-lived duet (of which more later).

But nobody was to know that back in the autumn of 1963; with Motown on the cusp of its eye-poppingly successful “Golden Age”, with hitherto-unknown Hitsville acts beginning to rack up hits left and right, Kim must have seemed at least as good a bet as anyone else to break through to the big leagues.

Love Me All The Way, the B-side of Kim’s début single It Should Have Been Me, had handily outperformed the non-charting A-side, resulting in a minor pop hit on the Hot 100. With the A-side here, Just Loving You, also failing to chart, Motown must have hoped that lightning might strike twice with this more uptempo B-side.

This, though, is much less riveting than any of the other three sides Kim had cut for Motown to date. Miss Weston sounds ill-at-ease with the backing musicians throughout, the arrangement apparently flummoxing her to the point she actually drops out of key a couple of times (most unlike her).

The song’s not a bad one, not at all, but it definitely doesn’t suit Kim’s massive voice, and so she does her best to keep it hidden, almost all of the way through the record. The effect isn’t half as enchanting as when she’s free to really go for it; unreasonably restrained, she still sounds rich, but also flat and occasionally tuneless.

There’s just one big-voiced flourish, in the middle of the song (the If your man wants to leave, let him go / But I won’t take you back part, the first reminder that we’re listening to a Kim Weston side), and not coincidentally it’s by far the best bit of this record.

Otherwise, it’s all pretty workmanlike; perfectly adequate B-side fodder, listenable enough, but not anything to linger over.