By the time Bobby Breen arrived at Hitsville, he was in his late thirties and already seen as washed-up. A former child movie star (and a genuine star at that, a top box office draw and one of RKO’s most prized assets), he had the good fortune to be spotted as a passable kid actor with a fine voice just as the Hollywood vogue for sound musicals came into full force. But once puberty kicked in, Bobby’s act was done, and his career with it, Breen having failed to transition to adolescent and adult roles. He made his final movie at the age of 14 before becoming a full-time singer, doing some club work and cutting a few schlocky pseudo-standards in the Fifties before drifting into obscurity. By the time Motown picked him up, he was positively prehistoric; it was already ten long, lean years since he’d appeared on The Comeback Story to talk about the challenges he’d faced moving to a new career and how hard he was finding it to get work.

Still, the lure of signing a white MOR star was too great for Berry Gordy to resist, regardless of whether said star was on the downswing of his career, and so it came to pass that in mid-December of 1963, Bobby Breen arrived at Hitsville to try and revive his flagging fortunes. 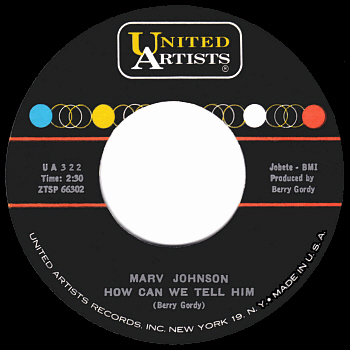 Berry badly wanted Bobby to succeed, too; the boss dusted off an old Marv Johnson number he’d written for Marv over at United Artists, a complex story of a bittersweet love triangle, and then took charge of Bobby’s first Hitsville recording session, which resulted in this single. Bobby was Motown’s first white male crooner signing since Don McKenzie back in 1961; sadly, he was almost as ill-fated.

Perhaps it was just that his time had already passed; the fortuitous timing of his birth which led to his first career also meant he was too late for what could easily have been his second. A voice from another age, an age of innocence when Italian crooners dominated the airwaves and the pop charts, and quite at odds with the fashions of 1964.

Instead, in these surroundings, Breen sounds a bit like Roy Orbison drowning in a bathtub of fondue, his precise and mannered diction redolent of Eddie Holland’s most irritatingly precious moments. His performance is wedded to an already wandering song that’s been given a particularly cheesy new arrangement, practically wallowing in misery and self-pity.

Worse, it doesn’t even make sense. Marv Johnson’s original version cuts straight into the main refrain of the chorus – a pair of clandestine lovers trying to work out how to break the news to the woman’s current boyfriend, who also happens to be the man’s best friend – before Marv reveals he’s not the cheating friend but the current boyfriend who’s overheard all of this, and he feels bad for them having to tiptoe around. Not the clearest of scenarios, and for Bobby’s version, things are rewritten, moving the explanation right to the start of the song. Rather than have Bobby sing the lines, Gordy instead demands an ultra-naff spoken-word intro to provide context:

My true love, and my best friend
I love them both ’til the very end
Though they hurt me – how they hurt me!
They made me die within!
When I heard them say…

…resulting in some (ironically) poor acting and convoluted songwriting twists, all apparently in order to distance wholesome, clean-cut Bobby from the distasteful idea of considering shacking up with another man’s wife, no matter how momentarily the listener would be under this impression. Instead, the lyrical swap-around changes the focus of the song, casting him from the very start as the moping, cuckolded third party and sacrificing the ambiguity of the original’s clever (if confusing) twist. It’s a miscalculation, because after a couple of minutes of this, you’re positively rooting for the illicit lovers rather than our Bobby – certainly I feel like breaking up with him by the end.

There are a few nice chord changes amid the MOR gloop, and Bobby is at least trying, so it’s not getting a 1 – but it’s still a pretty poor start, all told.