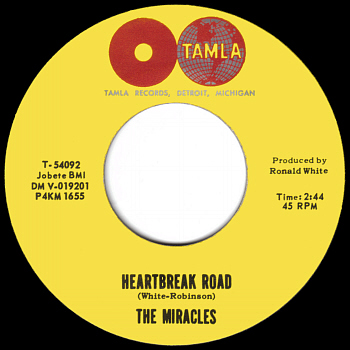 An astonishing eighth song from the Miracles’ 1963 LP The Fabulous Miracles to be pulled for use on a Motown 45, and by now the barrel is being scraped loudly enough to cause a disturbance.

Alright, that’s a bit unfair. A jaunty little ballad originally cut back in the winter of ’62, this starts off likeably enough, Smokey giving a determined and committed performance of a weak lyric – until the Miracles show up, all of them apparently out of key, as if to underline just what a throwaway little diversion this really is.

Fine enough as album filler, with its plodding, shambolic gait and inventive use of mariachi horns, but unlike the Marvelettes’ recently-exhumed Goddess Of Love (another album track that had already seen a birthday by the time Motown pressed it into 45 rpm service), taking Heartbreak Road out of the context of the album it’s lifted from only serves to highlight the weaknesses of the record; while it worked well enough on the LP, that’s really where it ought to have stayed.

The A-side (You Can’t Let The Boy Overpower) The Man In You, whilst hardly vintage Smokey, was the first Miracles single written by Robinson in eleven months – something of a surprise given he’d hitherto been credited as a writer on every Miracles platter since before Motown even existed, a run stretching back to 1958. Eyebrows may have been raised, then, when no new B-side was forthcoming to accompany The Man In You, Motown instead dusting off an album track which by now was positively prehistoric. Now, Smokey had turned in plenty of good songs for other Motown acts since then, so there was no cause for alarm, but more than one observer must have questioned whether the magic was still there when it came to writing for his own group. This wasn’t the record to allay those fears.

Motown’s musical standards had risen dramatically in the 18 months or so since this was first cut, and by those increasingly rarefied and demanding standards, this rough-edged R&B scribble just wasn’t up to scratch any more.