B-side of Only You 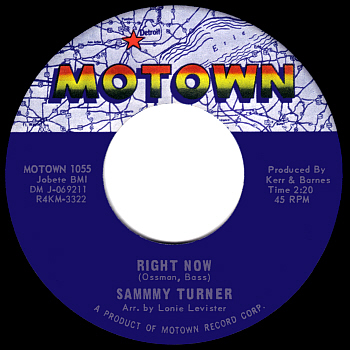 Following on from the A-side, a sub-par cover of the Platters’ Only You concocted by Motown’s recently-opened NYC office in an ill-fated bid to revive turn-of-the-decade crooner Sammy Turner’s career, here the flip brings more bombast and bluster without substance.

This is a huge number in terms of both writing and production, amateurishly executed on both fronts. A big, heavy show tune, bedecked with strings and choirs, a series of climactic choruses full of huge notes; these were seemingly conceived as opportunities for Sammy the vocalist to really show off his stuff, with a flourishing, full-on “big finish” scheduled almost every twenty seconds.

It meets with only limited success; whilst Right Now is probably closer to the way George Kerr and Sidney Barnes (who produced both sides) intended Only You to sound, it’s still dependent on Turner to bring it home, and he doesn’t really live up to his end of the bargain.

The whole thing is an imitation of depth, of “classic” status, rather than anything approaching the real thing. The kettle drums and swooping strings are great, but the tune doesn’t actually do anything – a collection of final lines from Vegas standards, two full minutes of the payoff from My Way or New York, New York but without any of the buildup. It’s compelling to start with, even thrilling, but the showiness and chest-thumping quickly grates as you realise the record’s left itself nowhere else to go. Meanwhile, Turner’s lead vocal, as with the A-side, is technically competent but totally devoid of emotional interpretation, such that there might as well not have been any lyrics at all – you’d get the same impact if he was just singing a scale. (Also, there’s a badly out of control “popcorn” bongo percussion rippling away in the background and punching all manner of holes in the hull of the record’s stately, classy facade.)

Impressively puffed-up, but on closer inspection it’s absolutely wafer thin, and there’s nothing here to get your teeth into at all.