b/w When I’m Alone I Cry

b/w When I’m Alone I Cry 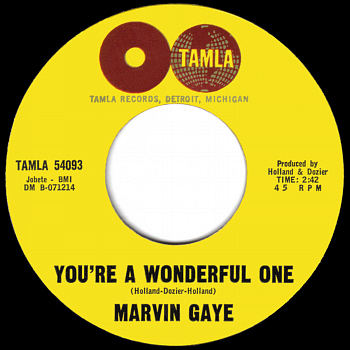 Marvin Gaye had made a breakthrough into Top Ten territory with his last single, the rollicking Can I Get A Witness, and so – as was becoming standard Motown operating procedure – that song’s creators, the hotshot Holland-Dozier-Holland writing and producing unit, were tasked with crafting a soundalike follow-up.

They carry out their task with diligence alright, though it helps that they’re armed with the Funk Brothers, who were getting better and better by the day; a twanging guitar riff replaces the stabbing piano licks from the earlier hit, but otherwise we get the same barrelling pseudo-gospel attack, the same turbocharged, passionate delivery. That applies to both band and vocals, of course. But Marvin could knock these out in his sleep and make them sound good; when he really dedicates himself to his work, as he does here, it’s never less than riveting.

(Never mind the source of his inspiration to stick to an assigned job – in this instance, the prospect of a grisly MOR standards LP looming on the horizon – just enjoy the results.)

In many ways, this is to Can I Get A Witness as Martha and the Vandellas’ Live Wire (not Quicksand) is to Heat Wave: similar in sound to its more famous wellspring (though noticeably more aggressive, more driving) but markedly different in tone. Here, despite the belting backing track, the subject matter’s lighter, more straightforward than the restless, desperate pleading of Can I Get A Witness. The earnest search for approval is replaced by the simpler notion of a song of praise, reflecting the (increasingly distant) gospel roots of the backing – sure, it’s praise for a beloved companion rather than the Almighty, but it’s a song of deeply felt devotion nonetheless.

And it is deeply felt, too – “You’re really more than I deserve / From my heart, I speak these words”, he pledges, and we’re left in no doubt that he means it. When Marvin’s on this form, he could sell you London Bridge, so a bit of heartfelt loving seems to come almost as second nature. In his quasi-autobiography Divided Soul, Gaye confided he had his then-wife Anna in mind when he gave this delivery, one of his best from this early period; regardless of what we know happened later in that turbulent relationship, somehow knowing Marvin was thinking of someone in particular rather than a generic songwriter’s cipher to be his “wonderful one” makes everything that much more resonant.

Much, much more than the derivative sum of its musical parts, pretty much entirely thanks to the band and to Marvin himself, now every bit the superstar. Very nearly a classic in its own right, this remains excellent fun, immensely playable and endlessly listenable stuff from Motown’s best male vocalist.