(“Written by Howard Hausey and Bruce McMeans”, it says here) 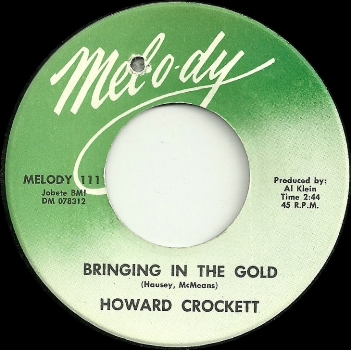 Howard Hausey, a poor man’s Johnny Cash who performed under the stage name “Howard Crockett”, was a mainstay of Mel-o-dy Records, Motown’s little-remembered Country & Western subsidiary; not only did he cut five singles for the label, he also wrote a great many songs for other Mel-o-dy artists to cut. Here, he teams up with Bruce McMeans, better known as “Bruce Channel”, to turn in a shockingly poor effort which not only fails in pretty much every possible way, but which also lifts its chorus wholesale from Bringing In The Sheaves. Coming as it does hot on the heels of some superb Motown records, this one couldn’t be less appealing if it came in a sleeve made out of rusty barbed wire and broken glass.

Crockett’s previous Motown effort, The Big Wheel, had been surprisingly good, Hausey swapping his natural warm, fuzzy, avuncular persona in favour of an engaging sneer and a low, growled delivery; certainly compared to its B-side, the horribly cloying That Silver Haired Daddy Of Mine (a badly-done Gene Autry cover), it was a masterpiece.

For the follow-up, our Howard goes for somewhere in between. This one tries to be bad-ass, featuring the story of a fatal mine robbery followed by the lynching of the unrepentant perpetrators (the narrator’s entire family) as they sing a song about gold, but Hausey gets squeamish on us and spares us any unseemly detail (or indeed any detail at all), instead playing up the folksy family angle, making it hard to work out what’s meant to be happening.

The record can’t decide what it wants to be – a titillating true crime story, a moral sermon, a song about a young person’s tragic loss, a song of religious faith in the face of certain death? It could be any of these – and it ends up not working on any level and satisfying nobody.

As mentioned, the story doesn’t make sense – we’re introduced to the young narrator, who’s got a great life living in “a little mining town up in Mar-i-copee County” with his Maw and his six brothers (“I had me a big horse to ride, Maw had them thick carpets on the floor… I guess a boy just couldn’t ask for more”, he tells us, doubtless referring to the timeless love young boys have always shown for quality carpeting). One night, a visitor comes by to tell Maw that someone has robbed the mine and two men are dead; Maw asks “do you know who they be?” and the visitor says it’s too dark to see. Now, my first reaction was that Maw was concerned about the identities of the men who’ve been killed, in case it’s two of her sons – but no, it turns out she means did anyone see who did the robbery, because she’s apparently sent her sons out to do the deed and wants to know if they got away with it. Then, “the law” shows up, takes the entire family away – in front of the narrator – and hangs them all from a tree. They meet their fate singing the titular song about “bringing in the gold”.

Just about everything is wrong with this. The story is garbled and full of plot holes, the main vocal is a joke, Howard trying to add serious gravitas by putting in nonsensical pauses, but showing no emotion at all other than when repeating his Maw’s comment asked if she had any last words (Boys – let’s SING!), the music is standard-issue Johnny Cash knockoff fare done competently but without enthusiasm (and too loud), and – best of all, this – when we get to the chorus, when the family gathers round the “pie-anna” to celebrate successfully robbing the mine and gunning down two innocent people by singing “Bringing In The Sheaves” only with the word “sheaves” replaced by “gold” (do you see?), one of the backing singers forgets what he’s meant to be doing and sings “Sheaves!”, really loudly before realising his mistake. That nobody bothered to order a second take speaks volumes about the amount of care that went into this shoddy, slapdash little helping of sentimental tripe.

Really, really poor, even by the already-low standards you might expect of a country cover of “Bringing In The Sheaves” about bank robbery and mass lynchings. Certainly the days when Mel-o-dy Records used to release stuff by Lamont Dozier or Martha and the Vandellas have never felt further away.