B-side of Try It Baby

B-side of Try It Baby 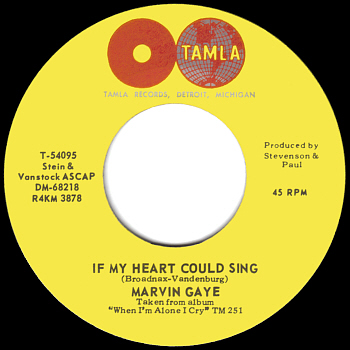 During the course of writing this blog, there have been times when I’ve expected some controversy and none has arisen – and, equally, there have been times when I’ve thought I was stating the obvious, only to find I’m apparently out of step with public opinion. I have no idea what you’re all hearing in Try It Baby – I wondered briefly if I was listening to the wrong song? – but, hey, if you all love the record and it’s me that’s got it backwards, well, more power to you.

I’m not anticipating much of a backlash over this B-side, though. Sad to report, this is pretty dismal.

It’s been well explored on Motown Junkies before now that for all Marvin Gaye’s newfound success and stardom as a top-drawing R&B/pop act, what he really wanted, deep down, was to be the next Nat King Cole. Here, in 1964, after a few hits but before the hangers-on and the heroin, he was still very much in that particular headspace. Strip away all the trappings of fame, stick the 1964-model Marvin in a high-end supper club, give him a mic, a spotlight and a stool to sit on, let him close his eyes while candles flicker on the tables of discerning white patrons… he’d have taken that deal in a heartbeat. 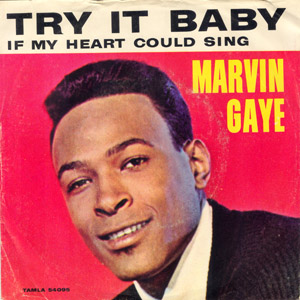 But there were two huge flaws in that kind of talk which meant it could never happen that way for Marvin, even if he was seemingly oblivious to both of them.

Firstly, the public were emphatically not interested in Marvin Pentz Gay Jr., MOR crooner extraordinaire; when given the choice between a Stubborn Kind Of Fellow and a When I’m Alone I Cry, the punters voted with their wallets, early and often.

Secondly, and rather more crucially, he was absolutely not the new Nat King Cole. However much Marvin wanted to do standards and middle-of-the-road material, it’s just not his strong suit. On the bland, pseudo-standard MOR sides he did cut – like this one, for instance! – his voice is technically excellent, but he lacks emotion, connection (with either audience or material) – more than one account describes Gaye’s approach to these as methodical rather than emotional, concentrating on hitting the right notes rather than putting any of himself into the performances, and I can well believe it. He seems to treat this sort of material as a series of vocal exercises, showcases to prove he could really do it rather than anything to really commit to. There were no offers on the table from the supper-club circuit, and that couldn’t be solely chalked up to the fact Marvin had been seen shaking his ass on TV to Can I Get A Witness, no matter how firmly Gaye convinced himself that was the case.

Motown head honcho Berry Gordy, no idiot, had astutely called all of this correctly, right from day one, back when he’d first signed the handsome jobbing session drummer – see I’m Afraid The Masquerade Is Over for more evidence of this – but he knew he had to manage Marvin’s expectations. The boss understood that in order to get the best out of Marvin Gaye the R&B chart star, the price might be a certain amount of indulgence of Gaye’s doomed fantasy ambitions. 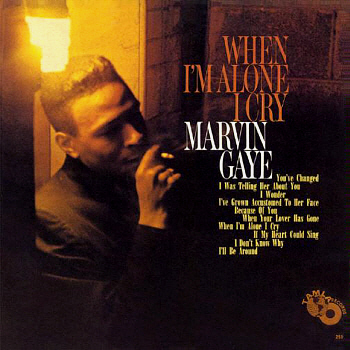 And so it came to pass that Motown released the LP When I’m Alone I Cry (left), a beautifully-jacketed platter of total MOR mush that Marvin himself allegedly offered to underwrite in order to have it pressed up.

Marvin was very popular by now, and he looks so handsome in the tastefully-lit cover shot that When I’m Alone I Cry must have shifted a few copies on the strength of that alone, but it’s hard to know what a crowd of swooning teenage girls made of the album when they actually got it home. Whatever the case, it clearly didn’t make enough of an impact for Motown to consider themselves happy with the return on their investment. They’d already issued the title track as a B-side a few months earlier, and now they dusted off another song from the album for use as a flip, maybe in the hope that buyers of Try It Baby might rush out to the shops to see what they’d been missing, or perhaps as a reminder of Gaye’s versatility as a performer.

Either way, it’s a mistake. This is another “pseudo-standard” published by Jobete’s MOR arm, Stein and Van Stock, writer Mickey Stevenson again credited as “Avery Vandenburg”. Orchestra horns, upright bass, brushed drums, soft-jazz piano noodling, and Gaye noodling too, aimlessly vocalising over the top in a manner so forgettable I couldn’t quote two lines of this back to you right now even though it’s actually playing as I’m typing.

This is the sort of directionless slop I really can’t abide; a tuneless dirge sacrificing melody for a vague melodiousness, sticky with self-satisfied lethargy, inhabiting some sort of horrible hinterland between Mantovani and Manilow but without the hooks. It’s not Marvin’s fault, although he’s never more than adequate on this one; there are hundreds upon hundreds of records that sound exactly like If My Heart Could Sing which leave me equally cold, songs from the soundtracks of stagey, long-forgotten Fifties movie musicals and hokey, long-forgotten Fifties stage shows. When writing about the title track, regular contributor 144man absolutely nailed what I find wrong with this stuff:

When I first heard this track back in 1964, I thought that it was music suitable only for the old folks. Now it’s 47 years later, and I still don’t feel old enough to appreciate it.

I doubt there has ever been a time when this was the Sound of Young America. Banal and boring, the main value of If My Heart Could Sing is as a constant reminder of how even the all-time greats could falter if they strayed too far from their home turf. I love Marvin Gaye, and I really don’t want to listen to this again.