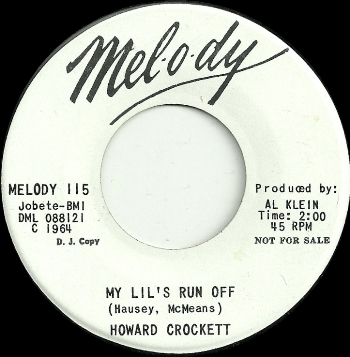 We’re back! But you may be wondering if my happiness at having a working computer again has addled my brain. (It hasn’t. Or, at least, I don’t believe it has.)

Adding marks out of ten to these reviews is a lot of fun, both as a handy summary and an instant conversation starter.

Still, I often wonder if it makes you jump straight to the mark before reading the review (indeed, if you arrive from the Master Index, or a category archive – those are great, by the way, click on the name “Howard Crockett” at the top of the post to see what they do – then you can’t avoid seeing the mark first.) If you saw the mark here first, you’re probably wondering – with some justification, I might add – how I could end up rating this half-arsed country ditty, a subpar diversion that really has nothing to do with Motown, higher than a much-loved track from the mighty Temptations. Well, I’ll tell you.

Howard Crockett (né Hausey), by now the mainstay of Motown’s little-loved Mel-o-dy Records C&W side label, was both less famous and less good than his stablemates Dorsey Burnette and Bruce Channel (the latter copping a co-write credit here under his real name), but this was the third of five singles Howard ended up cutting for Motown and he’d written plenty more songs for other Mel-o-dy artists. Al Klein of Dallas was supposedly in charge of Mel-o-dy, but based on the output, there’s certainly an argument to consider Crockett as the Smokey Robinson of Motown’s first abortive country venture.

The comparison ends there, of course. Howard’s singing voice is straight out of the Johnny Cash playbook, and when it works (as on his career highlight The Big Wheel) it’s rather engaging – but he can’t really sell it consistently. It’s not just that I’d never believe Crockett (for instance) “killed a man… just to watch him die”, but also that I don’t find myself tolerating his gloopy saccharine excesses anywhere near as much as Cash, because he’s just not a likeable enough singer or narrator. Add to the fact that despite an ear for a tune, his lyrics often don’t really make sense – a bad problem in “story” songs like this one, as seen in Bringin’ In The Gold – and you’re left with something that feels remarkably like a budget-brand version of Johnny Cash, like the cornflakes you buy if you can’t afford Kellogg’s.

He’s got the moves down here – this is probably Howard’s best vocal since The Big Wheel, showing again that he’s at his best when he gets to be embittered and mean, as opposed to warm, fuzzy and friendly. My Lil’s Run Off, a jilted husband’s lament, has a few such moments for Crockett to get into; the darkly amused aside at the half minute mark (He did a good job of sellin’ my Lil, that travellin’ man!) is excellent.

But the song, yet again, doesn’t make sense. He took my woman and he took my diamond ring / He’s the kind of guy who sees the best in everything, he says admiringly of his rival, and several times in the song we’re left squarely on the side of the departed Lil, who seems to have dumped the narrator for being an incredible drip who’s made nothing of his life and still lives with his parents. Even when she leaves, taking “everything that wasn’t nailed down” with her, he’s still pleading with her for another chance. It could have been a splendid comic portrait of a broken man, but Howard plays it straight, as though he’s set out to write a jilted-lover revenge song and then run out of steam (and balls) halfway through. The song just isn’t good enough.

A bold attempt, then, at repositioning Crockett as a tough, mean narrator in the Johnny Cash mould – but an attempt which falls rather flat, instead casting our Howard as the wettest and wimpiest of characters.

My Lil’s Run Off is probably less fun to listen to, all told, than the Temptations’ Baby Baby I Need You. So why is it getting a better mark?

Right, well, first off, the marks aren’t actually that important – apart from the 10s, which are my carefully-chosen 50 favourites, the marks are just a snapshot of how I happened to feel on the day. I often want to change them afterwards (I never do, just because it’d open up a huge can of worms), and they’re not relative, so it’s entirely possible you’ll catch me saying record A is better than record B, but marking them the same, or the wrong way round, or something.

But more importantly, after more than 450 of these things, I find myself judging records according to different sets of standards. Smokey Robinson has been a particular victim of this – I hold the Miracles to higher standards than most, because I know what they’re capable of when they’re “on“, so what’s acceptable for an average writer/singer is below-par for Smokey. Similarly so for the Temptations, or any other big-ticket act I’ve already seen produce pure magic.

By contrast, manifestly limited cloggers like Crockett, or Bobby Breen, or whoever, aim much lower – but by their own standards, for me, they achieve more of a success than a top R&B act phoning it in and messing it up. (It’s not the same as someone shooting for the moon and missing disastrously – that can be spectacular in itself – I’m talking more about the clunky, ugly, “will this do?” type efforts from groups we KNOW can do better.) Howard is at least really giving it his all here, doing what he presumably wanted to do, and it’s to his credit. Which means, in some strange fashion, I find this to be a “better” record than Baby Baby I Need You. Yes, it’s strange, I know.