b/w Should I Tell Them

b/w Should I Tell Them

I adore the Velvelettes, but – although it has a status approaching something like a signature tune – this is actually my least favourite of the six Velvelettes singles we’ll be seeing here on Motown Junkies. “Least favourite” being a relative term, of course; it’s still way above average.

This was the group’s first official Motown release, following their abortive earlier effort There He Goes back in the spring of 1963, which had been shot down by Quality Control and ended up sneaking a release – licensed or otherwise – via the IPG label. The positive reaction to that single led to the Velvelettes, now down to a three-piece, getting a shot at a “proper” Motown 45. It was an opportunity only grudgingly granted, and the group – educated middle-class girls with college commitments, unable to drop everything and move to Detroit at a moment’s notice – didn’t get back to the studio until the summer of 1964, having lost ground to their labelmates that they’d never make up.

The red carpet wasn’t exactly rolled out; despite being assigned to work with the same writers and producers (Mickey Stevenson and Norman Whitfield) who’d been so impressed the first time around, the Velvelettes were shunted to VIP Records, already the neglected member of the Motown label family. If singles on VIP didn’t actually cost any less money, it’s still hard to think of it as anything other than Motown’s budget imprint, especially with that hideous, “no expense spent” yellow label.

So when the Velvelettes turned in what is manifestly the best A-side in VIP’s catalogue to date, and promptly scored the label’s first ever hit on any chart – going Top 50 pop and just missing the Cash Box R&B Top 30 – you’d have expected Motown to take notice, maybe move them to a higher-profile label. But Motown was already well-served for excellent female vocal groups (the Supremes, the Vandellas, the Marvelettes), and so the Velvelettes remained in the shadows for the rest of their short time at Hitsville. It wasn’t for want of great records, that’s for sure.

This one still feels a bit like an early effort; all the ingredients are there, everything’s almost ready, but it doesn’t quite gel together.

On the one hand, you have Mickey Stevenson and Norman Whitfield’s vision for a new Motown Sound – distinct from that being perfected by Holland-Dozier-Holland, tougher and louder, guitar-heavy and with more of a blues influence – which would go on to reap great rewards over the next eighteen months. On the other hand, you have a bunch of standard Brill Building girl group tropes (including a doo-lang doo-lang refrain lifted directly from the Chiffons’ He’s So Fine). The juxtaposition of the various ingredients – Marvelettes-style sass, Chiffons-style clean-cut girl group good times, coruscating sax, muscular bass and heavy drum echo, all great elements in their own right, is a mix that jars every time.

It’s somehow unsatisfying for that reason – Whitfield and Stevenson would shortly be mastering the art of combining sweetness and drive (and unbelievable percussion!) to come up with some great productions, and the Velvelettes would be the best exponents of their art, but for the moment everything about this record seems slightly awkward, slightly forced.

Hard to put your finger on many specific moments, but Cal Gill’s lead vocal seems to be struggling to compete in places, the lyrics call for a knowing, older narrator (Cal herself admits in the liner notes to The Complete Motown Singles: Volume 4 she didn’t really understand what this was meant to be about), the messy lead-in to the chorus just doesn’t quite sit right, and the one-chord guitar riff and foot-stomp rhythm – hypnotising in its own right, as with the intro – seems to come from a different song altogether compared to the Sha-doop! Ba, ba, sha-doop! backing vocals. I don’t know, it just sounds… wrong, somehow. 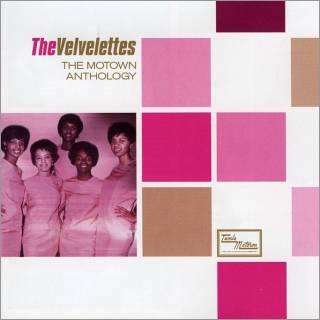 There’s greatness here too, of course – these are the Velvelettes, after all! – not least the fact that it’s absolutely packed full of hooks. Some of them (the drilling intro, the sax break that squeaks as it hits the roof, the crotchet pulse orchestra hits at the end of the chorus) are down to the band, but most of them are the girls’ work, showing off their remarkable skill and timing for interplay.

If the Shangri-Las-meets-Shirelles style back-and-forth the song aims for never quite comes off (What’d I say, girls?), it’s because the vocals are already in a more sophisticated place than your standard throwaway teen drama. The unexpected bounce up the scale when Cal sings I’m telling you girls: you’d better LOOK! / before you LEAP, yeah!, with Norma and Bertha joining her at the top for Leap! before cutting back to backing vocals as Cal gives it the full Mary Wells for the rest of the verse, is a work of art. And the smoky quaver in Cal’s opening lines – Well, well, I once believed / All fellas were nice – presages her outstanding work on the group’s follow-up single, He Was Really Sayin’ Somethin’.

There’s more than enough here to make it a very good Motown single, and as a calling card it’s hard to top; they were about to get it completely right, and that much is obvious from this record alone even without knowing what was around the corner. But then, knowing what’s around the corner probably makes me go harder on this than I otherwise might.

It’s good, but never in a million years is it the one they deserve to be remembered for. A work in progress, a hint of the shape of things to come, that also happens to be very groovy in its own right. That the Velvelettes’ weakest Motown single is still several orders of magnitude better than most artists’ best should tell you all you need to know.