(Released in the UK under license through EMI/Stateside Records)

Another Top Ten hit for both Marvin Gaye and the so-hot-right-now Holland-Dozier-Holland trio, all the more impressive coming as it did in the wake of the relative failure of the last Marvin-HDH single, the excellent Baby Don’t You Do It, barely two months earlier.

In many ways, this one is something a departure for both Gaye and the writers. Marvin, as regular readers will know, harboured ambitions to be a jazz crooner, a superstar of the supper-club circuit, the next Nat King Cole; possessing no real talent for that genre to match his boundless enthusiasm (at this point, he’d just cut his third LP of standards and show tunes in a futile attempt to try and get a foothold in that market), he seems almost annoyed to have discovered he was actually an excellent R&B pop singer instead.Holland-Dozier-Holland, meanwhile, were on a hot streak the likes of which Motown had never seen before. Stories of their all-night sessions and “production line” approach are legion; anecdotes that have them handing lyric sheets to the singer in the studio while Eddie was still writing the next page, images of three guys who haven’t slept for days, slumped at pianos, or lying on couches, or the floor, surrounded by sheets of paper, pencils behind their ears.

But just because they were so prolific, burning the candle at both ends and then trying to light the middle too just to get the thing to burn just a little more brightly, people shouldn’t assume they were slapdash, cranking the machine and churning out the hits. They were serious about what they did.

Tasked by Motown with writing Marvin Gaye a pop hit, they set about finding a perfect mix, something that could straddle the worlds of hip-shaking teen pop stardom and eyes-closed soft-jazz croonerdom, and then they kept revising it up to and including the point Gaye had to go and tape his final lead vocal. But they weren’t messing around, and Marvin, a brooding and self-critical character even at the best of times, seems to have responded well to the scholarly approach HDH took to their craft. “I felt comfortable with them. They were very serious producers and I understood where they were coming from”, he said later. The time would come when Marvin Gaye would bristle at being told exactly what to do, especially by three young guys who gave the impression they were making it up as they went along, but for now the partnership worked, and this was by far its biggest commercial success to date. It romped to the Top Ten both R&B and pop, while in the UK (where this was rush-released, leapfrogging several US Motown hits we’ve already covered, to coincide with Gaye’s touring live in England), it gave Marvin his first chart action, unlucky not to land a Top 40 hit.

Is it better than Baby Don’t You Do It? No, it’s not even close. 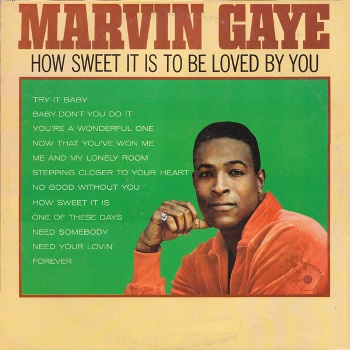 For me, this was ruined before I ever heard it by the movie American Pie, in which it’s treated as a kind of cheesy pseudo-standard sung by a school choir, based on the hideous 70s whitebread version by James Taylor, a quintessentially naff arrangement sung in a style and key which really highlights the queasy MOR sheen that lives just under the song’s surface.

(The worst moment, in this or any other version, is when the lead singer says I wanna stop! and the backing vocalists all pile in on the word Stop!, and there’s a sudden dead air stop, just for a fleeting instant in Marvin’s version compared to whole bars in others; but that’s a part that’s highlighted in the movie, and it makes the whole thing sound as though it’s being performed by a high school jazz choir for an audience of bored parents, rather than, say, some of the greatest singers and musicians in history shooting for posterity. It makes me physically squirm.)

In effect, HDH did their jobs too well: there’s schlock in this song’s DNA, and while Gaye only hints at its presence, other, less skilled interpreters dug it right on out and rubbed the listener’s faces in it.

I’m not marking this single down for the failings of other, awful cover versions. I just mean that the very existence of those other, awful cover versions, the ease with which this can be turned into an MOR staple, highlights the song’s weaknesses in advance. By the time I got to Marvin’s original, I was already sensitive to the self-contained, tune-within-a-tune nature of the chorus and verses that overpower any delicacy Motown and the Funk Brothers bring to the table. We’ll meet two more instrumental covers here on Motown Junkies before we’re done, but even those – not to mention the best version that exists, the Isley Brothers’ eye-opening cover – can’t completely rescue it for me. To me, it’ll always sound like Marvin (or Choker, or Earl) doing an interesting and intelligent cover of a James Taylor song, rather than Taylor ruining a Marvin Gaye song, and I can’t unhear it.

Which leaves me in a bit of a pickle, I guess. Marvin is in his heaven here, getting to play both crooner and pop star at once, and it always sounds better when I actually play it than it ever does in my head. But – bass aside – it’s not as good as the Isleys version, it always feels like it’s about to slip into James Taylor at any moment, and – let’s be honest, here – I just don’t like the tune. However well-written it is, however excellent HDH’s intution for creating something with the hallmarks of an MOR standard without it actually being one, it sets off schmaltz alarms in my head, alarms delicately calibrated by thirty years of instinctively avoiding processed cheese and MOR pap. Is any of that really the record’s fault, rather than mine? Is it fair to slag off one of the biggest early hits by one of the greatest Motown artists, just because I don’t really like it?

In the end, I don’t suppose it matters too much. Nobody’s reading this in order to find out what the record sounds like; I’m guessing you either want me to love it, or hate it. In fact, it’s neither. I can certainly appreciate the skill and care that went into it, that it’s well-made; it sets out to sound like a cover of some unheard white radio staple, and it manages its task splendidly. And there are things about it I do actually like in an unqualified way. Marvin Gaye is excellent here just by dint of being Marvin Gaye, doing what he does best, which works in the record’s favour, and there’s plenty of little bits of this I’d gladly hear again and again – the bass is outstanding. But the singalong chorus sounds incongruous with the cooler, sparser, more detached air of the verses, parachuted in from some other song, and however many covers there have been, however many first dances at wedding receptions have taken place to it, it’s still just not that good of a chorus.

(Plus, for a tale of joy and devotion, Marvin never really sells it, it never really swells the heart like his similar declarations of happiness in, say, Pride And Joy. But then, maybe it would do a better job if Hollywood hadn’t co-opted it for me first.)

It’s not terrible, and unlike the last Four Tops single, I can see how this could be someone’s favourite Marvin Gaye song. I’m expecting another avalanche of “disagree” votes in protest. But, honestly, this feels like an artefact from some other, cheesier version of the Motown story, and I can’t open up and love it.