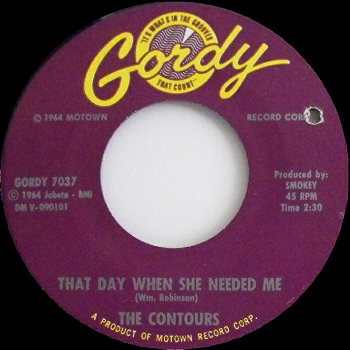 Okay, that was a surprise.

Not for the first time here on Motown Junkies, these pesky Contours throw me a curveball. Just as I’ve got them pegged as Motown’s most affable, acrobatic dancers, a rough and ready gang whose stock in trade was big, dumb, raucous dance tunes aimed squarely at moving the feet rather than the heart… now here they turn in a beautiful, low-key rendition of a wistful Smokey Robinson ballad. They don’t sound like the Contours at all, they sound like the Temptations teaming up with the Miracles.

Smokey didn’t do much work with the Contours, but this is a forgotten gem. If it was a shock for audiences in 1964, it was too much for Motown’s Quality Control team back in the summer of 1963, when this was recorded (and when all was rosy in the Contours’ garden, before their acrimonious near-split and lineup change). Original Contour Joe Billingslea takes up the story in the liner notes to The Complete Motown Singles: Volume 4: 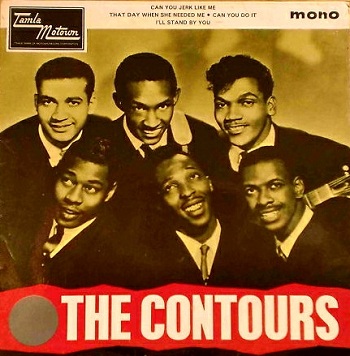 “People heard it around the studio and said ‘who’s that new group?’ Berry Gordy said: ‘Who’s that singing that song?’ They said ‘the Contours!’ Berry said, ‘the Contours? Oh no no no, we can’t have ’em singing like that! No, no, put them back in their groove! Take them out of that bag!’… We were showing our versatility. But Berry was smart. He HAD smooth groups, pretty groups, singing groups. We were the rowdy group that was noted for our choreography. We’d tear up everybody.”

And you can see Gordy’s point – this sounds nothing like a Contours track. Even if the harmonies aren’t quite all there for this kind of heart-on-sleeve endeavour, it’s still a really beautiful song. I don’t know for sure that it’s the Miracles’ guitarist Marv Tarplin plucking the strings, but it certainly sounds like him. Eddie Kendricks would have been happy with the lovely lead vocal, dovetailing with the other Contours in literal call-and-response fashion, answering their questions.

…I finally got home tonight
(…What did you find?)
My baby had split the scene
(…Where did she go?)
Over the mountain and across the stream
(…What did you do?)
Tried to follow her every track
(…How come?)
I had to try and get my baby back…

Plus, once again Smokey the writer-producer (who must surely have known full well his decision to get the Contours to play against type would meet with resistance) still refuses to phone it in, providing a lovely lyric full of regret, the narrator cursing himself for not having tried harder to be there when it mattered. It’s unexpectedly touching, and it’s given a sensitive reading full of feeling – quite a turnaround considering these are the guys who at one point seemed to be having trouble reading a lyric sheet (cf the intro to Don’t Let Her Be Your Baby.

Indeed, it’s hard to believe these are the same Contours who’d made such a cacophonous, unlistenable hash of their previous attempt at a sweet ballad, the execrable Funny, one of the worst Motown records of all time. But this is in a different league.

Smooth and pretty, as Joe Billingslea noted, and really very sweet. It’s also completely out of character for the group – if you were asked to identify these guys on sound alone, “the Contours” would be the absolute last answer you’d give – but no worse for it. Nice surprises are the best kind of surprises, after all.