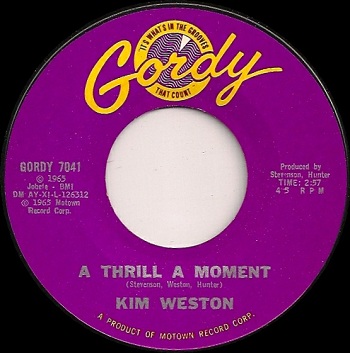 Following on from a run of three excellent songs from Kim Weston – A Little More Love, Go Ahead And Laugh, and most recently I’m Still Loving You, which had looked like her ticket to the big leagues – this new single, which marked her switch from the Tamla label to Gordy Records, seems like something of a backward step, both artistically and commercially.

It’s very odd, this. For a start, it sounds as if it’s ten years ahead of its time, for good and ill; the rhythm track is so clipped, with so much treble reverb, and the rolling, twanging guitar riff locked so tightly – mechanically – into place, that for a modern listener it can’t help but call to mind syndrums and tape loops and artificial horns. Combined with the flurries and eddies of strings, and Kim’s loose, loud vocal (over the top, in every sense), it’s almost a herald of a new age, something dark looming over the Motown horizon: the shape of things to come in a few years’ time, once the Funk Brothers had all been sacked. Are we absolutely sure this isn’t from 1975?

And yet, for all the future echoes, it doesn’t actually advance the Kim Weston story, doesn’t take us to anywhere Kim really needed to go. Writer-producers Mickey Stevenson (soon, of course, to become Mr Kim Weston) and Ivy Jo Hunter were settling into a groove working with Kim, who even copped a writing credit in her own right for both sides of this single – but as a follow-up to I’m Still Loving You, A Thrill A Moment builds on everything its predecessor had going for it, both good and bad. So, along with the ample opportunities to show off her incredible pipes, Kim is also saddled with a strident, self-aggrandising, almost bossy arrangement of an overbearing song.

It’s quite the vocal showcase, certainly, Kim on a mission to show her phenomenal power and range; coming hot on the heels of Diana Ross, it’s hard to imagine a greater contrast. Her full-on, ignore-the-backing, almost acapella style performance (she very much ploughs her own furrow here, paying practically no heed to what the musicians are doing behind her, so much so that they might as well have been dubbed on afterwards rather than the other way around) is striking, and in places it’s positively breathtaking.

But it’s not a good song, and there’s nothing Kim can do to change that. Indeed, she does everything, which only makes things worse; it’s a song of tender devotion and total, joyful abandonment, but the melody is plodding and more sedate than the production tries to make it. You’d think a vocal approach which involves Kim smashing down all barriers and just letting herself go would suit the material, improve the impact of the song, but instead it just ends up sounding overdone, leading to a messy and cluttered record.

What we have here, really, is too many ideas – quite a different problem than the more commonly-seen lack of imagination, but just as difficult to overcome. Rather than decide what this is meant to be – a power ballad, a torch song, a sultry purr, a wistful happy number, or something that might have graced a Seventies Motown compilation – the record instead tries to have its cake and eat it, and it never properly works. The production is a surprise (whatever happens with the proposed 1972 sets, there isn’t going to be a Complete Motown Singles: Volume 15, but if there were, this would fit right in without raising an eyebrow), and Kim’s voice is capable of breaking bottles at fifty paces – but those are just some of the ingredients for a great record, and nobody’s brought the recipe.