b/w Had You Been Around

B-side of Had You Been Around

Motown boss Berry Gordy had long cherished ambitions of breaking the MOR and easy listening market, and in pursuit of that dream he’d signed up any number of past-it crooners and lounge singers whose stars were on the wane. But nothing could have prepared observers for this.

Billy Eckstine, Mr. B himself, by some distance the biggest star Motown had ever signed, had spent two decades as one of the highest-profile black men in America. One of the first African-American entertainment stars to genuinely “cross over” into white living rooms, he was a bona fide showbiz legend of stage, screen and records, a tyro jazz and bebop bandleader (he discovered Dizzy Gillespie, among others) who’d astutely seen the way the wind was blowing and transitioned seamlessly into an early-Fifties pop star, a perceptive interpreter of other people’s songs and a clever writer of his own, with a baritone as smooth as glass and as mellow as fine Scotch. And he was handsome. And he was sexy. Billy Eckstine was the whole package.

He was 51 when he arrived at Hitsville, his place in the popular music scene taken by younger acts (not least Nat King Cole, who essentially superseded Eckstine as late-Fifties America’s favourite handsome black man singing MOR-jazz standards), but unlike some of Gordy’s other MOR signings there was still plenty of talent in evidence, plenty of fire burning in Eckstine’s heart. 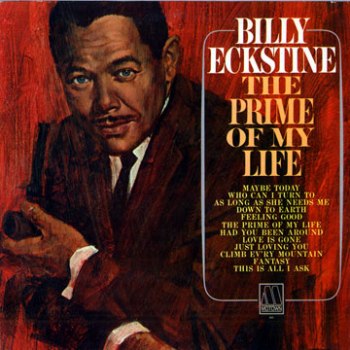 As if to underline the point, Motown wasted little time recording a new album (left), released under the perhaps-optimistic title The Prime Of My Life. You’d have to be crazy to name Billy’s Motown years as the peak of his career, but he stayed with the company for five years, putting out three albums and seven singles, and he took what he did as seriously as ever. Nothing Billy Eckstine did was ever half-hearted, or sub-par, or lacking in attention to detail.

(There’s a picture of him in one of the later volumes of The Complete Motown Singles series, sitting in the booth poring over some notes in a pullover and shirt sleeves, his hair greying and cropped close, thick glasses perched on his nose, a cigarette and a mug of coffee in his hands; Mr. B becoming an old man. It was a real shock to see it, because no matter how old he got, I imagined him to be eternally dapper, immaculately-groomed, with a youthful glint in his eye. I half expected to read he did all his recording in top hat and tails.)

The ultimate feather in Berry Gordy’s cap, you might think, except that most of Eckstine’s Motown 7″ cuts are – to a lesser or greater extent – meandering bilge. Too late to be pop hits, too early to be nostalgic throwbacks (and, indeed, too early to catch the wave of TV-advertised compilation albums that would have secured his place as a legend for a new generation), Billy’s Motown years saw him trapped in a strange kind of parallel universe, castigated for being stuck in an outdated musical rut but then largely discouraged from trying more adventurous paths.

Billy worked with a number of great Motown producers, all of whom must have jumped at the chance to work with a model pro – THE model pro, I suppose – rather than callow gum-chewing teens just out of school, and as his The Motown Years anthology shows, they weren’t afraid to try new things out on him, but by and large those were left unreleased in favour of standards and pseudo-standards. Which brings us back, rather neatly, to Down To Earth.

This is another pseudostandard published under Motown’s Stein & Van Stock imprint, a publishing house set up to sell sheet music and songs to white producers, artists and audiences, with big-name Motown songwriters given new, false, Jewish-sounding names to complete the Tin Pan Alley illusion (there was, of course, as regular readers will know, no Stein and no Van Stock at Motown, these being more fabricated names).

Classy, right? Except that most Stein and Van Stock numbers are not destined for the Great American Songbook, and not because of stubborn racism so much as a flat-out lack of quality. Down To Earth is almost the very template for this story.

There’s an anecdote in The Complete Motown Singles: Volume 5 which has Berry Gordy arguing furiously with Ron Miller about the lyrics, Gordy insisting there be some kind of emotional hook, that the song should finish “Down to earth… WITH ME”. Miller resisted; the single was a flop, and Berry believed he knew why. But he was wrong. Eckstine sings this so well that it doesn’t feel abstract, or airy, or lacking a personal connection; it’s just not a very good song.

Still, though, even if the material is uninspired and slushy, well, DAMN is it beautifully sung. Unlike Motown’s other crooner signings, Mr. B is in excellent voice, and he gives a spectacular performance, ocean-liner smooth despite the ocean-liner-cabaret song. It’s a showy, pasty kind of a number – like Bobby Breen’s less credible efforts, it sounds like something that might have been the would-be show-stopper for a failed Broadway musical that once ran for twenty nights (plus a short-lived revival in Cincinnati) – but Eckstine’s vocal is spectacular, lifting the record far, far above wherever it might have been headed without him. Far beyond where it has any right to be, I suppose.

This shouldn’t be taken as any kind of a recommendation – the song’s still a sticky, stodgy mess, and any success Billy brings to it is only success measured on its own terms, as a serviceable piece of MOR pabulum rather than the heartstring-twanging anthem it was meant to be.

But it’s so immaculately presented, so well turned-out, so very slick, that it’s hard for me to dislike it quite as much as it no doubt deserves. This may be many things, but it’s certainly not another half-assed attempt at a late-career revival for a washed-up has-been; Mr B. can still bring it.