b-side of This Time Last Summer 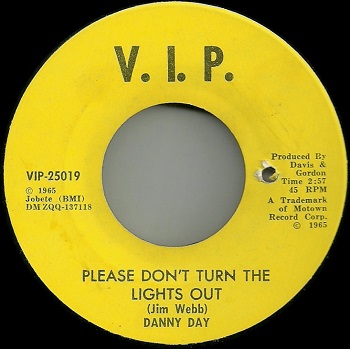 A markedly less good song than the A-side, but paradoxically a considerably better record.

“Danny Day” – a nom de plume for the great Motown LA office chief and writer-producer Hal Davis – had all but ruined Jimmy Webb’s Motown songwriting début on the A-side, This Time Last Summer, a lovely song but featuring one of the worst Motown lead vocals of all time. Here, Danny is on safer, blander ground, and his vocal is far more suited to the material, his wavering, straining falsetto used more for atmosphere than for carrying any kind of a tune. The results aren’t particularly pretty, but they’re not awful, so we’ll call it a win.

There’s more than a hint of early-Sixties organ soul in this one, immediate influences instantly springing to mind (Chuck Jackson’s version of Any Day Now, or its copycat, the old Eddie Holland/Temptations cut I Couldn’t Cry If I Wanted To) thanks to the prominent keyboard riff (which feels like a direct lift in places). But there’s little of the playful spirit of those records here (never mind the morose words, the music itself is dirgey and mournful, verging on sounding like a prequel to A Whiter Shade Of Pale).

If the song itself is a stodgier, less ambitious affair than the topside, there are still some excellent moments; the frequent dead air stops broken only by someone bashing the high keys on a concert piano are intriguing rather than irritating.

Also, Danny’s voice is better suited to the song, which almost makes a point of isolating him from the rest of the music, leaving him hanging high and alone as if to reflect the hopelessly plaintive lyrics.

The biggest plus, though, has to be that at no stage does Danny’s vocal provoke unintentional giggles (a real problem on the A-side) by desperately lunging for notes he hasn’t a hope of reaching. Not fantastic or anything, but not an embarrassment either, this is a definite improvement.

Don’t take that as any kind of a recommendation, it’s still not particularly good, but – probably more to do with Webb’s song than anything else – there’s something in this that’s made me warm to it, even if I can’t pin it down. Whatever it is, it’s made me a little unhappy we won’t get to hear any more of this intriguing Davis/Webb partnership; there would be no more Motown singles for Davis as an artist, whether as “Danny Day” or anyone else.